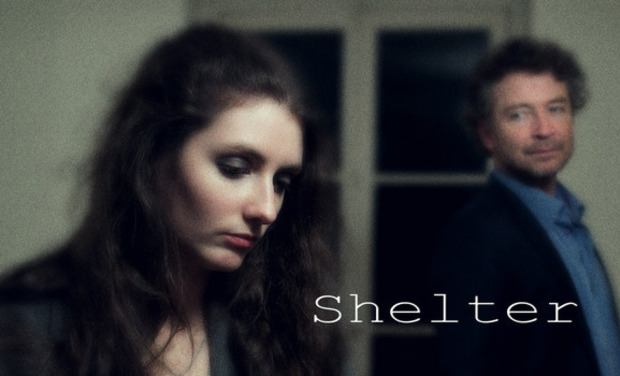 Suzanne arrives at Dylanʼs flat from nowhere. Like a child in a woman’s body, she has no concept of jealousy, sex or death. All she knows is her devotion to the man who gives her shelter. And while she knows that in the outside world Dylan is a bad man, she is happy as long as he comes home, and as long as he brings back food. But Dylan doesnʼt bring her food anymore...

A few words from the director :

I wrote Shelter almost instinctively, in three hours on a Friday evening. The first image entered my mind, and everything else followed. The story haunted me in the following days and weeks, as I searched for it’s meaning, and I hope the same will happen to those who watch it.

I don’t want to write too much about the film here, as I’d love you to discover the story for yourselves, not in words, but in moving pictures… But here are a few things I will share with you, that will hopefully give you enough of a taste to want to see more:

-The film takes place entirely within the apartment of Dylan, we are left to discover and imagine their lives outside of the apartment through Suzanne’s eyes and words.

-Suzanne paints a tree on Dylan’s walls, it grows during the course of the film, as she quietly makes his apartment her own.

-Suzanne may seem to be innocent, or naïve, but there’s something deep down in her instincts, in all our instincts I think, that isn’t innocent at all…

My intention is to make a film that stays with the audience like an unsettling dream.

With the story, the crew and the cast we’ve assembled to make the film, we have a really beautiful film in the making.

Rather than try and describe her, I’d encourage you to take a look at some of Lizzie’s work as a model & a photographer, I think it will be immediately apparent why I wanted to cast her as Suzanne. To me her face carries a combination of innocence and history. There’s something not of this world about her. In person, she walks like a broken doll, she is simultaneously nervous and disarmingly open. Once I had met her and talked about the film with her, I really couldn’t imagine anyone else in the role.

Paddy is an actor, singer and musician with great talent and incredible charm. To me, there’s something much more sinister in the bad man who knows how to smile; who knows how to hold his friend close in order to stab him in the back. Not only does Paddy carry that charm on his face, he acts with a presence and subtlety of gesture that is going to beautifully reveal the weight of his world outside.

A few words from the producers :

The film is full of simplicity, Suzanne talks as a child and Dylan just accepts her in his life.

But this simplicity has a many layers of meaning, a more complex understanding, and this complexity will allow each member of the audience to perceive the film in different ways.

I also fell in love with the images in the script. I believe that a film must have a graphic intention; it must be visually attractive. And Suzanne’s tree promises to provide nothing but beautiful images. This image has many symbols and it’s growth has for me the most important significance of all, it represents Suzanne, and all that her instincts lead her to be.

These are two characters that are bound by nothing, that don’t need words to understand each other. While their relationship may be complex, they, simply, accept one another…

To know more about our previous work, and that of our talented cast and crew, please take a look at the following links :

On this project everyone is putting days, weeks of their time into this film without taking a cent for it

The director have made quite a few videos before on virtual zero budgets (If you check out of the genero.tv competition films on my site, the total budget for each of those was €500 or less). On this project he is fortunately surrounded by a team of incredibly talented people who seem to be willing to put their time and skills into these creative projects, for, I presume, the simple joy of making something beautiful that we can all be proud of…

The founding will help on :

We’ve found it, and the owners have been kind enough to let us have it for a fraction of the cost they normally charge film crews.

We could shoot with my little 7D, but with all that we are putting into the film, and with such a visually evocative story, we think it’s worth hiring a great camera (C300) , lenses and lighting kit to give the film a truly cinematic feel..

We need to grow a painted tree on the walls of the apartment, and then take it back down without leaving a trace. We can get the paint & materials for performing this magic trick this cheaply, but not for free.

We need a costume and make up for a special effect shot. The rest of the costume come from the actors and gifts.

Feeding a cast and crew of 20 people for three days

On top of the money we are looking for here on Kiss Kiss Bank Bank, the director will be putting of his own money. But to make the film as we see it, we’ll need just a little more… So if you can find it in your heart (and bank account) to help, please do! Of course we know many of you don’t have money to spare, but you can still help us by sharing this link with your friends, we’d really appreciate it…