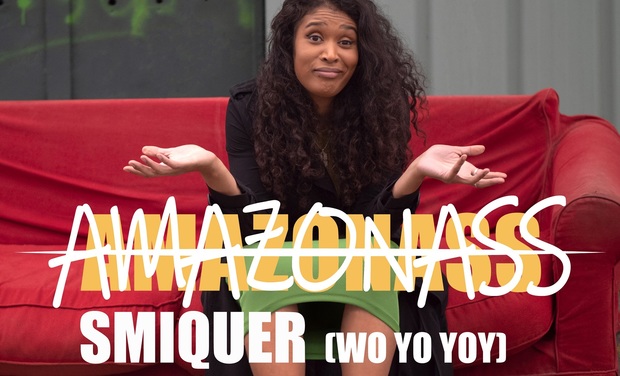 I'm AMAZONASS and "Smiquer" is the name of my first single.

The song is about financial woes of someone earning minimum wage, called SMIC in France (Salaire Minimum Interprofessionnel de Croissance = Growth-indexed  minimum wage). So I came up with a new verb : Smiquer !!! So you need to take the song at second degree but it still real-world! The current climate in France is very favourable for the audience to listen to my song, now is the time!

That piece I composed and wrote is a mix of UK Grime (british hip-hop), house garage and Caribbean carnival music. The rapper Great Nivek (a cousin!) is co-composer and also interpreter on this single, because we hear his voice in addition to mine!

I have already financed a good part of the project: shooting the video clip (of which I am the director), developing the cover of the single, a logo, creating a website in progress, designing posters and I recently started a promotion campaign on social networks, and especially: the song is already produced, recorded, mixed and mastered! The official release will be in a few days on all streaming and download platforms!  I will give you the exact date of release shortly!

All I have to do now is make a good promotion for the release of the single and this is the most difficult part of the project and that's where I need your support!

Indeed, I speak in the first person because I don't have a team working with me, I am alone in managing my project while waiting to rob a bank*. (*)This is a joke lol

You have seen above the teaser of the clip and the single SMIQUER. It was deliberately made in an amateur style to have a popular look but the clip will be of professional quality!

On "Smiquer" I rap, but I am a singer of Soul, Jazz, RnB, Blues, Rock. On the other upcoming tracks on which I am preparing, I will be heard singing in the musical styles mentioned above with always a touch of hip-hop.

Here I am in a jam in a Rock-blues-funk style:

Here is another video on which I sing Soul music "Ain't no sunshine" by Bill Withers:
And on the following video I sing the jazz standard "Fever":
Coming back to the single, the clip will have a festive and offbeat atmosphere despite the serious subject that concerns many of us!
AND WHO AM I?
In addition to being a singer, I am an actress, director (among other things, I directed and acted in a play in Paris, called "A la nuit, la nuit" by François Billetdoux) and have already directed a video clip for NH l'impact, a rapper (and cousin!). I am also a hip-hop, house, samba, African dance, Caribbean dance dancer: I have danced in several shows and give dance classes from time to time.
I am also a martial arts and combat sports practitioner (capoeira, taekwondo, English boxing) and before that I practiced Vovinam Viet Vo Dao (Vietnamese martial art) where I was champion in combat! Otherwise, I earn my living as a waitress.

The minimum indicated for this project is €500 but I need more funds but even if I only reach this amount I will release this single, with or without money for promotion, AMAZONASS's honor!  But the more donations you make to me, the better I can make this project a success! I will keep you informed of the evolution of the expenses incurred to promote Smiquer!

I have not planned to use physical media because I don't have the logistics to do it and I am a young artist in self-production, this sales support will bring me more costs than benefits. I prefer to use the sum of a CD production for promotion.

For each level reached, here is what more I can do! Each amount includes the 8% crowdfunding fee (5% commission for Kiss Kiss Bank Bank and 3% bank fee).

€500 : Editing the clip (if I don't reach this amount, I will edit it myself, but it would be better if a professional editor did it)

€1000 : Printing of postcards + shipping costs for rewards (I will be able to honour the sending of promised postcards as rewards only if I reach 1000€ of donations)

€1150 : Printing of posters + shipping costs for rewards (I will be able to honour the sending of posters promised as rewards only if I reach 1150€ of donations)

Over €1150 : Rental of physical and digital advertising spaces!

Over €10000 : I can start recording my next track but I'll still continue the promotion to Smiquer!

Over €25000 : There I will have a very, very strong promotion!!! And if you give me such confidence, I'll organize a showcase! The top 5 donors from €50 to €199 and the top 10 donors over €200 will be invited with a person of their choice! I'll sing Smiquer of course and soul, r'n'b, hip-hop covers. Maybe I'll even sing one or more songs in preview that will be released on my album, depending on the progress of its preparation.