Help us by participating in the making of our first album! 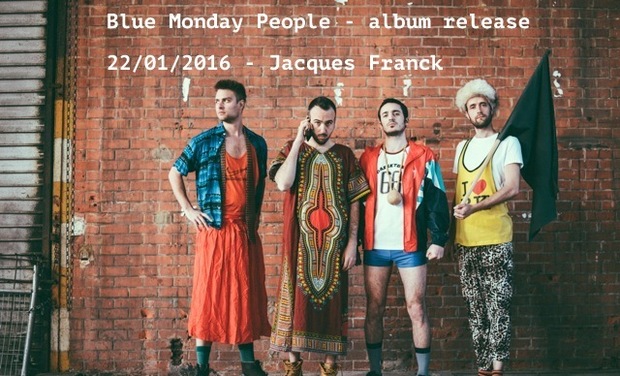 Back in Belgium he created the band Blue Monday People.François composes songs that are inspired by the cultures and the people he met during his many years abroad.

Blue Monday People is a subtle mix of European spleen and blues coming from the Americas. François' pieces are urban tales influenced by the good, the bad, the ugly and the ordinary of Mankind.

Few words about the musicians

François Vaiana was born in 1982 in Liège, Belgium, a city he never lived in. He attended schools and universities in Brooklyn, Brussels and Ouagadougou. Before being a full time musician he worked many jobs in different fields: real estate, supermarkets, dental clinics... just to name a few. So far he hasn’t received any awards for his music. His chief interests apart from singing and songwriting are reading books, understanding historical monuments, watching food cook, traveling with people and being alone.

Dorian Dumont was born in 1988 in Montpelier, France, a city in which he fed verociously on classical and chamber music. He changed musical orientation for many reasons, mainly because of Thelonious Monk, Brad Mehldau, Radiohead, girls, Dennis Bergkamp and his mom and dad... he claims their are 457 other reasons. He performs with various people in various groups of various styles such as "Jens Maurits and his Orchestra", "Lift", "Blindsight" and his own trio "La Volte". All in various places. Various.

Jens Bouttery was born in 1988 in Oostduinkerke, Belgium, a small town by the seaside. His parents still own the family house. He was awarded the Toots Thielemans Award from the Brussels Conservatory for his project «The Dubtapes» in collaboration with filmmaker Daan Milius. On top of playing and composing music for many theatrical productions, film soundtracks and a selection of bands, he likes constructing things by himself such as desks and html websites. He also enjoys driving nice cars and anything related with water.

Benjamin Sauzereau was born in 1984 in Le Mans, France where he spent all his childhood and teenage years. He started his adult life studying English but soon turned to playing guitar. He is currently a full time musician in Brussels and plays in many bands such as «Les Chroniques de l’Inutile» and «Le Chien à Trois Pattes». Aside from playing music he is a comic-book aficionado and enjoys people when they laugh but also when they are silent.

This is what is left to do in order to release, promote and distribute the album:

The album budget is 15000€, we have already spent part of the budget for the recording which is in reality the biggest expense of the making of the CD. We have spent roughly 7500€. We have used all of our savings and that is why we are launching this Kiss Kiss Bank Bank.

We have already spent:

What is left to do in order to release the album, promote and distribute it:

We have received a production grant for the creation of the album from the Fédération Wallonie Bruxelles of 6500€.

We have spent all our income, that is why we are launching this Kiss Kiss Bank Bank.

A private moment with musicians before the cocnert on March 11 + Entrance and dinner for a concert on March 11, 2016 at Théâtre des Deux Marronniers (Corroy-le-Château-Belgium). Good vibes, good energy + Album signed by the members of Blue Monday People + Printed photo format 10cm x 15cm signed by the band members of Blue Monday People + Personalized thank you on the band's website + Personalized thank you on the band's social media