The disappearance of pollinating insects is alarming. SOS Abeilles participates in preserving species without which life is impossible. 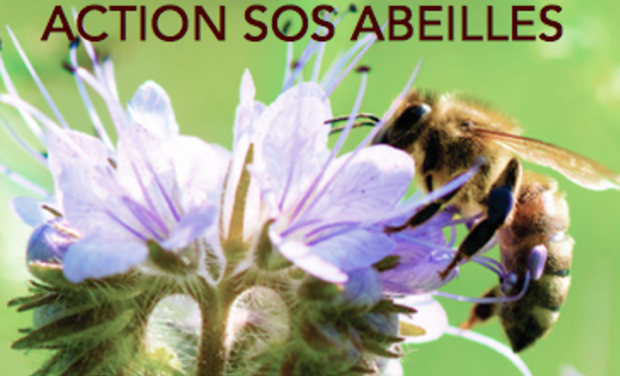 The disappearance of pollinating insects is a planetary catastrophe. It threatens the reproduction of most plants, and the life of animal and human species.

In 2015 we have already observed the disappearance of:

- 50% of “Apis Mellifera bees” that humans exploit for hive products. They represent 10% of all pollinators of the globe.

- 60 to 80% of wild pollinators, depending on geographical areas of human activities, agrochemicals and sometimes even 100% of all pollinators, which is increasingly common.

These insects usually pollinate 80% of crops and all plants on which humans depend (trees, flowers, medicinal plants…). And terrestrial plant world produces 15% of the oxygen we breathe.

Once, 85% of land was covered with primary forests that has now been reduced to 8% + 12% of timber forests. These 8% of primary forests are still home to 55% of the planet's biodiversity and the world’s flora produces 15% of the oxygen we breathe. Between 2000 and 2012, 231 million hectares of forests (4.2 x the surface of France) were destroyed and it's going on non-stop, 28 hectares per minute, which is equivalent to 50 football fields.

Currently, 70% of the land surface is already affected by desertification.

The plant world cannot exist without pollinators. Our planet without plants would be a desert.

Pollinators are among the biggest victims of deforestation and livestock farming, the main causes of global warming.

And for centuries, for various interests, humans have exploited and mistreated bees. This is one of the worst abuses in the living world, even more dramatic than has yet been recognized.

A significant part of the world’s population can no longer produce enough food due to the absence of pollinators.

Today they have to rely on imported food of low quality. Those imported products, originating from food surplus are often the cause of health problems.

People in rich countries ignore this tragedy though they are the key players and the main consumers (deforestation, animal husbandry, intensive agriculture, use of agrochemicals, pollution…).There too, the number of pollinators has declined significantly and many species have disappeared forever. Unfortunately it gets worse every year.

Faced with this alarming situation, the SELVA association created the SOS Abeilles project, to allow bees not to suffer the consequences of human folly, which plunders the fruits of their harvest and their lives.

To be precise, SELVA builds handcrafted shelters made of larch wood from the Verdon Valley, in which swarms of bees will find a natural habitat.

A shelter is made entirely of larch wood with a double layer of grooved planks that make up its roof in a traditional wooden tile technique practiced in some mountainous areas.

It is a cozy space for a swarm of bees in search of a place to live or in transition from operating to freedom.

Usually, a year after being installed, some of the bees swarm and a new colony is born, made up of free bees.

When hives are obtained from local beekeepers, the emphasis is on disturbing the bees as little as possible. The shelters are adapted to the size of the frames on which they have already organized their lives.

Each shelter is placed according to various biological parameters and in coherence with bee life and activity.

Organized by unit in order to avoid competition between them and other pollinators already present, they are placed:

. Away from human settlements and activities

. On plots of land that are free of agrochemical pollution

. As far as possible from areas high in electromagnetic concentration (antennas, power lines...)

. At a reasonable distance from apiculturists in order to prevent genetic pollution.

. In areas with sufficient shade

. On land with a suitably rich flora

They are regularly observed to ensure that the bees are in balance and preserved from predators such as the Asian hornet.

Where we lived we were too numerous for the available space. So a new queen is born and some of the people swarmed with the old queen. We are there, curled in a tree waiting to find a place to build a new nest.

Here we are in this new space with which we familiarize ourselves and where we are intermingled to optimize the ideal temperature for the production of cells.

To build our nest and make our storage cells, we collect and gather pollen that generous Nature offers us.

For months, thousands of bees will work to the death to organize and build the hive. Cell after cell, we build the shelves where our children grow up and where we store our reserves of honey and pollen, the only foods suitable for bees.

Obviously, to respect their intimacy, once installed, shelters are no longer opened or moved and the fruit of their harvest is never removed!

All individuals, groups, local councils can sponsor this action by setting up shelters on their land or territory. SELVA welcomes each proposal that incorporates the previously mentioned criteria.

SELVA organizes films and debates on the situation faced by pollinators, the alarming consequences of their disappearance and the possible solutions.

Wherever you are, if you are interested in this action and want to perform it in your region or your country, of course we share our knowledge and know-how. If you have other ideas or solutions please contact us. We really hope that this action arouses a surge of sharing and creative meetings.

We are all inhabitants of this jewel we call Earth.

Our activities and consumerist habits have often an irreversible impact on our planet.

Let us respect what is most precious to us.

In our everyday life and through specific actions, individually or in common, let's be aware and responsible actors of this subtle alchemy that gives life.

Together let us act before it becomes an irreversible ecological disaster.

To you all, thank you for your attention.

The sponsorship money will help us finance 50 swarms of bees and their shelters as well as the extra-expenses.

- Swarm of bees: Purchase of the swarm + traveling expenses

- Setting up the swarm and its shelter in its suitable environment

1st it is necessary to locate and prepare the space where the shelters are to be placed.

Then 2 people are required to carry the shelters to wild areas away from roads.

The setting up takes place at night so that all the bees of the same swarm are together when displaced. Indeed, if their transfer takes place during the day, the bees gone to gather nectar are not able to find their nest and are likely to die.

As it is difficult to anticipate, we apply for this application an estimated expense of 80 € per shelter.

When we started this project in 2013, we designed and built shelters with tools unsuitable for mass production. To optimize their production, we now have selected good machine tools manufactured in Europe. They are of high quality and safe to use.

Total amount for the project:

Of course, “SOS Abeilles” doesn't limit itself to 50 shelters, and with these new machines, many shelters will be manufactured.

If the forecast amount of the collection is passed, money will be entirely invested in shelters and additional bee colonies, under the same conditions.

SOS Bees action resulted in creating a job and buying a vehicle.