HELP US TO REVERSE THE DENIAL ! LET THE VOICELESS BE HEARD ! 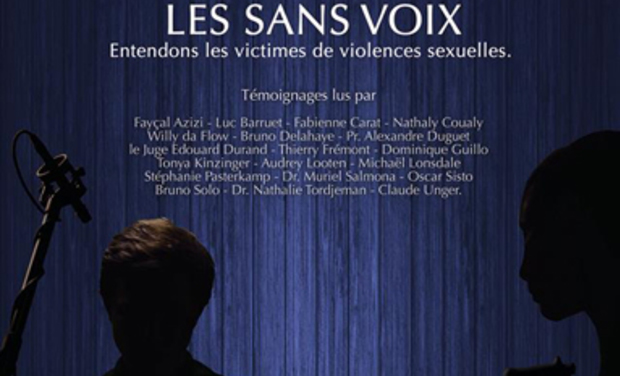 The VOICELESS, are these women, these men, these children, victims of sexual violence. Faced with the violence of the destruction of their intimacy, they very often lost their footing.

The goal of this project that we invite you to support is to allow these victims to finally have their voices heard. It is time for solidarity, to listen and support these people, too often abandoned and condemned to silence in the midst of a society where the reality of sexual violence is still the object of massive denial.

You can help us: thanks to your donations, we can bring this project to fruition and through it push back the denial.

We have two objectives and two deadlines.

Our first objective, in the short term, is the showing at the Luxembourg Palace, on march 2nd 2015, during the Symposium “ Inquiry of Gratitude”, of one of the chapters of this project: STOP THE DENIAL, in support of the campaign of awareness STOP THE DENIAL http://stopaudeni.com/, organized by Dr Muriel Salmona, psychiatrist specializing in psychological trauma, President of the Association Traumatic Memory and Victimology. http://www.memoiretraumatique.org/

The part of this project that will be shown, reveals anonymous stories of victims of sexual violence (women, men, children, the elderly), read by personalities from the spheres of theater, politics, medicine, justice, associations and media.

Teaser of The VOICELESS

At fruition, these images will be integrated into a 90 minute fictional movie that will be submitted to several  televised chains.

These stories that have been filmed have as a goal to increase our awareness of the grave and systematic psychological and traumatic consequences of rape.

It’s about better understanding the why of the behaviours of the victims, what they live.

It’s about recognizing their suffering, to better accompany them, to help them resume the course of their lives, et render them their dignity.

Each member of the filming crew has personally invested so that we can create this film. Our common goal is to give the victims of sexual violence access to having their voices heard.

To do this, we have had to be supported and assisted by media personalities, ready to make people hear the voiceless.

At the technical level, we have had the opportunity to have a famous star from the world of cinema by our side, who has received a number of Cesar Awards for the films on which he has worked: Vincent Tulli

And here are some of the people who will read the victims testimonies on film.

Some links that support us:

The funds that we will collect will contribute to:

Technical support for 6 days of filming

If we manage to collect 4000 euros, we can film using one camera. With more than 5000 we will have 2 cameras and finally above this amount, we can pay our director and our technical crew!

THANK YOU!! ALL DONATIONS ARE IMPORTANT!!!