Survival Park / La Montagne Cosmique : a film and a journal to decrypt the 2012 end of the world in Bugarach (France) 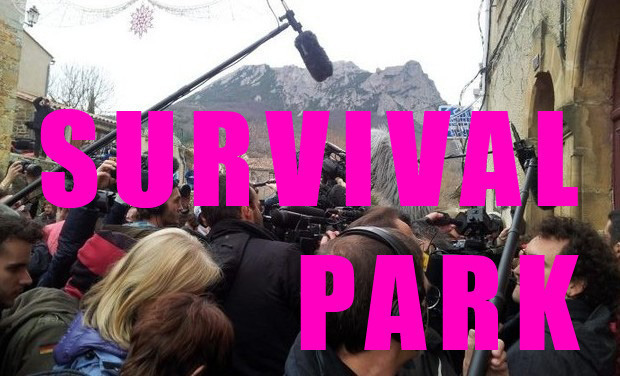 Survival Park, end of the world in Bugarach

In recent years, the Pic de Bugarach, old mythical mountain in the Cathar country, tourist destination of international speculative esoterism, was designated as the place that would be saved from the end of the world announced for December 21, 2012. A large theater anxiety was then carefully deployed around the small village of Bugarach. The non-event was indeed an opportunity to deploy a military-media system to support the precautionary principle of institutional occult against possible excesses of sectarian autonomous communities or isolated irrational followers of the belief in the presence of extra-terrestials on Earth or simply the non-explained. The mountain would be fenced to prevent access. The village became a headquarters of the dispositif. A "survival park" was put in place. How to navigate in an environment like this? How to maintain autonomy and sovereignty metaphysics when the only two offered alternatives are to be part of the device or observe a remote derision? The Association of Autonomous Astronauts, a collective phantom questioning post-communism, millenarianism and cosmist metaphysics of its time decided to set out to conquer the summit as a light brigade...

A film crew was sent to Bugarach for the realization of a film essay decrypting the catastrophic psychosys generated around the Pic de Bugarach, a mountain in the heart of the esoteric Aude and designated as one of the planetary locations saved by the end of the Mayan world of 21/12/12.

The team moved into the "forbidden zone" set up by the authorities from 18 to 23 December. During these 5 days of closed access to the Pic, the initial core was joined by various collective, autonomous astronauts and individuals, and has collected a rich multimedia material in good technical conditions, without any major problems. The rushes of the film are good, we hope to make a film about forty minutes to be presented in preview at the Bandits-Mages Festival in Bourges in November 2013.

The Association of Autonomous Astronauts produced "La Montagne Cosmique," a 32-page tabloid newspaper (in french). This publication exists only in PDF today. This corpus was designed by AAA as a metaphysical survival kit to "navigate in several directions at once" in the period of the worldending show.

Newsletters were distributed inside the closed area of Bugarach, and have analyzed the esoteric, political and media construction of a myth of a "cosmic mountain" in France. "La Montagne Cosmique" brings together all of these texts.

We need financial support to complete the editing, subtitle in English, organize post-production, make the DVD of the movie "Survival Park". And we need support to make "La Montagne Cosmique" on newsprint, black and white tabloid format (in french). This unique edition will be published on the occasion of the release of the film and its presentation in preview at the Bandits-Mages Festival in Bourges in November 2013.