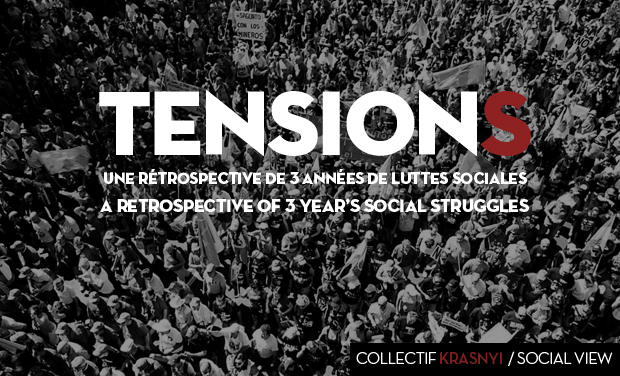 « TENSIONS » is a magazine  presenting  a three year  retrospective of  the work of the Krasnyi Group -  a full  three years of social reportage.

Beyond this book, we wish to develop, a photo exhibition, also dedicated to our three years of coverage of social movements,  in Belgium, France, Spain, Turkey and elsenwhere.

« TENSIONS » is part of a collective effort. The images will be the brainchild of 6 photographers and the texts will be written by social movement players.

The magazine will be in two languages: French and English.

We need your support to maintain our independence and successfully implement this entirely self-produced project.

Words and pictures for those who stay in the shadow.

With our images and  the reports  of the witnesses presented on the photos,  with  texts written by activists and people in the field, we would like to embody  and give  voice to those we followed or met in the last three years.

Traditional  television channels or newpapers devote very little space to people  living or surviving  despite the avalanche of budget cuts,  job cuts, the reduction of allowances, the increasing cost of living and housing or to those who face an increasingly restrictive immigration policy

These struggles of families to get by or of  people who organize themselves  to resist or change things, are too rarely found in the flow of media information. Yet they compose our daily environment which we would like to focus on.

So this retrospective aims  to broaden our visibility, and somehow their visibility.

Specific topics within a general  area.

During our various reports, some themes have been recurrent, such as housing, immigration, employment  and many more.

Eleven have been selected  specifically,  grouped  by chapter.

The link between all these themes is the problem of a society that is more concerned with generating money than caring about the welfare of its citizens.

Beyond the evidence,  the focus will be firstly on how the society is imposing precarity  on a majority of people who thereby  pay for the crisis , and secondly to highlight the  permanent struggle of the victims of its social injustices.

Founded in January 2011, we are a group of enthusiasts with a passion for images sharing the same uncompromising vision of the society in which we live.

Sharing the same interest in the social movement, the founding members decided to adopt  as their main axis,  a militant and socially engaged photographic and video work  .

The political, social, economic or environmental tensions  that run through our society convince us to be urgently in the field and to document the various forms of resistance that are being  developed.

With our resources, we aim to build an instrument to give voice to the social players and  to those left behind, victims of a system that leads them sometimes to poverty, sometimes to revolt.

The image that moves us and unites us  is the image as a weapon for social change.

Our aim is to share our various reports, our meetings with a wider audience through the publication of a self-published paper magazine, as well as through the implementation of other communication media (photo exhibition, posters) .

This project will therefore not stop with  the sole issue of our magazine but aims to expand our visibility through different means.  Thus, for the release of  « TENSIONS »  is also for our Group . It will not only allow us to present the culmination of three years of work, it will be also a first step towards more thorough and regular work on the social scene.

This ambitious project primilary reflects a high level of personal investment in its inceptors.

First, the time spent developing reports, sometimes investigative work. Then, in its implementation which includes selection, editing, research contacts for drafting the text. And finally, much work to carefully layout the images so that they resonate with each other as much as with the texts.

But the birth of « TENSIONS »  also requires an investment of money.

Upstream of the magazine, we have funded our trips ourselves, our on-site accommodation, etc. We bought our own camera equipment, sound, software. The present call for funds is to enable us to produce the magazine and broadcast media described above.

We estimate at 6500 € the funds needed to carry out our project, and we are seeking external funding of up to € 5000.

This appeal also  gives you an opportunity to contribute to the collective effort by pre-purchasing the magazine and / or receiving photos and acknowledgments.

-       Approximately 130 photographs accompanied by a dozen texts and legends.

I)     Global mouvements against austerity

XI)   From Gezi to Erdogan…

Thanks a lot and an invitation to the exhibition.

An acknowledgment in the magazine, stickers and an invitation to the exhibition.

A 20X30 inkjet print with baryte paper, the printed version of the magazine, an acknowledgment in the magazine, stickers and an invitation to the exhibition.

A 30X45 inkjet print with baryte paper, the printed version of the magazine, an acknowledgment in the magazine, stickers and an invitation to the exhibition.

A large format view camera portrait session in our studio (50x60 Print), a 30X45 inkjet print with baryte paper, the printed version of the magazine, an acknowledgment in the magazine, stickers and an invitation to the exhibition.