Help us to finance this book, for a committed social street art against prejudices, building a bridge between worlds ignoring each other...

Content of the book "The ArtFabric. Street art at the borders of society" (Please, note the texts are in French)

This book is all about a meeting. Or more precisely many meetings...

Initially there is Fabi and Eric. She is brazilian and does social photography; he is french and globe-trotter street art photographer. Their common project : make art accessible to everyone. Because the most vulnerable, wether they live in a street in Los Angeles or under a bridge in Toulouse, in a favela of Rio or in a makeshift camp in Berlin have rarely access to art. So, Eric and Fabi decide to carry original artworks, created on paper by street artist from the entire world, in order to paste those on the walls of those communities which have become invisible in our modern society.

A book of testimonies and images gathering the life stories accross the world with artworks from 69 artists from the five continents. A moving but necessary book with stories of meetings beyond borders, creating new links between worlds ignoring each other.

Around 150 quality pictures taken by two professional photographers accross the world, far from the touristical spots, making visible those who becam invisible.

Éric Maréchal. Street art photographer for a long time. He discovers street art in 1980 in Chicago where he regularly travels, then in Paris with Nemo and Mesnager among others... In 2008, he creates the project "Street Art Without Borders" where he spreads by pasting artworks form worldwide street artists wherever he travels: 450 artists from 39 countries participate to this project.

The ArtFabric. NGO created by Fabi and Eric in 2012 based on a simple statement: art should be accessible to everyone, it is an essential media opening dreams, imagination and awareness. Since its creation, they travel with pots of glue and brushes to offer hundreds of artworks at the four corners of the world: from Brazil where they live to Argentina, from USA to Mexico, from China to Germany and France... Everywhere they reach the same  conclusion: those who have nothing greet them with joy and share a slice of life, they open their "house" which is often just a piece of sidewalk covered with trash.

The artists by countries

We need 3,500 € to do this book which will be part of the "street art" collection at Omniscience. This covers one third of our expenses.

This collection of artbooks is presenting street art with an original approach, exploring the various facets of a popular art. Three books have already been published so far: "Graffiti Baladi - Street Art and Revolution in Egypt" , "Epsylon Point. My Face by my Friends" and "Street Art and Charlie. The Memory of Walls".

In the case where the objective would be surpassed, we will organise a meeting between some artists and kisskissbankers in the publisher office in Montreuil (in the suburbs of Paris) where the rewards will be distributed and the books signed.

- internal expenses for editorial follow up, coordination up to printing and distribution: 2,000 €

The remaining of the budget is used for creation and delivery costs of the rewards:

Like every publication at Omniscience, this book will be printed in France with a limited carbon print. The printer has the Imprim'Vert label: no toxic product, controlled energy usage, etc. 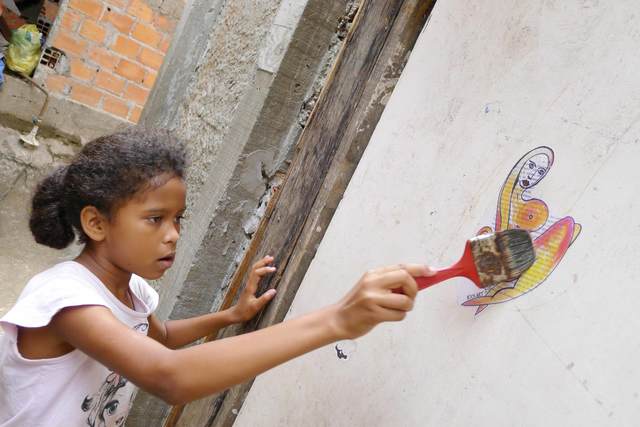 One original stencil inspired from the book, 30 x 40 cm, by NiceArt + one copy of the book "The ArtFabric - Le Street art aux frontières de la société" + a postcard and our thanks at the end of the book.

One original stencil inspired from the book, 60 x 80 cm, by Ebenholz + one copy of the book "The ArtFabric - Le Street art aux frontières de la société" + a postcard and our thanks at the end of the book.