The Charlatans have been robbed!!

Touring band Szkojani Charlatans, currently based in Istanbul has been robbed! We need help to replace our valuable equiptment. 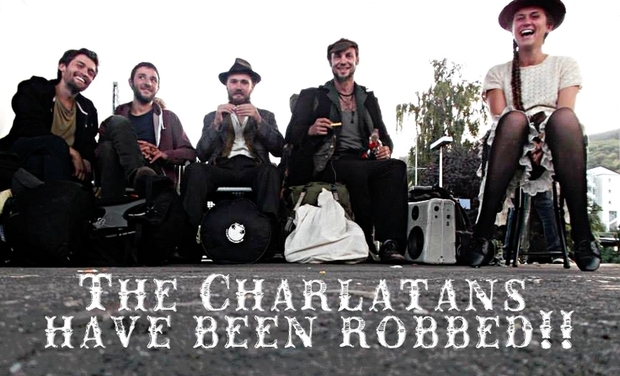 The Charlatans have been robbed!!

The Szkojani Charlatans are a multi-national group of traveling street musicians who have been touring for several years in Europe and North America, playing traditional music learned from the source in Hungary, Romania, Bulgaria, Greece, and Turkey.

Recently we returned to Istanbul from a tour and recording session in Belgium.  On the night of October 25, while we were fast asleep, someone broke into our apartment and stole two clarinets, a laptop computer, a zoom recorder, microphone, ipod, several phones, and two wallets containing a passport, cash, and Turkish residence permit, among other things.  This seriously hinders our ability to continue with our mission, since without this equipment it is impossible not only to play and make money, but to learn new music and travel to planned future gigs.

Right now we have regular gigs in Istanbul until mid-November, and have concrete plans to spend two months on tour in Mexico this winter, followed by a month-long tour in Greece.  These plans appear to be seriously compromised unless we are able to regain some of our recent losses.

By the way, for those that don't now us yet here's our brand new album, recently recorded in Brussels this october:

Well...we are sincerely hoping to see you soon on the way...

Only with the help of our valued fans and supporters can we hope to replace solely the most essential items we need to move forward.

If we were to enumerate the true cost of the missing items, it would look something like this (prices in Euro):

With the €3000 we hope to raise from your generous donations, we will replace:

The importance of these items in our daily lives and careers cannot be overstated.