The Porter Brothers is the French reboot of Spaghetti western! We are making a French-made Western with US and UK actors. 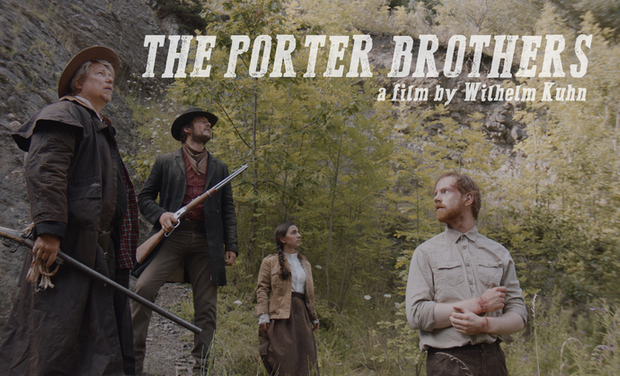 The Porter Brothers is Wilhelm Kuhn's the thesis film for The London Film School. Wilhelm, a big fan of westerns, has always noticed the non presence of western in short-films and especially student short films. The lack of budget could be an explanation but his film is aimed at showing that it's an illegitimate one.

Drawing from a long tradition of European westerns (Sergio Leone, Corbucci for the Italians Karl May, Harald Reinl for the Germans), we had the idea of developing this genre in France, taking advantages of the wonderful landscapes in the region of Auvergne. After the desertic Spanish open spaces that could be seen in Leone's films in the 60s, the American Frontier has been re-created in the volcanic and continental atmosphere of the center of France.

We shot the film in Puy-de-Dôme, in the South of Auvergne. The landscapes that tit offers make up a wonderful place to go to on vacation, but obviously to film a western too!

The film includes 5 main characters, the actors are all native English speakers.

Glenn Conroy aka "The Pastor", being dressed up by costume designer Audrey Manin

Our very talented cinematographer Jackie Teboul is also a graduate student from the London Film School. She shot the film with the new ARRI AMIRA on Angenieux lenses. She has had the hard task of doing justice to the visual glory that was -and still is- the Western.

The work has been particularly difficult for the night scenes for which heavy lighting equipment was used on location.

A very intense emphasis has been put on the reconsitution of the living conditions in the 1870s.

Props, wounds, dirtiness and obviously the costumes have all been carefully worked on.

The crew has aready paid invested more than 15 000 euros from their own pockets. We need an extra 4000 euros to complete the post production. The film needs very accurate sound effects (gunshots, horses, foleys) and mixing as well as plenty if digital special effects/

For instance, we need to digitally erase all anachronisms that we could not remove on the set (airplane traces in the sky, electic poles in the countryside, modern houses in the background). We also need to create the muzzle flashes out of the guns when they shoot as well as the bullet hits in the tree. Some scenes also need matte-paintings to make the landscape wilder and more dangerous.

The money we will receive will be allocated as it follows:

Any extra money we will receive above 4000 euros will be allocated to the distribution of the film and will maximize its chances to be seen in festivals.

All previous prizes + a dedicated copy of the script + your name in the credits as "investors".

All previous prizes + personal invitation to the premiere screening of the film in Paris or London (you choose),as well as a personal chat with the director on skype (if you want...)

All previous prizes + personal meeting with the director + a special tour in the post-production facilities + your opinion on the edit of the film before the final cut! AND a weapon replica that has been used on the shoot!