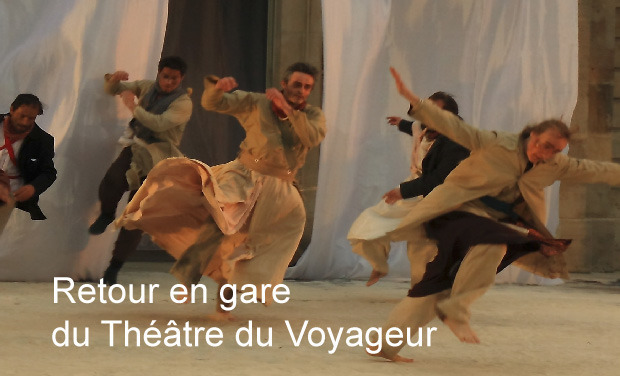 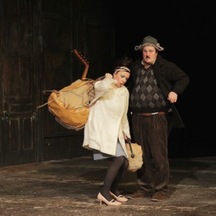 In 2002, the preordained Théâtre du Voyageur arrives at Asnières train station.  Situated just five minutes from the Parisian hub of Saint-Lazare, conveniently served by two major train lines (J and L), the vast space that was once a passenger waiting room is soon occupied by a new kind of traveller, the kind who would waste no time in unpacking their cases and building a theatre.

Over ten years, this building has been brought back to life by its inhabitants and by all those who visit…

5 clips portraying the life of the Voyageur

Narrated by an interview for France Culture in August 2012:

A theatre space is shaped over the years by an accumulation of bits and bobs and rarities. The former waiting room at Asnières train station was once deserted, but now plays host to any number of extra-ordinary landscapes and fantastic interiors. A mere glimpse inside is enough to pique the curiosity of the passing commuter. As creations multiply, so too do audience numbers. Children jump at the chance to practise theatre, dance and music on a weekly basis.

Depsite being otherwise successful, the Voyageur’s existance remains precarious: the lease has always been short-term, in stark contrast to the audience’s lasting interest. At the end of 2011, the news hit the company with all the force of a Greek tragedy’s devastating final act: the building was to be reoccupied by the railway company (SNCF), the theatre was to be replaced by offices. There followed a painful time of final performances, final workshops. The future looked bleak… The company handed over their keys in September 2012.

Since our eviction, the company has been working night and day to regain our space.  Town councillors, as well as regional representatives, have shown their support. We packed our things and stored them here and there, wherever we could.  One month after the keys were handed over, things started looking up.  The SNCF (the railway company) agreed to share the space. And so began the plans for reconstruction.

The space as seen from the dressing rooms (2012)

In order to guarantee our return, we are obliged to meet certain prerequisites: investment for purchase of goods, and a solid architectural plan. Based on these principles, a contract between ourselves and the building’s landlord, Réseau ferré de France, is currently being drawn up. The architectural plans have been prepared by Jean Perrottet (who famously designed the Théâtre de la Ville and the Théâtre de la Colline) and Marianne Baste-Morand (heritage specialist and project manager). The total budget is 360,000euros: modest in comparison to what a similar-sized institution would require to build a theatre.

To date, three-quarters of this budget is secure, thanks to our partners: Conseil Régional d’Île-de-France, Conseil Général des Hauts-de-Seine, Ville d’Asnières, the State.

The remainder of the budget, which must be covered by the Théâtre du Voyageur, represents a real challenge for our company!   We are well on our way to reaching the goal, thanks to the efforts of friends and members of the company, and people within their networks.  We do, however, have a small way to go before our budget is met.

With your help, we can reach our goal. Your generosity is vital to the birth of a new theatre, and the rebirth of its company, in a building that was always intended for voyagers. We will once again be able open our doors to take our audiences on journeys of the imagination, to breathe new life into the theatre and the station.

We hope you will join us on our journey: a myriad of characters are bursting to be released from the trunks they have been packed into. Your contribution to this project will allow them to return home, where we look forward to embarking on new adventures together !

With our thanks and our friendship.

Seating banks will allow for an audience of 85.

Above the foyer will be an upstairs area with dressing rooms (for 15 actors), technical operations room, office and storage space on two floors.

Loyal audience members and potential visitors alike encounter the Théâtre du Voyageur on the path of their daily route thanks to its strategic location at the train station.

« Those who love the theatre will take the train.  The location is so unexpected that there is a kind of magic to the venue.  Inside, the walls of this former passenger waiting room tremble slightly as the trains pass by.  Could Chantal Melior, with her concern for bringing theatre to the “heart of the town” and the “heart of life” have dreamed of a better site? The local audiences can’t stay away and even Parisians frequently make the leap across the ringroad to attend shows. Next season, the Théâtre du Voyageur will be giving their venue a “Globe Theatre” vibe with their Shakespeare season. Until then, workshops are run four times a week for those aspiring to tread the boards… Meet you at Asnières train station, platform B!» Matthieu Pelloli – LE PARISIEN (2011)

Two devised pieces will be performed alternately in the spring at the “Cartoucherie”.

« In Les Nomades, Chantal Melior takes [Nietzshe’s] Gay Science and cult travelogue Arabian Sands and adds to the mix a musical theatre flavour. The resulting creation, surprisingly, works well. Where does the journey take us?  Following in the footsteps of Lawrence of Arabia, Chantal Melior presents the desert’s colours, the trials of life and also – Nietzsche’s influence – a gay acceptance of the world we live in. More than just a successful show, a breath of life.”

« What makes a person truly beautiful? What does this ideal mean to us today? Such are the questions raised onstage by the Theatre du Voyageur. This politically incorrect tragic farce goes beyond Good and Evil to depict the beauty of the outsider and the incomprehension felt towards those who choose to remain on the fringes of society.”