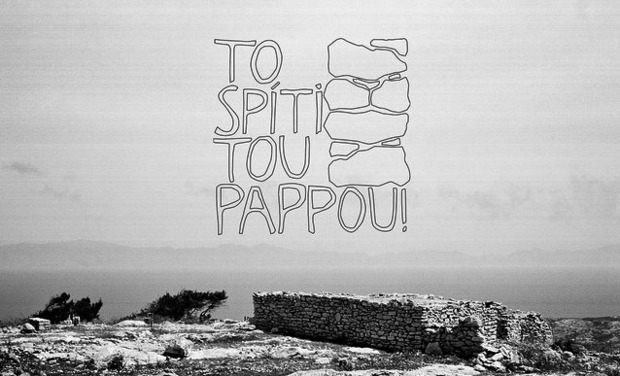 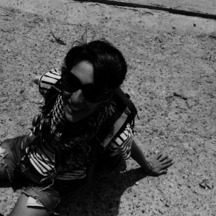 In April 2014, 33 people from 6 different countries gathered in the small village of Ambelos, on Gavdos Island. A workshop about restoring a shepherd house with traditional techniques and natural building materials have been organised by the owner of the house, the Cretan ceramist Gelly Kallinikou.

At the end of the path, between daisies and clouds, a stoned-silhouette is showing up. Here it is, Pappou’s house. We know it will be filled with energy soon. The energy we will give to give it life again, after an eighty-year sleep. But for now, it keeps quiet, and it suits it well. Its discretion is the first lesson, and you have to stop by a second to understand it. It is only aimed to be part of the landscape. Nothing else. Its silent humility is becoming a scream toward men who forgot. Gelly Kallinikou heard it. Softly, thanks to the lessons from her grandfather, she will repeat the gestures that will put this place back into the present. We came to help her and learn.

We were thirty-three and spoke six languages. We shared our cultures and skills as ceramists, architects, engineers, chefs, photographers, drawers, musicians and nurses, in order to transform the earth, the straw, the sand, the water and the cane, into building materials. Gestures did not get old but minds had forgotten. Fortunately, hands have good memories and learn fast. In ten days, the main room has seen the colourful chimney, floor and walls rising again. It is not like before; it is something between past and future. Pappou’s house is not a sample, it is a manifest, a transmission.

The collaboration which happened during the event has given everyone a meaningful lesson that goes beyond architecture: it reminds you the importance of handing over the traditional know-how to the present generations, to broach the future with the most ethical and fair way, integrating human and green values to our actions. Today, we would like to relay our knowledge to a great amount of people, through an interactive exhibition of the 10 days-workshop.

The exhibition will show the different techniques to restore the old house, through texts and photographs. We would like to bring a participative touch to the exhibition, organising a 2-day experimental workshop for visitors, where they will be able to learn and practise traditional building techniques, with Greek and French Architects.

The city of Chania is is a very touristic place, politically linked to the island of Gavdos.Local people and foreigners will hopefully come and mix!

Together with the Piliko architects collective, we will build 7 wooden frames filled with reed fibres and earth (wattle&daub technique), in order to put texts and photos on.

An extra one will not be filled with earth, as the technique will be taught to visitors during short workshops, so they can participate actively.

I have been an Architect for 4 years, focusing on natural materials, and especially on earth, for a year. In October 2013, I went for the first time in Gavdos, to work with Gelly Kallinikou, the owner of the house in Ambelos. Together with the meaningful help of the Piliko collective, we organised the TO SPITI TOU PAPPOU workshop: http://tospititoupappou-gavdos.tumblr.com/ last April.

For the exhibition of this summer, I will be surrounded by the same people

We need a spacious place and an outside place to realise the wattle&daub workshop.

Your help will allow us to print 57 photographs on quality paper, and frame them.

We need to build panels made of wood, reed, straw and metal, to hang the photos and texts.