LAST DAYS to help finance an indie documentary on an endangered Indonesian art: the Wayang Kulit. It's now, or (really) never ! 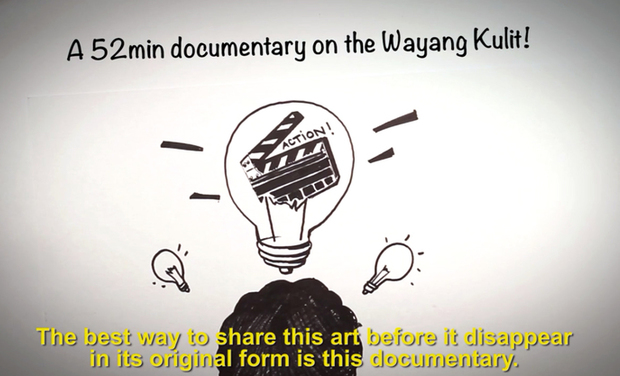 During my internship with dalang Margi in November 2013, I realized that Wayang Kulit was not only a form of entertainment but an incredible artistic medium on which ethical values and spirituality ride. Armed with a simple camera I took the footage that you just saw; now I wish to return to Java with a team of professionals to shoot a 52 minute documentary.

The documentary will capture how religion and spirituality have been transmitted through the art of puppets, the stories of the people that bring the puppets to life and the particular flavor each region adapt this tradition. This page is supporting our quest for financing.

There is numerous forms of Wayang in Indonesia, the art of shadow puppets. Wayang Kulit is one of these forms. Certainly the most well known in Indonesia and around the world, the most representative of traditional Indonesian art, and the most poetic.

Wayang Kulit is unique due to the fact that its shows last eight hours. Eight hours over which the puppets tell the stories of Ramayana and of Mahabharata (the Indian Mythology), sing, play music with their feet, and lead an orchestra of thirty people, all while manipulating puppets made of cow or buffalo hyde.

How did this art become a vessel of communication; transmitting Hindu and Islamic religions on the island of Java? How did this art become the important rituel that is and so much more than simple entertainment? Who are the actors that bring this art to life? What is the creation process of the puppets? How will future generations manage to conserve this tradition in our modern society?

These are the questions this project will strive to answer through the portrait of dalang Margi, an extremely influential and popular puppeteer in the Javanese village Kowen II.

While on my most recent trip to Java, dalang Margi honored me by sharing some of his vast knowledge on this rich subject. By his side I discovered the values and philosophy behind the Wayang, an art that deals with human nature, the meaning of life and of spirituality. An art which in Indonesia is regarded as a dialect symbolic of the world.

With dalang Margi, we will explore the symbolic vocabulary of Wayang Kulit and venture to meet its local actors; his son Toutoun, craftsmen of the puppets, a young student named Elisha, the only woman in the University program of Jogkarta who dreams of becoming a dalang, and the teacher Kasidi, who has been struggling to preserve this ancient practice for years.

Karine is the heart of the project. Passionate about theatre and street performers since her childhood, it wasn’t until 2013 before she tried her hand at puppets by creating a performance inspired by Wayang Kulit in Montreal, where she has been living for the past several years. Parallel to her artistic endeavors she has been working for 3 years as Project Manager for all the video shoots in the metro with the STM (Société de Transports de Montréal). She worked on the sets of Smurfs 2, X-men 2, the Montreal documentary series Bouche à Bouche, and the stunt shoot for the singer Stromae, as well as the debut performances of Antoine Graton and Mister Valaire. After much research and an ever growing fascination for this art form, she decided to embark upon an adventure that had been calling her for a long time; travel to Indonesia to learn how to make traditional shadow puppets and see a performance first hand. In Jogjakarta she is taken in by Mr. Margi’s family, the renowned puppeteer, and is literally blown away by the magic and mystery that is manifested through these shows. Suddenly everything becomes crystal clear as her ideas fall into alignment: she will produce a documentary on Wayang Kulit..

Thierry Denis is a director and producer, and the manager of the production company Helium Films USA, based in San Diego. Helium Films USA produces all sorts of audio visual projects for the internet and television. Thierry Denis has 10 years of professional experience in the film and video world and is passionate about documentaries. He has directed and produced documentaries on a wide array of subjects: social concerns (Les Murs de la Honte, 2009), on science (the series Future Tense, aired in 2013 on WealthTV), cultural (Portraits of artists for the show Art Pulse, aired on NBC in 2013-2014, and a documentary on the world cup: All Eyes on Brazil, (shown in l’Equipe 21)

Sebastien has been working as a director of photography for the past 10 years and is based in Paris. His repertoire of documentary projects includes: “Sur les volcans du monde”, aired on ARTE, “Collision” aired on Planète No Limit. He also works for different television stations (Canal+, M6, Gulli_ as well as institutional projects financed by international clients.) More recently he was involved in his first full length film, called “Brooklyn”, which was selected by ACID at the Cannes film festival.

Our international team comprised of members from Montreal, Paris and San Diego will first need to meet in Indonesia, which will require 3 plane tickets. Upon arrival, we will need to find accommodations, means of transportation as well as a local guide. Indonesia is the second biggest language reservoir in the world, despite the fact that our team is multilingual, we will still need a translator.

We are full of energy and this documentary will show the fruits of our efforts, but budgetary constraints mean we need to seek financial assistance. Which is why we are asking for your generous contribution to help us cover the costs of production and supplies.

What will the money be used for :

WHAT IS KISS KISS BANK BANK?

Kiss Kiss bank bank is a new way to fund creative projects. Thanks to this platform, creators can keep 100% of their projects’ rights. On this project, the goal is to reach a minimum of 7,500 euros ($9,333). This sum is a goal that we NEED to reach. If we do not reach this amount, the money you contributed won’t be debited from your card. International credit and debit cards are accepted. Of course, all the additional funds, once the initial goal is reached, will be used exclusively for the funding of our documentary.