MAKING A FILM about a adventure and caving exploration in the heart of Papua rain forest. 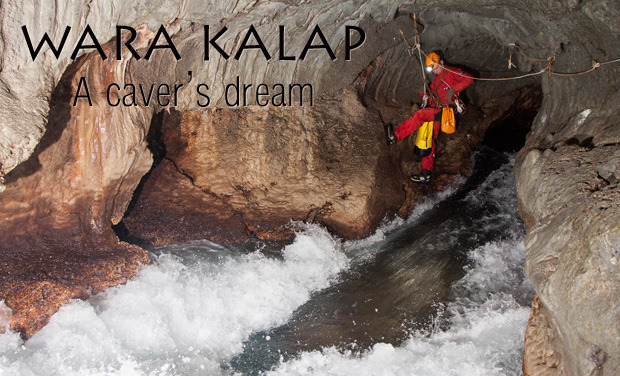 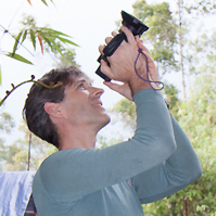 After two long years of preparation, a Franco-Swiss team of 15 cavers left early this year for  2 months of a great Adventure in PAPUA NEW GUINEA rain forest.  A complete immersion in Papuan territory, the discovery of an unknown mountain in the heart of the limestone mountains of Nakanai.    The main goal of our trip and our only certainty before departure there was a huge resurgence in an idyllic location by the sea: WARA KALAP.  5 m3/sec spewed by the mountain, a dream for any caver in the world ...

Flo looking to Wara Kalap, the place were water spray out of the mountain

We were the first explorers in this area and all was to be discovered. A timeless journey into a fascinating world!  The hot and humid forest is teeming with insects of all kinds, living conditions and progression have been very difficult, all team members were injured and / or sick !    The expedition was also an excuse to meet with Papous and their lifestyle halfway between tradition and modernity is happening to their doors. The opportunity to discuss the future of their lifestyle and their environment, one of the last rain forest in the world, fragile and highly threatened ....

After 3 weeks with nearly no results, everything was packed last week:  2 large sinkholes were discovered, 500 m depth in the first one, 600 m in the other.  A major discoveries, hard to reach places, sometimes beautiful and the first steps in a large underground river. But is the collector even accessible ...

A beautifull galerie in Philip Pato cave at 500 m deep

These results are a real reward well deserved given the efforts of the team and the difficulties encountered.

The film directed by Mathieu Rivoire - The ILLUSTROSCOPE - recounts this adventure and will bring you into uncharted territory to explore the magical depths of Nakanai mountains !

If everything go right, the movie will be finish at the end of October and released at the Mountain Film festival in Grenoble.

One of the amazing landscape we discovered during the expedition

Cedric is wellknow for his climbing performances in competition and also is hard routes. He also like to fight with hard conditions in sport caves.

Our friends from Papua, their help was really usefull for our project

Your donations will be used to complete the installation costs, production and creating original music.

Part of the budget of the film is covered by FODACIM, a special found for Mountain Film.

The amount annonced is a MINIMUM witch have to be reach to validate the action of crowdfunding, this minimum will be used to pay for the work of the director.

If your generosity is large and exceeds the initial amount, we can then also partially fund the work of cameramen filming costs during the expedition.

A big THANK YOU to all cases for your help.

You don't have too much financial possibilities but you still want to help the project. A NICE SCREEN SAVER for you and your name in contributors page on our website. A big THANK YOU for your support ! Every underground drops make a river ...

A PACK OF 5 POSTCARDS. Format: 10 x 15 cm matt lamination finitions and your name in contributors page on our website. THANKS for your help, Drops will form a trickle ...

THE MOVIE for you! After the premiere in Grenoble, you will receive a LINK TO DOWNLOAD the film and your name in contributors page on our website. THANKS, drops are more numerous...

GET THE DVD of our adventure: WARA KALAP, A caver's dream For you or to offer! think about christmas gifts ;-) and your name in contributors page on our website. Thank you, we'll soon arrive to the brook

Get a pack with THE DVD of the film + 1 POSTER + YOUR NAME in the credits of the film and your name in contributors page on our website. Great, no ?

A caving trip with Phil Bence, professional caver, member of Petzl team. An trip according to your wishes : - A quiet beautiful concretions found in a cavity - A sportier trip in a deep mountain cave. Anyway, it will be a great adventure ! and your name in contributors page on our website.

A nice caving trip with Cédric Lachat, professional caver, member of Petzl team. A BIVOUAC the Sassenage cave*. One night underground, a total immersion in another world. An unforgettable adventure! * All caving and camping equipment provided, accessible initiation, maximum 3 persons in the trip, meals not included. and your name in contributors page on our website.