Support the first French edition of the monument of the counter-culture created by Robert Crumb and Gilbert Shelton.

In 1968, an unknown young artist named Robert Crumb self-edited the first issue of Zap Comix, which he himself sold with his wife in a baby carriage on the sidewalks of San Francisco. From the following issues, he was joined by S. Clay Wilson, Victor Moscoso, Rick Griffin, Robert Williams, Spain Rodriguez, Gilbert Shelton ... History was on the move. The Underground movement took off and Zap Comix was going to serve as its model. All the author's comics, until today, finds its point of origin in Zap, its incredible freedom of tone, its complete disregard of conventions, and the demonstration that the comic is such a fertile mode of expression as literature or as art. Here is for the first time in French the complete Zap Comix, a first volume which brings together the first 9 numbers, plus the number 0. Support the publication of this counter-culture monument, and exclusively for this campaign, reserve your copy in hardcover, limited to 200 copies, numbered and with an ex-libris signed by Robert Crumb and Gilbert Shelton!

In 1968, Robert Crumb recently moved to San Francisco, attracted by the hippie movement of which the city is the epicenter. He has been drawing for several years, without yet managing to make a living from it. He decided to launch his first publication, Zap Comix, in February 1968, which sold well, and one comic page of which in particular, Keep on truckin ', became famous across the country.

In june 1968, Zap Comix n ° 2 appeared. Crumb is joined by the demonic S. Clay Wilson, the surrealist Victor Moscoso, the mystic Rick Griffin, the satirist Gilbert Shelton, the dandy Robert Williams, the champion of the proletariat Spain Rodriguez. If Zap Comix is not the first independent magazine to bring together several cartoonists, it is the first success from the Underground scene. Crumb, Shelton and their comrades became comic rockstars. Their careers are launched, but they find themselves for new issues of Zap Comix over the years, without being subject to any regularity in the publications. For five decades, each of the authors will deploy their personal universe, while commenting on their time, with stunning freedom, until the last issue which appears in 2016. Humor, sex, art, social satire ... After half a century, this literary shell kept all its explosive power.

Editions Stara, specialized since 2008 in the edition of American underground comics (which we call in English as "comix") present the first volume of the complete Zap Comix, so far unpublished in French language. 472 pages meticulously restored, translated and re-lettered, enriched with interviews with the historic team of Zap, photographs and reproductions of the covers of the first nine issues, also including n ° 0, ranging from creation in 1968 to number 9 in 1978. The complete Zap Comix Vol 1 will include 520 pages in total, in 19,1x25.5 format, with a paperback cover taking up the cover of number 0.

Exclusively for this Kisskissbankbank campaign, we have imagined a limited and numbered head print of 200 copies with a hardcover. Robert Crumb and Gilbert Shelton are happy to sign each an ex-libris included with this limited edition.

We need you ! For the independent publisher Editions Stara, achieving such an edition is a huge challenge, which will be the culmination of years of work. In 2016, we already published in French Zap Comix n ° 16, the very last issue published in the United States in 2016. But it was in 2013 that we started to prepare this complete, in collaboration with the American publisher Fantagraphics Books.

After having published jewels of the comic book Underground (Binky Brown meets the Holy Virgin Mary of Justin Green, The New Adventures of Jesus by Franck Stack) and the two anthologies Anarchy Comics and Comix Book , the publication of Zap Comix is a real dream for those who are passionate about author comics and counterculture that we are. Zap is the American source of a great creative movement that has turned comics into the ninth art. A generation of artists have expressed themselves without any constraint for almost fifty years. Inexplicably, Zap Comix had never been translated into French. And this while Robert Crumb and Gilbert Shelton, who have both lived in France for years, are enormously appreciated!

The Complete Zap Comix Vol 1 will be released in bookstores in september 2020. Kisskissbankbank subscribers will receive their copy before the release in July 2020, or may come and pick it up at the launch event which will take place in Paris at Thé Troc, boutique well known to fans of independent comics, in the presence of Gilbert Shelton.

During this campaign, you can also order Zap Comix n ° 16, as well as the titles previously published by Editions Stara, including those which are completely sold out in the trade like Battle Pape (the French edition of Battle Pope) by Robert Kirkman and Tony Moore, the creators of Walking Dead, and Comix Book, the anthology of the Underground comics that were published by Marvel between 1974 and 1976. You can also check the 200 original US underground comics from the personal collection of Stara’s founder. And you can choose the range for the number of your limited hardcover edition.

The campaign will fund :

If the initial Campaign goal is not reached, the hardcover limited edition of The Complete Zap Comix Vol 1 will not be released.

STRETCH GOAL COMPLETE ! If we reach the 150% stretch goal, we'll be happy to include for every backer a 40x60 poster of the Complete Zap Comix Vol 1, with the artwork form Zap Comix n°0

STRETCH GOAL COMPLETE ! If we get up to 200% of the inital goal, each backer will get a set of 10 postcards reproducing the Zap Comix covers from n°0 to n°9.

STRETCH GOAL COMPLETE !If we reach 250%, we'll give a poster reproducing the Zap Comix n°3 cover, designed by Rick Griffin.

At 300%, all backers will get a fourth poster with the cover of Zap Comix n°4 by Victor Moscoso. 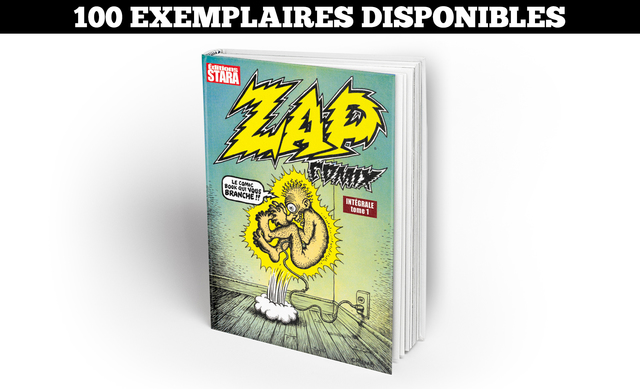 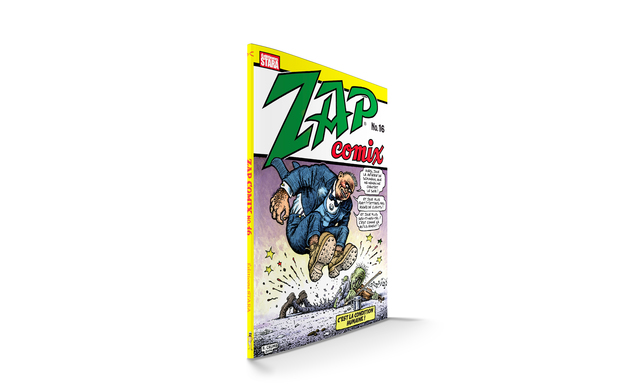 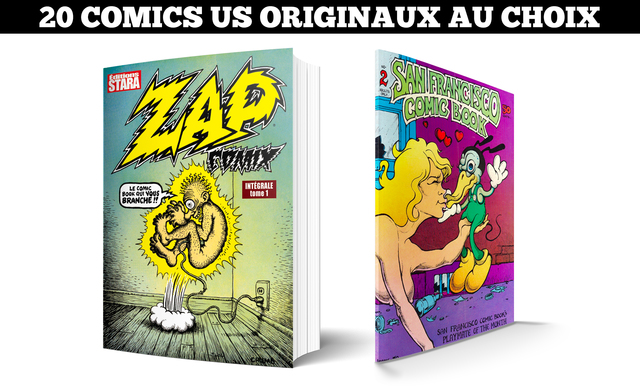 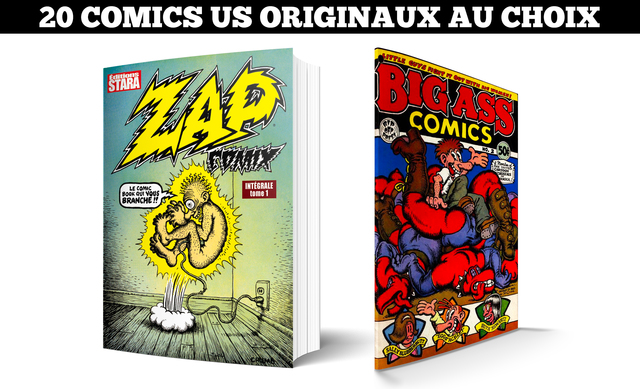 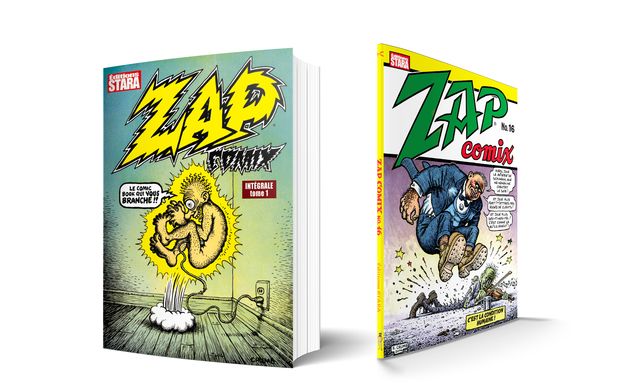 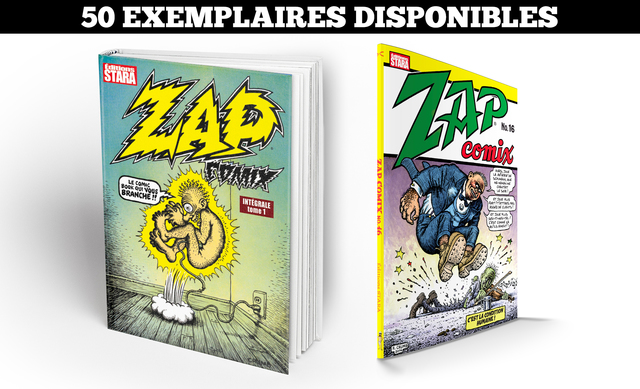 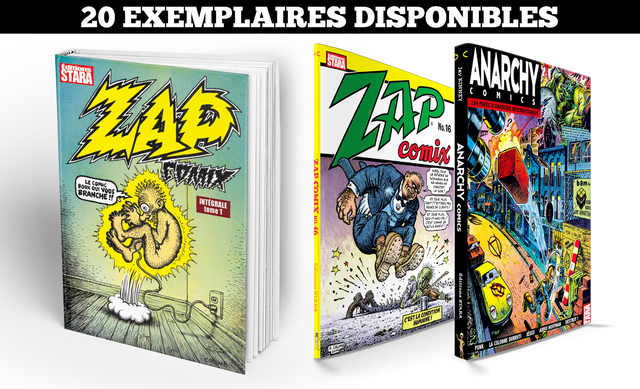 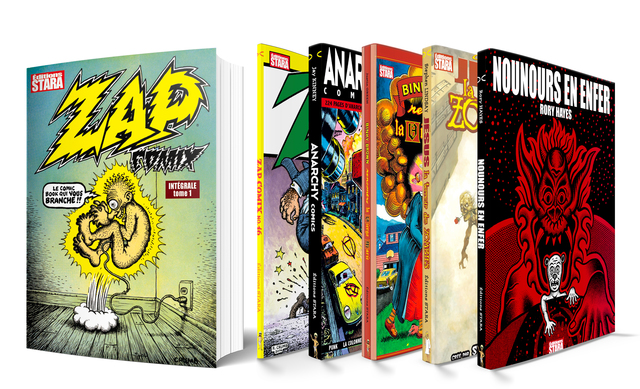 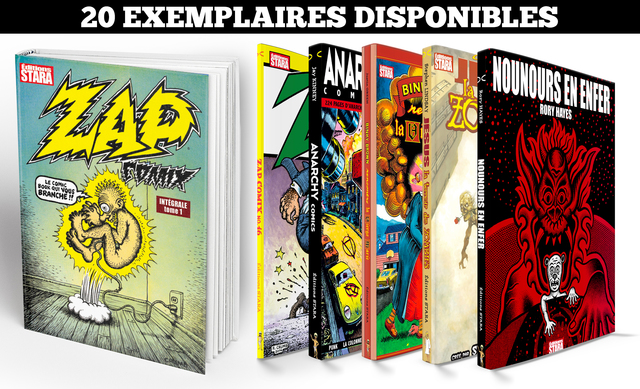 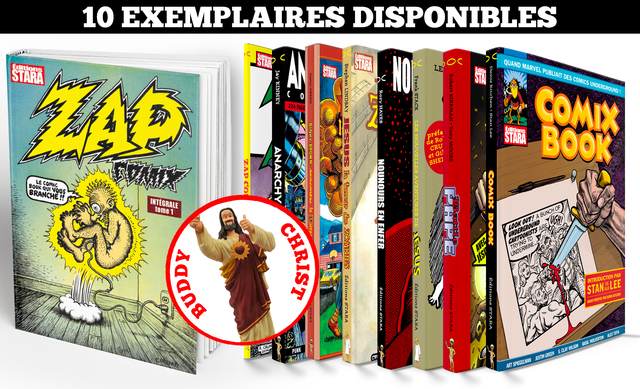