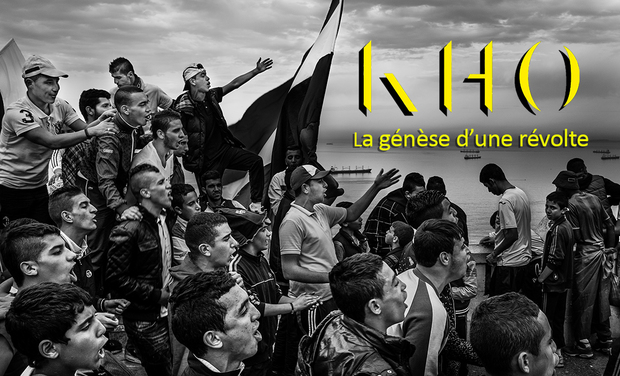 Kho, The Genesis of a Revolt

Kho is an immersion in the heart of Algiers' working-class neighborhoods, meeting a youth who one day in February 2019 broke the wall of fear by walking into the streets, and giving life to the biggest demonstrations that Algeria has known for decades.

But the story begins in 2014. Bouteflika had just been elected a fourth time president of Algeria, a country with a very heavy past and finally very little documented since the "black decade" (the civil war of the 90s).

When I discovered Algiers the first time, I was caught up in the general slump that seemed to follow us everywhere. At each street corner, an immense youth which seemed to wander aimlessly, in the void... The regime expected nothing from it but calm, resignation.

I had to tell about these young people who interested no one.

So I followed their wanderings. I photographed daily life in its simplicity. Suspended moments that only underline a singular and worrying situation. The boredom and frustration of the street. The claiming rage of the stadiums... Moments of ephemeral freedom in discreet places, hidden from society...

I lived like this with them for more than 5 years, as if inhabited by this story which for me was more than just a documentary.

It was played out in these neighborhoods, something fundamental and universal that had to do with human tragedy.

Man in the face of the dogmas that erode him?

How does he live when he is deprived of dreams?

Kho, has received international recognition through numerous awards and exhibitions. It won the story of the year award of the prestigious WorldPressPhoto 2020, and an exhibition has been traveling around the world for the past year.

This book will be for me the most complete and successful form of restitution. The one that will be perennial in time.

"The photographer tries to tell the story of the young people not only now but over several years. He tries to be close to the neighborhood, to the people, to their way of life (...). For me, this story is really powerful because you feel that you are there. The photographer has made you feel that you are in the country". - Mariana Bazo, Peru, photojournalist, and member of the general jury of WorlPressPhoto 2020.

I thought this book to reflect my photographic approach. I would like the reader to take part in the story. Living in Algeria, in the heart of these neighborhoods, while giving him the space he needs for his own reflection.

By the choices of the scenography, the model, the paper, or even the cover, I hope to be able to take the reader into much more than a documentary report.

So I see this book as a journey. It will nevertheless end with a long text in which I will tell my own story. I will evoke my encounters, my most striking anecdotes, my experiences...

Followed by a list where each photograph in the book will be annotated or captioned.

This book can therefore be understood as a thousand sheets, at multiple levels of reading.

I am currently working on its finality. I will inform you very regularly on the progress and final choices of the book.

The characteristics of the book are as follows:

200 color and black and white pages

Texts in French and English

The book will be shipped to pre-buyers by early April 2021 at the latest, and then marketed in May in bookstores.

By pre-purchasing a copy of this book, you simply allow it to exist! You thus fully participate in a cultural creation, and support book publishing independently, outside of traditional commercial schemes. Thank you!

Questions? Proposals? Don't hesitate to write us an email : rlaurendeau@gmail.com

We are not collecting donations here. This is a pre-sale campaign.

This means that the public is simply offered the opportunity to buy the book, before it is released. This money allows us to reduce the amount to invest in the book's publishing and to limit the need for a bank loan (budgets are very important, the printing of the book alone is around 13.000 euros).

You thus participate in the creation of the book, by supporting a completely independent edition, as close as possible to the photographer's vision. In return, you benefit from a preferential price, and unique compensations.

In complete independence. This is the price to pay for the freedom of artistic choices.

After a photography training, Romain has contracted a Keratoconus, a disease which gradually distorted his corneas. During these years of illness, he explored intimacy, through introspective series fed by his doubts. In 2009, a corneal transplant saved his sight. It's a new birth. Since then, he has travelled extensively to document the human condition in all its social, economic and political aspects.

In a perpetual questioning on the human being and the world, he naturally develops an immersion approach by sharing his subjects daily life for months. First in Senegal, but especially in Algeria, he is directly confronted with the suffering of a population subjected to issues that go far beyond its control. In his quest for universality, absurdity and the consequences of dogmas became his favourite subjects. For more than 5 years, he followed the working class districts Youth in Algiers, telling the story of boredom, frustration and lack of dreams of these young people who consider themselves as a lost generation. A work which finally documents the underlying reasons for the revolt that Algeria is facing today.

2020 Winner of the World Press Photo story of the year

2018 Exhibition of "derby" at the manifesto festival (Toulouse)

2017 Winner of the Pierre and Alexandra Boulat Award

Winner of the Prix Roger Pic

Exhibition at the Festival œil Urbain (France) for the "Derby" series

Exhibition at the SCAM (Paris) for "Derby".

2016 Exhibition of "Bab el Oued" at the MAP festival (Toulouse)

Screening of " Derby " at the Visa pour l'image festival (Perpignan)

Exhibition of "Bab el Oued" at the festival barrobejectif (France)

2015 Winner of the Camille Lepage Award

2014 Winner of the Zoom of festival Saguenay Award

Thank you very much !

The book "Kho, the genesis of a revolt". Free shipping costs (in europe) Dedicated book