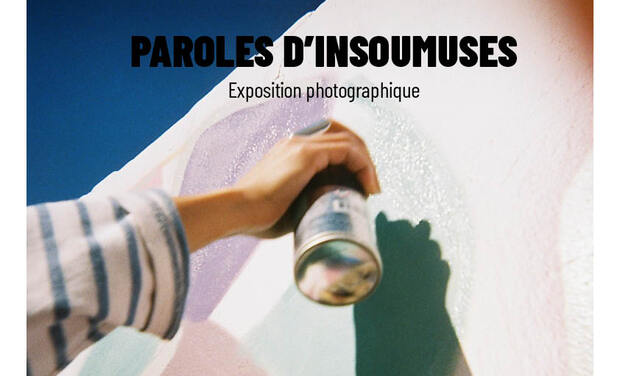 "Paroles d'Insoumuses" is a photographic report that documents in a sensitive and artistic way the 𝐟𝐞𝐦𝐢𝐧𝐢𝐬𝐭 𝐞𝐧𝐠𝐚𝐠𝐞𝐦𝐞𝐧𝐭 𝐨𝐟 𝐭𝐮𝐧𝐢𝐬𝐢𝐚𝐧 𝐮𝐫𝐛𝐚𝐧 𝐚𝐫𝐭𝐢𝐬𝐭𝐬. From rap to graffiti to slam, this exhibition gives voice to emerging and talented artists who resist and create, each in their own way.

This photographic exhibition is the result of field work carried out in Tunis and Sfax as part of my dissertation in Political Sciences. I tried to keep traces of the encounters in visual and sound form.

On the occasion of the tenth anniversary of the popular uprisings of the Arab countries, known as "Arab Springs", which emerged from the interior regions of Tunisia; the exhibition offers 𝙖 𝙛𝙧𝙚𝙨𝙝 𝙖𝙣𝙙 𝙣𝙚𝙬 𝙛𝙤𝙘𝙪𝙨 on the Maghreb. Indeed, this plural subject addresses issues related to youth and women through the singular prism of artistic creation.

Furthermore, photography is an accessible medium that can be used as a support for discussion and the organisation of events on this theme (conferences, films, meetings, concerts). The documentary Les fleurs du bitume could also be shown in parallel with the exhibition. Thus, depending on the space available and the partnerships forged, the exhibition could take 𝐬𝐞𝐯𝐞𝐫𝐚𝐥 𝐟𝐨𝐫𝐦𝐬, 𝐚𝐝𝐝𝐫𝐞𝐬𝐬 𝐝𝐢𝐟𝐟𝐞𝐫𝐞𝐧𝐭 𝐚𝐮𝐝𝐢𝐞𝐧𝐜𝐞𝐬 𝐚𝐧𝐝 𝐜𝐫𝐞𝐚𝐭𝐞 𝐞𝐧𝐫𝐢𝐜𝐡𝐢𝐧𝐠 𝐝𝐞𝐛𝐚𝐭𝐞𝐬.

Written and directed by Karine Morales and Caroline Péricard

In the streets of Tunis and Sfax, Chaima dances, Ouméma graffiti, Shams slame.they do not know each other but are part of the same generation. They were born under the dictatorship of Ben Ali. They are the teenagers of the Jasmine revolution that hatched in Tunisia in 2011, they embody all the nuances, sometimes opposed, always complementary, of a common struggle: women's freedom in their country. A peaceful struggle that they lead in the streets, a space largely occupied by men in Tunisia, and that they have chosen to regain through the practice of Street Art, a struggle that makes their daily life oscillate between fear, hope, violence, creative energy and thirst for freedom.

This work is part of the permanent collection of the MUCEM, Screening at the Mucem in May 2019

"Where the word does not yet emerge, it is our poetry that helps us to shape it. Poetry is not just dreams and visions, it is the backbone of our lives. It lays the foundations for future change, it bridges our fear of what has not yet happened. " Audre Lorde

My name is Anouk and I am 24 years old. I studied History and Political Science in Nantes and then in Brussels. During my university studies, I was particularly sensitive to issues related to youth, popular movements and women's rights.

During my studies, I specialised in the Mediterranean region. These interests were reinforced when I wrote my thesis on feminism and urban arts under the supervision of the Université Libre de Bruxelles. This research was based on fieldwork carried out in Tunisia in partnership with the Institute for Research on Contemporary Maghreb. Beyond the academic dimension, I documented this subject through silver photographs and audio recordings, which I now wish to promote.

I am currently working in civic service at Géopolis, a photojournalism centre in Brussels. My mission is centred on the programming of the European radio station Euradio, attached to this exhibition space. On a professional level, I am involved in projects that combine the political and artistic dimensions. I am attracted by the cultural, journalistic and documentary sectors. Dynamic, curious and observant, I am driven by the desire to meet and understand others. 𝐌𝐲 𝐝𝐞𝐬𝐢𝐫𝐞 𝐢𝐬 𝐭𝐨 𝐭𝐫𝐚𝐧𝐬𝐜𝐫𝐢𝐛𝐞 𝐭𝐡𝐞 𝐫𝐞𝐚𝐥𝐢𝐭𝐢𝐞𝐬 𝐭𝐡𝐚𝐭 𝐬𝐮𝐫𝐫𝐨𝐮𝐧𝐝 𝐦𝐞, 𝐡𝐞𝐫𝐞 𝐚𝐧𝐝 𝐞𝐥𝐬𝐞𝐰𝐡𝐞𝐫𝐞.

This project emerged as a result of a 𝘴𝘵𝘢𝘺 𝘪𝘯 𝘛𝘶𝘯𝘪𝘴. I went on a European voluntary service for a year of break between the bachelor's and master's degrees. On the spot, I took a photo report on the illegal immigration of young people to the European coasts.

In parallel to this work, I met 𝘴𝘦𝘷𝘦𝘳𝘢𝘭 𝘩𝘪𝘱𝘩𝘰𝘱-𝘤𝘰𝘭𝘭𝘦𝘤𝘵𝘪𝘧𝘴 with whom I spent time during their creative moments. I rubbed shoulders with rappers, graffiti artists, dancers and photographers. I followed their daily lives, discovered the difficulties that artists in this milieu face and exchanged with them on these issues. It was a 𝘷𝘦𝘳𝘺 𝘮𝘢𝘴𝘤𝘶𝘭𝘪𝘯𝘦 𝘶𝘯𝘪𝘷𝘦𝘳𝘴𝘦, centred around the notion of crew, yet benevolent towards me.

Back in Nantes, I volunteered at the Hip Opsession festival during which an evening dedicated to hip-hop culture in Tunisia was organised. I attended the screening of the documentary 𝐋𝐞𝐬 𝐟𝐥𝐞𝐮𝐫𝐬 𝐝𝐮 𝐛𝐢𝐭𝐮𝐦𝐞, directed by Caroline Péricard and Karine Morales, a portrait of three young Tunisian urban artists. This film challenged me and was the starting point for a reflection on 𝐰𝐨𝐦𝐞𝐧𝐬' 𝐩𝐥𝐚𝐜𝐞(𝐬) 𝐢𝐧 𝐭𝐡𝐢𝐬 𝐚𝐫𝐭𝐢𝐬𝐭𝐢𝐜 𝐬𝐩𝐡𝐞𝐫𝐞.

I decided to deepen this questioning by choosing this subject for my master’s thesis in Political Science at the Université Libre de Bruxelles. I then became interested in the feminist commitment of fourteen urban artists (rap, slam, graffiti), which represents half of the female hip-hop scene in Tunisia. Since my research is based on fieldwork, this project led me to go back several times.

∙ Focus on the Maghreb through an original prism

∙ Visibility of the female and Tunisian hip-hop scene

∙ Crossing views on both sides of the Mediterranean

∙ Valuing fieldwork carried out over a long period of time

∙ Highlighting a project by a young journalist

In Nantes (January), Brussels (February) and possibly in Tunis and Paris.

The names of the places will be announced later.

In these uncertain times that the cultural and artistic sector is going through, it is not easy to take the plunge, but I believe deeply in this project in which I have been involved for more than two years. ᴡɪᴛʜᴏᴜᴛ ʏᴏᴜ, ᴛʜɪs ᴇxᴘᴏsɪᴛɪᴏɴ ᴄᴀɴ ɴᴏᴛ ʀᴇᴀʟɪᴢᴇ ɪᴛsᴇʟғ !

That is why your participation, even the smallest one, is very precious!

In exchange, you will be entitled to my immense gratitude. But not only that!