Music is my contribution for you "Jah Prince" 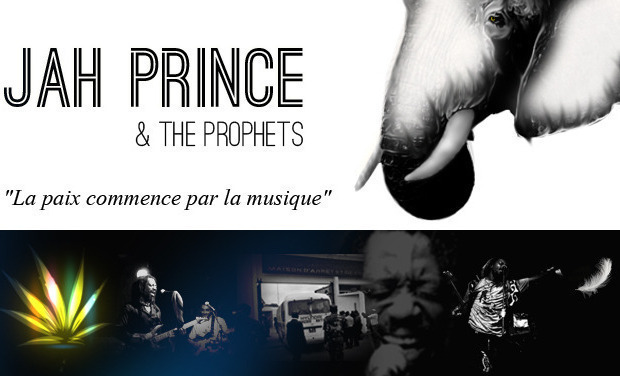 The organizers of the project

We’re Lucille and Maëlly, members of the association JAHPS. Our project is making a music video clip of the song "Prisoners of Babylon" by a complete artist (author, composer, interpreter and musician): Jah Prince as well as a tour for 2014.

After "Prisoners of Babylon": a second album

"Prisoners of Babylon " is the title of the album self -produced by Jah Prince and released in 2003. This album praised by the press for its maturity is still topical. It announced the difficult transition of the artist from the prison cell (November 2012 - October 2013), as we see on the album cover.

If our project is appreciated by the public, Jah Prince could rebound from this difficult experience (in addition to his arrest, the artist was dispossessed of his music equipment and production of CD in Ivory Coast, West Africa) and continue doing what he loves the most: Music. We count on you to make this project become reality!

Jah Prince has plenty of new sounds in his head. After eleven months of imprisonment under the most difficult conditions, what tone will he give in this new album? We trust on you to be able to realize this project.

Jah Prince: 30 years in the music

Jah Prince is one of the pioneers of the african reggae scene making. He started his career at 1977 when the reggae was spreading over France. Jah Prince chose the reggae to send « a message for the peace among the nations ». He writes his lyrics for the purpose that finally « Africa gets rid of his chains and stops all sorts of oppressions ».

21 years old, he quitted his civil engineering study for music and did a return trip: back to Zion! 1985, his long dreadlocks upset the former Ivorian President Félix Houphouët-Boigny. At that time, Bob Marley was not allowed to come to Côte d’ivoire during his african tour. Jah Prince was arrested and detained prison and Correction of Abidjan (MACA). He was released a month later but without his rebellious locks! This episode inspired the song "Prisoners of Babylon" which is a dedication to all men wrongly imprisoned.

Concerts in Côte d'Ivoire and in Europe

He is reputed at the concerts like Tambo 93, the Rocking Marlboro of Korhogo, with Tiken Jah at the first part, and played on the stage of the rock festival of Cocody where he triumphed with the group “Ying ô yang” on 95.

He participated also as leading star at the ceremony of Bob at Treichville of ITACI. 1998, he launched the production of his first album " First Mystic Revelation in the Roots " at Côte d'Ivoire then at the studio Kos & Co in Paris.

August, 2003 after 5 years work, he brings us a new message of love and continue to fight the injustice in his second album " Prisoners of Babylon ", which is live-recorded, under the name of Jah Prince and The Prophets, a big family of 7 to 12 musicians which has been produced in a large number of the halls and festivals in Europe.

The aborted projects for Africa 2010

Jah Prince was preparing the projects for Africa: with the help of the association Jahps, he wanted to build a music school, start a festival and series of concerts to comfort his country, Ivory Coast, that has been broken by the politico-economics interests.

Jah Prince got arrested at his home the 21 November 2012, then sentenced to an one-year imprisonment, under complex circumstances and some of them are confusing (dispossessed of all his artistic materials) in Ivory Coast. Unfortunately, Jah Prince will not receive any compensation for his confiscated musical materials (music and sound equipment, 3000 CD productions) worth 200,000 euros.

We fought against the forgetting of this reputed artist by organizing diverse manifestations and multiplying the encounters, then Freemuse and  Amnesty international gave us support.

After 11 months of the imprisonment, Jah Prince was forgiven and recovered his liberty the 17 October 2013.

Now he announces loudly his artistic return, with the recording of this new album and preparing for a tour scheduled for 2014.

Jah Prince is an original artist, who has the taste of risk, challenge and success, and we are sure you will rock!

We set a modest target of 4,000 euros, which will already help us firstly for this project.

This amount takes into account the costs of recording the album on live for 10 songs.

If fortunately our collection exceeds the amount that we set, the funds will be invested on the rehabilitation of prisoners in Côte d'Ivoire with the action of the Association Jahps.