This Europe is in crisis: everything is falling apart. Can the economic formulas help us? And if the solution could be found inside us? 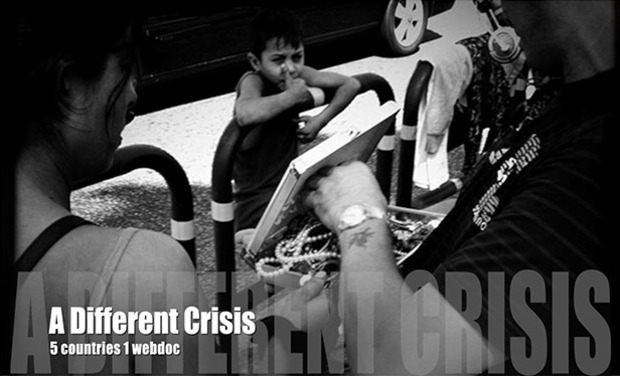 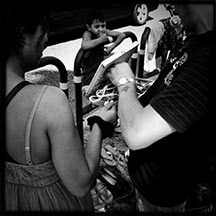 Our final goal is to create a web-documentary, a cross-media with videos, audio, texts and pictures.

Five countries on the brink of the abyss.

Even Europe is sinking in a very deep crisis: employment, health care, welfare, industrial system; everything is falling apart.

Eurobond, fiscal compact, spending review, sackings: are those the best ingredients of the recipe?

We think that the human being should be in the center, and that we can find - inside us - the best way out.

With our limited resources we have produced the first two episodes: the Greek one

and the Spanish one

Now we need your support to keep going on.

In every country we are going to visit we will try to balance the economic and social framework with suggestions and ideas from figures who can help us to bring again in the center our soul, our thoughts, searching a new perspective.

Furthermore we made up a blog where collecting stories, articles, pictures and movies about the current crisis www.adifferentcrisis.com and a Facebook account A Different Crisis Fan Page

The next step, with your help, would be Portugal, then Ireland and Italy.

We are planning to finish shootings and video editing by the next spring.

Christian Elia was born in Bari in 1976. Since 1997 he has worked as a correspondent in Middle East, Mediterranean area and the Balkans. Between 2003 and 2012 he worked at Peacereporter and E- il mensile. Currently, he is a freelance, collaborating with Micromega, Galatea and Il Fatto Quotidiano. His reportages were published by the most important italian media: Repubblica, Corriere della Sera, Alias-Manifesto, Venerdì. He is the author of reportages in more than 30 countries and was awarded with the Baldoni Prize on War Reporting (2011) and the Giornalisti del Mediterraneo Prize (2012) for his chronicles of the Arab spring. He wrote two books: Oltre il muro – storie di comunità divise and Storie in fuorigioco. He is the author of several audio reportages for some of the most established Italian and Swiss radio stations and the documentary movie The Empty House – which in its web documentary version was a finalist at Visa pour l’image, Perpignan, in 2010.

He has a degree in Law and a Master in Photojournalism. From 2005 to 2009 he has produced reportages from Iceland, Germany, South Ossetia (Georgia), Kosovo, Serbia, Bosnia & H., Albania, France, Kurdistan (Turkey), Sweden, Spain, Uk, Italy, Czech Republic, Greece, Hungary, Romania, Uganda, Spain. Author and director of The Empty House Author and director of MultiKulti Factory Author of The Iron Curtain Diaries (from Berlin to Burgas)

Videomaking and video editor, storytelling, new media and documentaries are the main ingredients of his work.

Gianluca Cecere was born in 1968 in Naples, Italy. He is represented by Laif Agency and works both on his own and on assignments from main Italian and International magazines; he has focused on photoreportage on social issues. He has also worked in several webdocs such as The Empty House, MultiKulti Factory

Media ownership is more and more concentrated in the hands of a few corporations, which are often involved in the same financial processes that generated the crisis. We are asking for your help, in order to combine professionalism and independence with substainability and to support independent journalism.

9500€ multimedia and postproduction. A lot of money, right! But you have to consider that producing a multimedia requires several different expertises – to build a website, to translate contents into English and Italian etc. -, therefore it is based on the collaboration among different professionals: a web designer, a translator, a graphic developer etc. Multimedia combines texts, audios, still images, animation, video or interactive content forms. Moreover we are also planning to produce a linear video editing for local and international broadcasters.

4300€ travel and accommodation. A few money, right! But thanks to the support of A Different Crisis's friends, their willingness to accommodate, the rental car, etc.. we'll be able to realize very low cost travels.

Exceeding money will be invested in promoting the project.

the DVD of the webdoc + previous compensation

A Multimedia workshop in the beautiful Naples (travel and accommodation expenses excluded). A one-day overview session focused on the art of digital storytelling + previous compensations