An ambiguous dance duo! Would you help us producing the trailer? 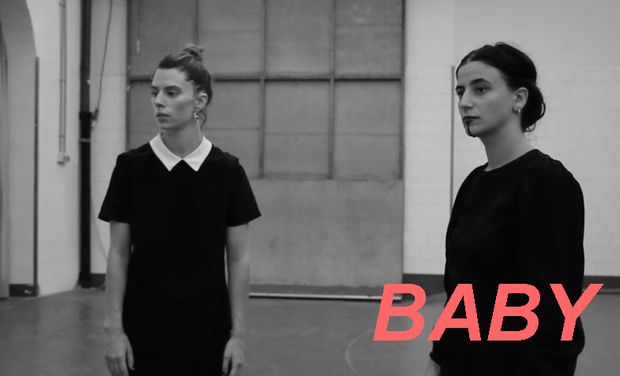 Baby is a duo performance created by the dancers and choreographers Viktoria Andersson and Frida Giulia Franceschini. They ask for your support to fund the production of video material ( trailer + official video + official pictures ) necessary for the promotion of the show. Can you help?

Next 13th of February the performance will be presented at I Macelli No Theatre in Certaldo (Italy), and the week before will be dedicated to rehearsing and shooting the video material.

The performance was co-produced by NO! Norrlandsoperan Umeå in collaboration with Ricklund Gården Säxnas ( Sweden) and I Macelli No Theatre Certaldo (Itay) between 2014 and 2015.

Baby premiered at Le Murate in Florence, in the context of Fabbrica Europa'15 Festival.

Baby is the creative effluence that arises from the encounter of these two young performers, a creature/energy that is both an abstract/conceptual being and a physical presence on stage, a third element that slowly possesses and moulds the characters' rhythms and behaviors.

This work isn't only based on dance: it is also the result of an experimentation that deeply delves into the realms of performative exercises, role play, night walks, karaoke and funny compositions.

The desire to maintain a delicate simplicity has left a certain amount of hollow fertile space inside the projects core, creating a balance between full and empty.

The naked dramaturgy is preciously encrusted with almost imperceptible misunderstandings, little innocent mysteries that show themselves from time to time, winking sympathetically towards the audience through a fog of poetry and naiveté.

Viktoria Andersson (Umeå, 1985) is a Swedish dancer and choreographer.

With a background in basketball and theatre, she studied dance in S.E.A.D. Salzburg Experimental Academy of Dance (AT), graduating in 2009.

Since then Viktoria worked for Avart Dans & Rörelse, Kubilhi Khan Investigation and Nomodaco Dance Company; she collaborate with Makkan IIoII and Ida Hellsten at the creation of Playground and Tuttifrutti.

Frida Giulia Franceschini (Bologna,1987) is an Italian performer and choreographer.

With a background in visual arts and ballet, she studied dance between The Nederlands, Austria and Belgium. Frida worked as freelance for few european artists and choreographers like Rita Vilhena, Dani Brown, Alias/ Guilherme Bothelo Cie, Giorgia Nardin  Currently Frida is performing internationally for Alias and Giorgia Nardin.

Frida and Viktoria are based in two different countries and they often travel around Europe for works, but they share a deep friendship and a lively artistic dialogue: this kind of intellectual affinity makes them precious interlocutor one for the other.

Between spring and autumn of 2014, they started conceiving their first project:  thirty three minutes of original material, created for specific contexts that detach themselves from the classic and claustrophobic theatre box - a huge gym/swimming pool in an old abandoned hotel in Lapland, a former slaughterhouse that is now a theatre in Certaldo, Italy.

The two know each other since 2008, when they met in Salzburg during the S.E.A.D. company's postgraduate BODHI Project. A few years later the two reunited in Brussels, where they lived together and shared many learning experiences and studies focused on contemporary dance, yoga and theatre.

Volha Iotchanka (1985) is a Lithuanian artist/video maker based in Bologna.

Graduated in Theory and Practice of Contemporary Art at Vilnius University, she moved to Italy to deepen her knowledges in the curatorial field of contemporary art and worked for BTF Contemporary Art Gallery and Xing in Bologna. Currently Volha work as free lance maker; she is interested in pushing forward her research in a multidisciplinary way, passing through photography, performance art and visual investigation.

Volha already worked with the performers at a preliminary documentation/ shooting of the piece. Viktoria and Frida value her vision and the fine understanding she has of the atmosphere they wanna re create in the video and they are thrilled at the idea of working more on it together!

This funding will help us cover the production costs of the production of video and photo material ( official trailer + official pictures + full-performance video), fundamental for the promotion and the distribution of the performance.

Although the creation was co-produced by two generous theatre houses, the production of video material it is on us.

With the 1200 euro requested we are gonna be able to:

We decided to use the crowdfunding system to fund this project because we are really interested in inviting people to know our work from a close prospective: to get to know its details and poetic, but also the commitment and the dedication behind it.

As freelance artists we know very well the importance of a supporting community. Supporting young makers and the development of their creations, especially in the specific moment of promoting their work, it’s fundamental.

Thank you! An official thanks on fb with a scary picture dedicated to you.

Thank you so much! Special thanks on fb + a video extract from one of our charming rehearsals (LOL)

Ehy.. thank you!! Special thanks on fb + digital pictures of Baby, a video extract of our rehearsal and music playlist made by us just for you.

Thank you very much, we wanna hug you! All the rewards above + link to the video of the show!

Super.Thanks for the support!! All the rewards above + a ticket for our performance on the 13th of February at I Macelli (Certaldo). And let’s have a drink after the show!

Thanks, for real! Your donation is really generous!! All the rewards above + a Skype call where Viktoria and Frida are gonna tell you a secret.

Thank you so so much, words can’t explain our gratitude! You’re truly amazing! All the rewards above, of course + you will have your name on the credit of the show and a video where Viktoria and Frida sing a song for you.

Wow. Thank you. You’re officially a co- producer of Baby! You gonna receive all the rewards above + a dinner with us. Looking forward to meet you!