Let’s give Pooja a home and education together!

Help Pooja (11) avoid child marriage and prostitution. Give her a chance to escape the street for a better environment: Boarding home and school! 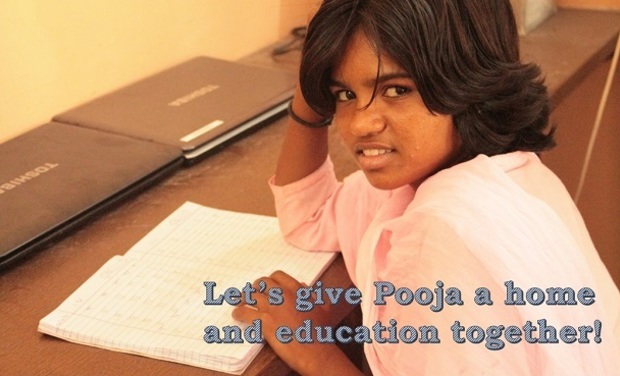 Let’s give Pooja a home and education together!

Update 22/12/2016: A big THANK YOU for Pooja, together we reached even more than the 2000€ Let's keep going ths amazing mobilisation to finance more than 2 years ! Please share and donate !

Pooja is an 11-year-old girl living on the streets of Jodhpur, India. As many other girls in Rajasthan, she is deprived of a decent education and a safe living environment where she is prone to becoming a victim of child marriage by the age of 12 and increases her vulnerability to harmful professions such as child prostitution.

We want to influence Pooja’s future by offering her a spot at Sambhali Trust’s Boarding Home.

It is a place where girls are provided a nurturing home and education, where they are able to develop, learn and unleash their ambition.

It only takes 2000€ to change Pooja’s life. By making a contribution, large or small, together we can give Pooja a promising future!

We are volunteers for the Indian non-governmental organization  Sambhali Trust who are currently working to empower women and girls in Jodhpur through education and vocational training.

In fact, the state of Rajasthan is known to be conservative and patriarchal. In this society, women’s conditions are more difficult. As education is still considered a privilege, illiteracy among women is unfortunately common. Low educational rate is related to child marriage, a custom banned by the Indian government but still a large part of the Indian society. Socially, economically and educationally deprived, these women are also more vulnerable to violence among their family and the community in general. (source)

Since 2007, Sambhali Trust is working to improve the lives of women in Jodhpur through education. English, Hindi, Mathematics and vocational training such as embroidery and sewing classes are given daily in eight different empowerment centres throughout Jodhpur.

For her young age, Pooja already has an incredible life story. With your help we hope to change it for the better. She has been living in a small hut on the street of Jodhpur with her younger brother, mother and father for as long as she can remember.

Since August 2016, Pooja has been coming to the Empowerment Centre to learn to write and read Hindi as well as sewing. At the centre she met many other young women who have become her friends. However, this might be her only opportunity to connect with other girls during the day.

Laura, a volunteer from Germany asked her to describe her daily life:

“I wake up in the morning. Then I wash my face and brush my teeth. Then I come to the Centre by van. For lunch I eat roti and vegetables. Then I collect garbage on the streets. I help my brother, I teach him. We live in a hut and we sleep in a cart. I dream of having a house because I currently live on the street." (Translated from hindi)

When Pooja returns from the centre she has to help her mother and brother to collect garbage with a cart. We asked her what her biggest wish for the future was:

“I like to learn. I would like to have a normal job. For example police officer. I would like to see another country, but I don't know which one. But the Clocktower in Jodhpur is fine, too.”

Pooja is a very smart girl and very eager to learn. Despite having quit school at a young age she is progressing fast in the centre. She can already read and write in Hindi and she is able to have a short conversation in English. Her mother is forced into prostitution in order to earn enough money for the family. Her father is mentally and emotionally distant to his children and wife. Consequently, the centre remains the only place where she is treated as a girl her age should be.

Pooja’s parents are unable to support her anymore. This means she will become married within a year – at the age of twelve and with an older man. Child marriage and prostitution would be Pooja’s destiny if she has to keep living on the street.

"Girls in Indian states like Rajasthan, Madhya Pradesh, Chhattisgarh, Uttar Pradesh and Haryana rarely make it past Year 5 at school. That is when their education ends and married life begins." (source) However, with education the custom of child marriage can be abolished.

The Boarding home is a program established by Sambhali Trust to offer education to rural girls, typically from underprivileged lives. There are 22 girls currently living at the Boarding Home. The girls also attend Galaxy Public School of Jodhpur.

The girls at the Boarding home are accompanied by volunteers for 3 hours per day. During this time they do homework together, workshops and other activities such as dancing, singing, reading, visiting temples or doing sports. Most of the girls have been living at the Boarding Home for 5 years and their education has rapidly increased as well as their self-esteem and confidence.

In the long term we would like Pooja to complete her education at Galaxy Public School of Jodhpur and live in the Boarding home for 5 years. When Pooja was asked if she would like to attend the Boarding Home her face lit up with excitement.

Without having a scholarship or any other financial support, the Trust is unable to afford one additional place in the Boarding home. In order for Pooja to be able to attend, her living and education would have to be financed for 2 years before finding a long-term sponsor.

As young volunteers working on grass root projects we see the potential Pooja and other girls in her situation hold. Thus, we are confident that the Boarding Home will change Pooja’s life and positively impact her family. Every Indian girl you educate directly contributes to the development of India’s future generations.

In the following chart, you can find the different account heads and the amount of euros (rupees) needed for the time period 2017-2019 at the Boarding home and at Galaxy Public School of Jodhpur.

It only takes 2000€ to change Pooja’s life. By making a contribution, large or small, together we can give Pooja a promising future!

When we will achieve the 2000€ goal, every additional euro will be invested in Pooja's further education and the next three years at the Boarding home.

बहुत धन्यवाद ! (Thank you very much in Hindi)

You will receive a "THANK YOU" picture from Pooja.

You will get a "THANK YOU" and greeting video from Pooja.

You will receive a "THANK YOU" and greeting video from Pooja + a greeting card made by Pooja.

You will receive a "THANK YOU" and greeting video from Pooja + a handmade bracelet from Pooja + a 10 % discount on handicraft products from the Sambhali Boutique.

You will get a "THANK YOU" and greeting video from Pooja + a greeting card made by Pooja + a handmade bracelet from Pooja + a 20% discount on handicraft products from the Sambhali Boutique.