Help us to collect the half of budget, counted to cover edition of 301 cps for our independent publishing edition. LET'S PUBLISH THE UNPUBLISHED! 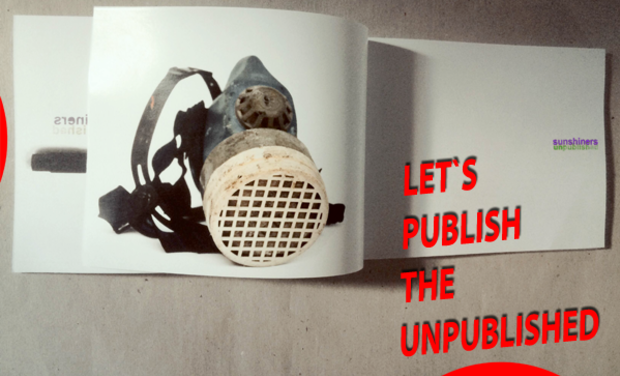 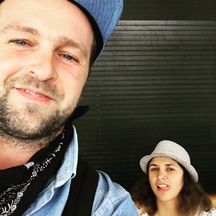 The Bulgarian street art duo called SUNSHINERS, gets together Viktoria Georgieva as known as MOUSE and Nikolay Bozhinov - NIKKAWHY, both with roots in the field of Graffiti Art. Since 2009, when they  did the first artwork in collaboration, they haven`t stoped creating their urban emoji. The artist tandem interprets their pictographs onto different kind of urban surfaces and forms, using any kind of materials,  but mostly and usually industrial paint and spray cans. They breathe new life and meaning to many neglected and ownerless walls and objects of urban space. The last five years their art work handles  independent projects in public and private spaces around Bulgaria and abroad. Their unofficial tour called The Sunshining Journey, which starts in 2014 and crawls provincial cities in Bulgaria, Macedonia,  Romania, Serbia, Spain and Germany. Wherever they are, they live performing, initiating public workshops or demonstrating interactive art tips through games for kids and adults. Working generaly in the public space,  The Sunshiners get organized solo exhibitions and group shows as well. Their gallery pieces and installations are connected and planned by the exhibition space. Their thinking of gallery is a new media option, which  provokes them to ride the challenge.

Currently they are living and working in Varna, Bulgaria

*Artwork by SUNSHINERS, from their participation at MOS San Francisco, moved to Chinatown, Oakland, 16-18 September, 2016.

In the beginning of 2014 they have starting work on limited edition of fanzines.

THE HOUSE OF FUN,

-are some of the ideas waiting to grow up in editions.

Unpublished by SUNSHINERS is edition, which collects artworks, created by the artistic duo in the period between 2014 and 2015. The edition content includes three visual chapters, the first called Urban Emoji / from Japanese e (絵,"picture") + moji (文字, "character") / shows the ultimate from 2015. The second chapter presents projects created on the way of the Sunshining journey, unofficial tour starts in 2014 and crawls provincial cities in Bulgaria, Macedonia, Romania, Serbia, Spain and Germany. The third chapter called Collaborations, as you already guess, includes collaborative work created in the same period of time.

They decided to extend and add more chapters, and to get in the begging of 2017 a solid proper designed book dedicated to their work.

WHEN WE WANT IT?

We are working on our latest projects for 2016. After that, as we always did, winter time is time we are closing at our studio, in process of selecting and preparing all photos from 2016, so we could get them into that edition.

We would like to start the new year painting season with a tour presenting to the audience the current publishing.

Looking forward to present you the Unpublished by SUNSHINERS in May, 2017.

THANK YOU IN ADVANCE!!!

+ YOU FUND IT, IF YOU LOVE TO SUPPORT INDEPENDENT PROJECTS BASED ON ARTISTS-RUN-IDEAS!

We have been working on this project since we are working together.

We have been working on all included ideas, artworks, photographies, cover and template designs, logo typing  and colouring.

+YOU FUND IT, IN CASE TO BE PART OF OUR FIRST IMAGEWRAP AND HARDCOVER FULL-COLOR 100 PAGES INDEPENDENT PUBLISHING THAT PRESENTING OUR WORK!

We are choosing to work with BLURB, online publishing house, that gives us professional vision and good price.

OUR GOAL IS TO REACH 7,817$ THIS CROWDFUNDING CAMPAIGN CORRESPONDS TO ONE HALF OF THE AMOUNT. IF WE EXCEED OUR FINANCIAL OBJECTIVE WE WOULD LOVE TO EXCEED THE VOLUME OF OUR EDITION AS WELL.

THANK YOU ALL KISS KISS BANK BANKERS FOR SUPPORTING US!!!

*without you we can not do that.

We would love to thank to Aleksi Ivanov and Slaven LUNAR Kosanovic for their professional opinion on our work.

Thanks to our families that always support us on our way!

BIG UP friends from all around, we love you!

THANK YOU FOR YOUR CONTRIBUTION! YOU ARE RECEIVING mixed pack of 3 prints, size A6, signed and numbered by MOUSE&NIKKKAWHY | SUNSHINERS.

THANKS A LOT FOR YOUR CONTRIBUTION! YOU ARE RECEIVING mixed pack of 3 stickers, various sizes, by MOUSE&NIKKKAWHY | SUNSHINERS.

THANK YOU VERY MUCH FOR YOUR CONTRIBUTION! YOU ARE RECEIVING high quality print A3, 250 Tintorreto paper, singed and numbered by MOUSE&NIKKKAWHY | SUNSHINERS.

THANK YOU FOR YOUR CONTRIBUTION! YOU ARE RECEIVING one copy of FANTASTIC BINOMIAL, interactive fanzine (limited edition), signed and numbered by SUNSHINERS.

THANK YOU SO MUCH FOR YOUR CONTRIBUTION! YOU ARE RECEIVING T-SHIRT, limited edition, two sides silk-screen printed, singed and numbered by MOUSE&NIKKKAWHY | SUNSHINERS.

THANK YOU DEAR!!! YOUR CONTRIBUTION REACH OUR GOAL!!!! NOW GET PREPARED YOUR WALL BECAUSE WE ARE COMING WITH OUR PRESENT. MURAL PAINTING by SUNSHINERS* ** * including all materials needed, the wall must to be inside EUROPE. **excluding ladder or scaffolding.