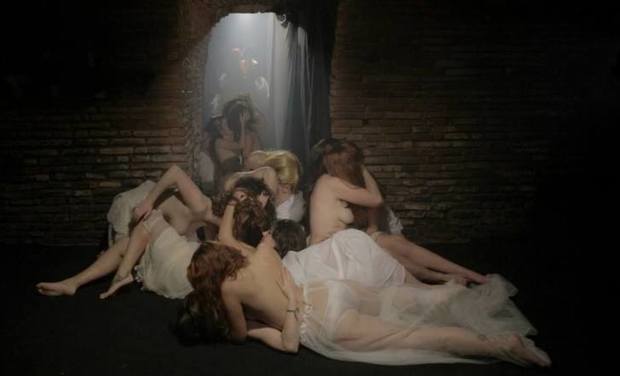 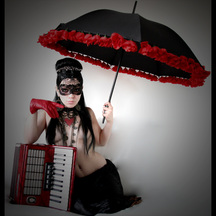 Performance art is a means of expression based on the rhythm, duration, the freedom to dispose of its own body and the sharing of this freedom; I intend to highlight, with the video image, a poetic and engaged staging.

I wish to express that "perform" is an act that reflects the speed and the violence of life. Video can be an interesting medium to capture limits and experience the climax of this moment.

The five chapters of the movie are :

Variation 1: Les Souliers Rouges (The Red Shoes), Introduction of the film in construction

Variation 4: Je tombe avec toi (I fall with you)

The narrative of the film is various rituals that aim to invite to think several themes like Children, religion, Love, Sacrifice, Sexuality, and the boundaries between oneself and others.

With this film project, my ambition is to celebrate together different body and the flesh around the video image, in order to understand all the peculiarities, differences and possible fields of expression but also collect all of my performances in a feature film. This is particularly the image of the body outvoted by the standard that interests me: the female body, transsexual body, the disabled body, the body sexualized or racialized... Making a film where the off-standard stages himself is only a way to celebrate a crazy vision power of life: its beauty, its madness, its chaos, its truth, its limits.

Between the legacy of body art and ritual practices, dance, theatre and circus; performance art is complex to explain. Through this film, I would show the testimony of ancestral and contemporary practices.

This is an aesthetic image put on a political position, making on body a scenic area where everything seems possible, if its desired. An invitation to travel, breaking the boundaries there is between the private and the public, pornography and eroticism, the unconscious and the conscious, the feminine and the masculine, the dream and reality.

Different "tableau vivant" will be in specific places: theater, wine cellar, crypt, forest, apartment and castle; the five chapters of the film will be composed of different visual identities. From the primitive and instinctual symbol of a cellar, the theater stage where the body reveals itself, the cabaret where fantasies is taking shape, the forest and the castle where space and architecture suggest fairy tale and then the garden where pagan festivals and the “queer” vision will intermingle.

This film is a carnal picture where the protagonists do nothing else to perform their own lives, manifest their existence and sublimate reality. The idea filming the people who have chosen - or not - to live outside the ways, like education or social norms, is a means of breaking down the veil over reality and imposed our bodies as monstranum; its phenomenon of fair and exhibition; proud to belong to a community of Freaks, whose strength is carried by the strange and the weird, universe of Extraordinary.

My desire here is to poetry that unconventional beauty and intelligence.

Through this film I want to break some taboos while invited not to "open the eyes" but to close them to plunge into the tumultuous world of our unconscious, our dreams and our fantasies.

I want to give physical expression as a possible place of rebellion and insubordination for everyone.

Today, I started the shooting at the beginning of January and I will make a shoot per month until September. I want to finish the film to the end of 2015.

The target will support the last three parts of the film, thus bringing the entire feature.

Why support this project ?

- support an art project, in a world that tends to discredit artists and collectives, is giving life to the poetic and dream, culture and imaginative, outside the institutions, which defend their own view to the choice of what needs to be represented or not, what should be funded or not.

- Because the body is political (and that is not enough to say it), art is a way to act, react or screaming what seems essential and common to all. Participate in this creation is also a way to help to express the minoritized body. Support this project is to take a political stand.

- Because in our culture, the unconscious is not taken seriously enough, while it is the part of us the most "real" and the richest of our brain, through dreams, trauma and “psycho magic” (alternative medicine based on the performative action). Because art is a direct dialogue with that part of us - which certainly requires a specific device, expertise, technical and financial resources - and can offer a psychic underground path to this, between us all within a collective structure.

My name is AJ Dirtystein, I was born in 1984, I grew up in Guyana, and Paris. I have a Bachelor Literary / Visual Arts High School of the lycée des Arènes in Toulouse, and then I went to the University of le Mirail in 2004, to make a master 2 Research and plastic creation. I begin performance and exhibit my work in 2008-2009, in theaters, galleries, universities and private places. I realize - among others - "Accords Perdus", a performance combining opera, dance, ritual art installation and video. At the University Bordeaux Montaigne, I chose to do a thesis between visual arts and literature. Led by an engaged writer professor whose I admire the work, Jean-Michel Devésa, I choose to study the writings of women who stimulated my desire to make a tool of expression on my body. I am learning to get in depth in an analysis of artistic and political performance, through the experience of my own flesh. I get my Ph.D in 2014 and I did my first short film: "Don’t pray for us," aired at L’Utopia in Toulouse in September 2014. Today, I mix theory and practice, through creation (painting, photography, performance and video). I am currently working on editing my thesis and a post-doctoral project on sex workers, artists and writers.

Simon Dirtystein takes the images and deals all the logistics (driver, assembly, disassembly, craft ...). Jean-Noël Thierry takes images and also takes care of the lights. Baptiste NHK does the mounting and the post-production, he also takes images. Jean-François Daviaud helps us for the lights. Enzo Puxedu support logistics and sometimes assists me on filming.

Sacha Bernardson is the musician, he composed the original soundtrack.

Igorrr is also a musician, he agreed to participate in the soundtrack.

Charly Voodoo is a pianist, composer and performer; he created a piece for the film but also other surprises...

Thank you so much for the confidence they give me, for their professionalism and their brightness. I also thank all the interpreters and performers who participated for the chapter "Don’t pray for us", and all the women who made up the “tableau vivant” in Variation 1 "Les Souliers Rouges” and those who agreed to continue playing the movie (and I can’t mention them here because I want to do it in pictures).

What the fundraising will serve ?

Your donations will help me to achieve the full film: the three missing parts (Part 3: "A cœur ouvert," Part 4: "Je tombe avec toi" and Part 5: "Diaspora").

- Pay counterparties and the percentage requested by the website (8% of the minimum budget) (DVD, posters, prints, frames and shipping) [€600].

Additional objectives: If I exceed the target, I provided a second step, which is €4,000.

With this second level, I could pay three more performers to complete the picture (Clermont-Ferrand, Berlin and London). I can hire a makeup artist and maybe a hairdresser. The “tableau vivant” will be enriched, more ambitious and the general world more successful.

Finally, if the second level is exceeded, the film will then be even more successful and I could rent an extra room for the final picture.

The final level will allow me to rent a beautiful old carousel for the final scene. The price (€3500) includes the rental, delivery, service and accommodation for the technicians (two nights in hotel and restaurant).

Thanks on my Facebook, my website, the film website + The Vimeo codes to download the first part of "Don’t pray for us." + thanks in the end credits of the film + A personalized card (an ink picture 10 x 15 cm) + DVD movie when the film will be finished.

Thanks on my Facebook, my website, the film website + The Vimeo codes to download the first part of "Don’t pray for us." + thanks in the end credits of the film + A personalized card (an ink picture 10 x 15 cm) + DVD movie when the film will be finished + A movie poster 40 x 30cm, signed and numbered (to choose from three versions; limited series of 10 posters for each version).

Thanks on my Facebook, my website, the film website + The Vimeo codes to download the first part of "Don’t pray for us." + thanks in the end credits of the film + A personalized card (an ink picture 10 x 15 cm) + DVD movie when the film will be finished + An illustration of a scene from the film, framed and signed (to choose from 6 different artworks; sizes 45 x 75 cm).

Thanks on my Facebook, my website, the film website + The Vimeo codes to download the first part of "Don’t pray for us." + thanks in the end credits of the film + A personalized card (an ink picture 10 x 15 cm) + DVD movie when the film will be finished + A painting size 80 x 120cm from the series "Filles de putes et Menstruosités" to choose, signed.

Thanks on my Facebook, my website, the film website + The Vimeo codes to download the first part of “Don’t pray for us." + thanks in the end credits of the film + Personalized card (an ink picture 10 x 15 cm) + DVD movie when the film will be finished + A unique film photography 60 x 40 cm, signed and numbered

Thanks on my Facebook, my website, the film website + The Vimeo codes to download the first part of "Don’t pray for us." + thanks in the end credits of the film + A personalized card (an ink picture 10 x 15 cm) + A movie poster 100 x 70 cm, signed and numbered (to choose from three versions, limited of 10 posters each version) + original storyboard A3, framed, signed and numbered (to choose from the film scenes) or + a performance for a private or public event.