Help the team of ‪#‎Reine_Ruine‬ to create a short docu-fiction that will ‪#‎change‬ your perception on ‪#‎sexuality‬. 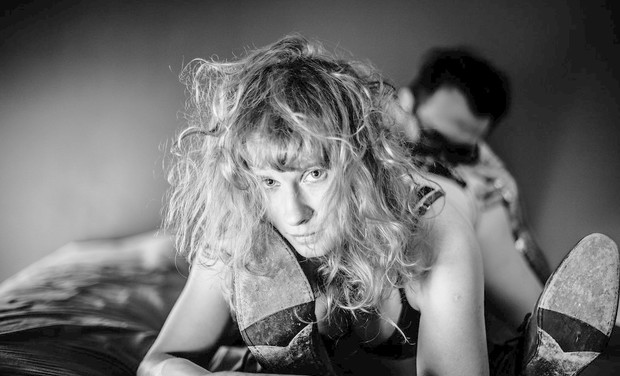 This short-movie is a fiction inspired by reality. It tells the story of a stubborn woman from New York City, Roxanne Parée. Spiritual, very sexual and deeply political, she wants to kill herself.

This project is a REVOLUTION.

This is the first step to a huge #change in the male&female interactions.

Now, in Iceland it is illegal for any business to profit from the nudity of its employees.

THE QUESTION IS: will it change the perception on nudity itself?

Business is not only about making money out of  women sex-appeal or nudity, but also about putting the BLAME on women.  Being topless, stripping, gogo dancing or having sex for money becomes something DIRTY and NASTY... in one word: BAD.

So, it's not about nudity, it's about shame.

People want to BUY what is forbidden, shameful and BAD.

People judge and still consume, which is a paradoxe.

When women's sexual attraction and nudity will be respected?

Only when you won't be able to buy it anymore...

Your donation can really make this story come to screen. Social crowd funding is a new way to promote and finance art by staying independent from the gouvernement or the producers. The money you donate gives you a big choice of gifts.

It's a story of a poor woman who everybody wants to have sex with, but nobody cares about. She changes the system, one man at a time.

Xenia Sin is an artist based in Montreal and a graduate of the National Theatre School of Canada and from HEC University, a business school, where she researched the management of creativity. Her work involves innovation in the world of art. Her goal is to help women and men (sex workers and sex clients) around the world.

POLITICAL PLAYGIRL is an epidermal and destabilizing plot between reality and fiction, pleasure and destruction, power and loss of control of Roxanne, a prostitute who tries to survive in contemporary post-feminist society.

The visual project is between crude language and refined poetry, outrageous images with chaste images,  hypersexualisation and self-criticism, submission and female resilience to dogmas of mankind.

POLITICAL PLAYGIRL reveals what women (more than we believe to) are thinking. The ultimate goal is to encourage men who consume commercial sex to make an introspection on how they live their sexuality. The project suggests that they are victims and perpetrators of a sexual and superficial capitalist propaganda. If many may seem doing well in this "sexual misery", it's because we are "programmed" for it.

The project wants to bring back all the vulnerability that exists in human sexuality as also reconcile men and women, giving back a sacred value to their relationship, breaking the sexual marketing and regain control on intimacy, decency and life privacy.

Quote from the short-film:

I FUCK to be on the top of MY game.

I fuck to OCCUPY those bankers, those judges, those politicians.

A HUG: A very big thank you for your support, we will keep you informed on the project and your name will appear in the credits of the generic.

A SPECIAL ONE NIGHT PARTY with Laurence Leboeuf, Xenia Sin and Irina Troubetskaia and male guests.

AN EXCLUSIVE HUG: Your contribution will give you access to a private link to watch our movie premiere.

A VISUAL HUG: You will be offered two tickets to the film.

AN HISTORIC HUG: Autographed photo of the team of the movie.

A POETIC HUG: You will receive a secret book with personnal stories of sex workers and their clients written by real people from the sex industry.

AN EPIDERMAL HUG: You'll receive a professional massage by Xenia Sin, director of the short-movie at the SPA LE TSAR located at 8674 St-Denis. www.spaletsar.com

A PARTY HUG: You will receive an invitation for (2) people to the Wrap Party in STRIP CLUB.

A CREATIVE HUG: You will be part of the 2 privileged people who will have the chance to attend a day of shooting.

A HUNGRY HUG: You will be invited to a "Dinner Date" with the director of the movie.

A HUG YOU WILL REMEMBER: Autographed postcard of the movie and a special cocktail created by the actress, Laurence Leboeuf.

AN EXCLUSIVE HUG: A special consultation with Laurence Bergeron Michaud, the sex therapist of the project.

A SECRET HUG: You will receive a private punk rock sexy go go performance with a touch of some dirty lap dance.