Performing in Asia/India was always a dream for us, today this dream could come true thanks to your help ! 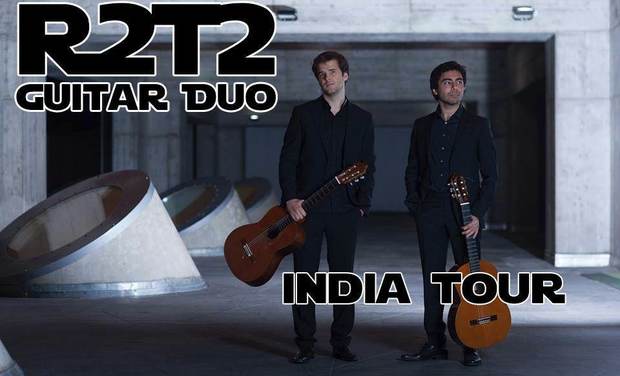 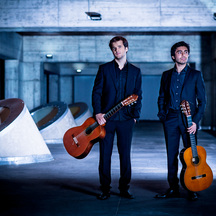 The India guitar tour project  is a 3 week tour around India, in major indian cities, but also to smaller towns, such as Mangalore, my (Tizoc's) grandfather's hometown.

Our classical guitar duo (R2T2 guitar duo) will be touring from the 9th of September to the 1st of October 2016.

Our wish is to present our western classical guitar repertoire to the indian public, young and old, of all horizons. It will also enable us to learn and get enriched by the indian culture and music.

Performing concerts in such cities and offering guitar masterclasses will be the opprtunity to discover and exchange between European and Indian cultures ! We will be giving masterclasses to young guitarists who do not have access to much musical facilities during the year.

During our first week in Calcutta apart from the concert at the Monsoon Music Festival, and our scheduled masterclass, we will be offering music workshops with young children living in very poor conditions and who have hardly any access to musical education.

Our first contact with the sudents will be divided in 5 days of personal courses that we will be giving to each student individually (20 to 30min) per day, as well as Workshops with a specific topic that we will be talking about in public !

At the end of each day, we will also be doing an ensemble course for all the students at the same time. They will be performing together a piece that they will be preparing regarding the final concert that will take place at the end of the festival.

Finally on the last day of our stay we will be performing a small music workshop for children living in very poor villages, in order to sensibilize them to classical guitar music, and give them access to our musical knowledge.

The tour will include several cities aroud India such as Calcutta, Bangalore, Goa, Pune, Chennai, Dehli and more where different local organisations will be taking care of the logistics of the concerts ! The travel between the different cities are taken care by the different guitar organisations in India mostly done by plane !

Monsoon Music Festival in Calcutta (See description in chapter above)

27th-28th of September : Concert and masterclass in Chennai

We are 2 classical guitarist based in Vienna Austria that gave birth in 2011 to our classical guitar duo the "R2T2 guitar duo". Since then we have performed in several cities around Europe and North America. Having taken part in several international competitions was always great expenriences, but performing in Asia had always been a very special dream that we had since a long time !

We also try to make our repertoire as open as possible going from the baroque periode till composers of the 21st century. This helps us adapt to the different demands of the organisers in order to be sure to satisfy our audience.

Some of our most memorable experiences were performing in the international guitar festival of Paris in 2013 (The main guitar festival in Paris/France), recording our first CD demo with Baros records in 2014 and this year, touring around India. This is how much this project is important to us !

I have had the chance to travel a few times to India, to visit my family and had always wondered what it would be like to perform there one day. This tour will be a great opportunity to make this wish happen !

India is special to me since it is the homeland of my grandparents. My grandfather was born in Mangalore, Karnataka, and travelled to Europe, were he settled in Paris, France. He would regularly come back to India during winter time since he did not like the cold weather in France and missed his native land ! Here is an Interwiew from the newspaper Times of India, of him talking about it and msyself performing a small music piece to him !

We would often take longs walks in parks in witch he would tell me many stories of his childhood, the indian culture, as well as the different experiences he had while living there, wich made me even more curious and sensible about indian culture. I learned a lot from these talks with him !

Having myself many relatives on my mothers side living there, this project is even more special, and makes us work even harder to make it happen at its best !

In order to perfom in so many different cities, several organisers are involved in this project. We would like to thank them for their enthusiatic support towards our dream project to perform in India :

It is also important to understand that finding financial ressources for such projects is not easy and demands a lot of energy in India, however after interacting with several members of the organising community we do know that they did there very best to make this project happen !

All of them are trying to promote classical western music with the help of associations and people accepting to take part in them, however it is always a big challenge to organize them, and we are very happy to be able to take part of it, thanks to them !

We hope that you will feel sensible to this project and share our enthousiasm as well as the enthousiansm of the organisers to promote western classical guitar in India !

Most of the internal expenses of our tour will be covered by the different organisations (Indian guitar Federation, EPTA India Associates, Poona Music Society, Shisha Café...).

However we have to pay for our international plane tickets  : Vienna-Dehli and Dehli-Vienna.

We will also have to cover food and lodging expenses  in Bangalore and  Dehli, as these expenses are not covered by the organisors.

Being ourselves musicians, we love to do such projects but our financial support are sometimes too humble to cover all the costs of these adventures !

Our fund raiser KissKissBankBank would be covering :

-Visa E-tourist that will permit us to tour in the country : 120 euros.

We would like to thank all of you for your support and hope you will be adhering to this very special project !

Special thanks on our Facebook Page as well as a post card sent to you from India from the cities in wich we will be performing, as well as a traditional gift from India that will come with it.

A special thanks on our Facebook page, as well as a private video of 1 music piece in the style of your choice sent to you via we transfer (e-mail required) with a special thanks of the 2 artists at the end of it.

A special thanks on our Facebook page, a special gift from India, a CD demo signed by the artists a private video sent to you by the artists, as well as a special public thank you during our last concert in New Dehli.

Special thanks on our Facebook page, a traditional gift from India sent to you, a CD demo signed and sent to you with the signatures of the artists on it, a private video sent to you with a special composition made for you and a public thank you at the end of our last concet in New Dehli.