Singer-lutenist Ricardo Leitão Pedro sings and plays Bellerofonte Castaldi for his debut solo CD, intertwined with his own music and poetry. 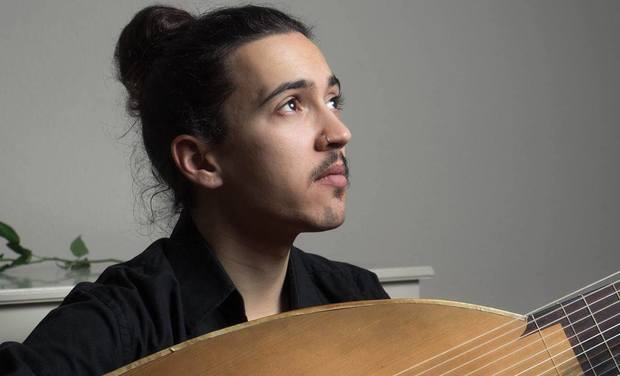 Bellerofonte Castaldi was born in 1580 in Collegara, southeast of Modena, Italy. The classic Renaissance man: composer, singer and theorbo player, he was also a poet, visual artist and over-all adventurer.

Restless and outspoken, the eccentric Castaldi frequently criticised the hypocrisy of politicians and churchmen and as a consequence was frequently imprisoned and banished for his sharp tongue. Underneath this bold persona, however, lied a quieter soul who very much enjoyed simple country life and filling the evenings with music and poetry in the company of close friends, wine and tobacco.

Unlike most musicians of the time, who typically would be employed by a patron or court, Castaldi managed to live most of his life from his family's estate gainings, determined as he was of the importance of his freedom as a dilletante bourgeois.

He was nevertheless acquainted or even personal friends with several of the most important artists and minds of the seicento, many of which expressing for him a great deal of respect and admiration such as Claudio Monteverdi, poet Fulvio Testi, cardinal Alessandro d'Este and the printer Alessandro Vincenti. The two most well-known theorbo-players of the time, Girolamo Kapsberger and Alessandro Piccinini, were also part of his circle.

Fascinated since childhood by the singer-instrumentalists of Antiquity and their ever-changing incarnations throughout History, Ricardo Leitão Pedro is one of the few musicians today dedicated to the historical practice of singing al liuto, accompanying himself to different early plucked string instruments.
Born in Porto in 1990, he took the lute at the age of eighteen inspired by a concert by Hespérion XXI and encouraged by his classical guitar teacher Pedro Fesch. A year later he was accepted to a bachelor degree in early music at ESMAE (Porto, Portugal), during which he received an Erasmus scholarship to study at the Conservatoire National Supérieur de Musique et Danse de Lyon as student of Eugène Ferré.
In 2013, he moved to Switzerland to continue his studies at the prestigious Schola Cantorum Basiliensis where he completed a bachelor degree in medieval and renaissance lutes with Crawford Young and Marc Lewon and a master degree in singing with Dominique Vellard.
He has taken private lessons and attended masterclasses with singers such as Margreet Honig, Gerd Türk and Patrizia Bovi as well as lutenists such as Paul O’Dette, Hopkinson Smith, Eduardo Egüez and Rolf Lislevand.

A member of Concerto di Margherita (EEEmerging ensemble 2017-2018-2019) and I Discordanti (EEEmerging ensemble 2016) with whom he maintains a busy schedule all over Europe, he is regularly invited to collaborate with different ensembles and orchestras both as a singer and a lutenist (Orquestra XXI, Coro Casa da Música, Capella Sanctae Crucis, Troxalida, Agamémnon, La Boz Galana, Domus Artis).
His duo with lutenist Guilherme Barroso won the 2nd prize (1st prize un-attributed) at the JIMA competition (Oeiras, Portugal) in the category of chamber music.
Eager to explore other creative realms, he maintains a habit of improvising with contemporary dancers and circus artists and collaborates in different multi-disciplinary projects. He composed the music for the trapeze solo performance ‘Planisfério’ premiered at the FIS festival in Póvoa do Varzim (Portugal) and was the selected musician of Rostislav Novak (Cirk La Putyka) for his research group at the contemporary circus festival Die Originale hosted at the Berliner Festspiele.
Also invested in musicological research from the performer’s point of view, he is currently preparing an edition of the songs and lute pieces found in the ‘Thibault lute manuscript’ (F-Pn Rés. Vmd ms. 27) to be published by Basel-based label Terem-Music.

In the preparation of this debut CD recording, I've let myself be inspired by such a particular persona such as Castaldi into my own singing, playing and writing.

The project carries the hope of bringing this lesser-known musician and artist to a wider public's attention, as well as his musical instrument of choice to play through the night (the theorbo, known in seventeenth-century Italy as tiorba or chitarrone), in both its original aesthetic context as well as in the one of nowadays, modern and very much alive with music written today by the players themselves, as it once was.

Thank you very much in advance for all the support you might be able to give, either by donation or sharing with your friends. I'm very glad to be able to share this music with you soon.

Sessions will take place towards the end of April in the church of São Pedro de Miragaia near the Douro river, Porto, recorded and mixed by Ricardo Pinto.

Packaging and shipping of the rewards

Public thanks to you

The above + Link to download digital version of the CD

All the above with autographed CD

All the above with 2 autographed CDs

All the above with 3 autographed CDs

All the above + A private concert anywhere for you and your guests! (travel and accommodation expenses not included)