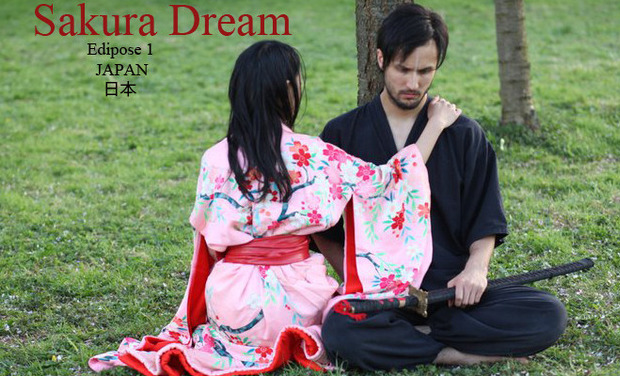 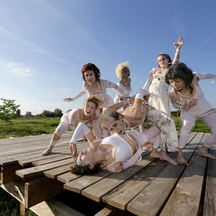 The 1st episode of "Sakura Dream" is the beginning of the story set in the pre-ancient Japan when spirits and human strived together in harmony, maintaining the fragile balance between the two worlds. The spirits were able to descend and dwell among humans to have experiences of the body/mind phenomenon, senses and emotions, and humans were able to enter the spirit realm seeking the experience beyond bodily sensations and the mind...but always only for the guidance and the strict rules and sacred laws to be obeyed. This is when the characters have met for the first time in the fatal circumstances, which end up in the premature tragic death of all the main characters, who are bound to meet time and time again in different constellations throughout different times and in different places to redeem themselves.

The sprit of Sakura (cherry blossom) was sent to the realm of humans as a beautiful female, who was to become the first geisha to advocate the law of impermanence through music and dance. Her mission was as well to find the other spirit  - Typhoon  (of chaos and destruction), who has arbitrary descended from the spirit realm and dwelled among the humans beings in order to convince him to return the real of spirits. They have met as Typhoon became a maiko, an apprentice to the geisha, and has fallen in love with her. The sacred law, which governs both worlds and maintains the balance, prohibits for the spirits to fall in love with humans and cause anything that is against the traditions and customs of the human realm and might upset the status quo. This (homosexual) love was impossible due the traditions at the times and Sakura obeyed the law. So in an attempt to maintain the balance she rejected Typhoon, which resulted in her fury. However when Sakura encountered the samurai, who rescued her from on the traps set by jealous and revenge seeking Typhoon, they both were unable to resist falling in love, only to discover soon the impossibility of this affair. Sakura cannot break the sacred law by falling in love with the mortal, while the samurai cannot break the code of honour by falling in love with the geisha, who’s danna is his master and being engaged to marry his daughter. Although they were trying to obey the laws at first, their feelings for each grew stronger and they have crossed the invisible line. Their happiness was short lived as they were betrayed by the jealous maiko and the furious warlord, danna of the geisha and the master of the samurai, ordered him to commit seppuku to atone dishonour. The situation further escalated due to the desperate attempt of   the geisha to save her beloved one causing the outbreak of the war between two rivals warlords, which brought about destruction and suffering, resulting in the tragic premature death of all the main characters.  The samurai and the geisha committed a double suicide in hope that they would meet again some place some day when their love could blossom.

Sakura was banished from the realm of spirits for breaking the sacred law and was punished to 1200 years of reincarnation as a human without a trace of memory of her origin bound to re-encounter her beloved samurai time and time again always experiencing viraha (the pain of unanswered love) until she would finally be able to transcend the human love altogether and develop loving kindness and compassion to all the living beings. Only then she would regain her honour and would be able to return home… Only then her wish would be granted to re-unite with her beloved samurai during the last reincarnation as a human to be able to experience a true love.

The first episode of "Sakura Dream" unfolds through poetic language of dance, gesture and movement telling the story of the beginning set in the pre-ancient times In Japan to be filmed on various locations in Tokyo and Kyoto. An (Inter)national team Re-United Now-Here gathers  this April to create a site-specific performance in the Fushimi Inari Shrine  (Kyoto) and shoot the material for the first episode of the film on various locations in Japan. A Tokyo based German film director and cameraman John Wate joins the forces with an Amsterdam based artist  who is the artistic director of Re-United Now-Here Inga Cholmogorova (butoh stage name Sakurako) to bring the first episode of "Sakura Dream" to life. Further an incredible cast of (inter)national dancers and musicians will bring their talents together to create the piece, including Maya Murofushi, Noriko Omura, Yasuo Fukurozaka, Toru Fujimoto, Kae Ishimoto, Phil Von and others.

We part just to meet again some place some day… and when we do – our dance is the only chance to break the eternal recurrence curse.  The encounter of bodies thrown into the unknown without a trace of memory as they just awaken from the oblivion of a dream. They interact to remember the past, to foresee the future, to remain present in the present, to find out who they are and why they are now-here.

The story of "Sakura dream" is a myth like saga unfolding throughout a series of performances and the dance-film and a publication as the end result.  The idea that the group of 12 main characters are bound to re-encounter each other in different times in different places in different constellations throughout countless lives due to the mistakes they have once made, until they will be able to learn their lessons, to regain the honor and restore the balance.

I have a an idea and a dream,to create "Sakura Dream" a karmic saga told in the episodes of site-specific performances and a short dance film and a publication. I have started to collaborate with two Japanese  dancers to sketch the idea in 2011 (when it was first conceived) in Amsterdam, further the pilot episodes was created as a live a performance  By Re-United Now-Here" in Amsterdam in 2012 with an international team of 13 dancers and other artists. Now I'm in Japan for study and research purposes and through amazing serendipity of events I have encountered and gathered together an incredible team of dancers and artists sharing the vision and willing to contribute to make it happen - to create the first episode of Sakura Dream ( set in the pre-ancient Japan) here in Japan this April!  However I have no budget  for the production as I did not anticipated to work on this project yet,  but the lucky circumstances bringing all those talented people together willing to work on this project as the "re_united Now-Here" team now, requires of me to seize this opportunity and therefore on behalf on the crew I ask for your help to make it happen.  An amazing team of talented dancers and artists some are coming from Europe will gather in April in Kyoto when cherry blossoms are in full bloom to create the first episode of this saga. The dancers, actors and the film makers  as well as musicians will bring their talents, precious time and hard work to create together what would become the first episode of "Sakura Dream"  dance film and a live performance  in the Fushimi Inari Shrine in Kyoto. So far we all contribute our skills and time fueled by shared enthusiasm to make it happen, however we need your help to realize this dream to be able to cover some basic expenses like transportation, accommodation in Kyoto for the cast coming from other places, equipment, studio for rehearsal, etc. Please help us to make this project happen and become a part of it, as for rewards you get behind the scenes photos and videos with a possibility to vote to participate in the artistic process of creating the piece, you will get an original artworks ( signed limited edition photographs from the series), as a valuable sponsor your name will be in the credits of the film with the special thanx, furthermore you will receive some surprise artistic limited edition gifts and VIP invitations to various performances and events, with the possibility to have dinner and drinks with the artists and much more. Thank you for your time and generosity, your  valuable contribution and support! Domo arigato gozaimasu!

A password link to the video and photos online of making of "Sakura Dream" and the edited episode of "Sakura Dream", a digital version of the artist book "Invitation Now-Here" , signed series of postcards of the original artwork by the artist will be send to you with the thank you letter in a special envelope

A password link to the video and photos online of making of "Sakura Dream" with an ability to participate in the voting on the artistic decisions, and the edited episode of "Sakura Dream", a printed version of the artist book "Invitation Now-Here", signed series of postcards of the original artwork by the artist + a surprise "Re-United Now-here"ietem will be send to you with the thank you letter in a special envelope

Collector's package: all of the above +a signed limited edition surprise item of "Re-United Now-Here" and one of prints of the artworks (signed limited edition A4 photograph of your choice from the offered selection) will be send to you with the thank you letter in a special envelope + 2 invitations to one of the performances by "Re-United Now-Here"

A silver collector's package: a collector's package with and one of prints of the artworks (signed limited edition A3 photograph of your choice from the offered selection) and a signed, limited edition of the artist book "Invitation Now-Here" will be send to you with the thank you letter in a special envelope + 2 VIP invitations to the next edition of the Sound& Butoh Night in Amsterdam

Golden package: A silver collector's package: a collector's package with and a triptic of the artwork (3 signed limited edition A3 photographs of your choice from the offered selection) will be send to you with the thank you letter in a special envelope + 2 invitations to the performance in Kyoto +2 VIP invitations to the next edition of the Sound& Butoh Night in Amsterdam

A golden collector's package + an invitation to the artist dinner in one of the cities of your choice (Amsterdam, Paris, Berlin or Tokyo) + a surprise gift by the artist

A very exclusive membership for a general sponsor - with various awards throughout the year, VIP invitations to the performance events, artistic dinners, a possibility to choose the newest works for your private collection, and much much more