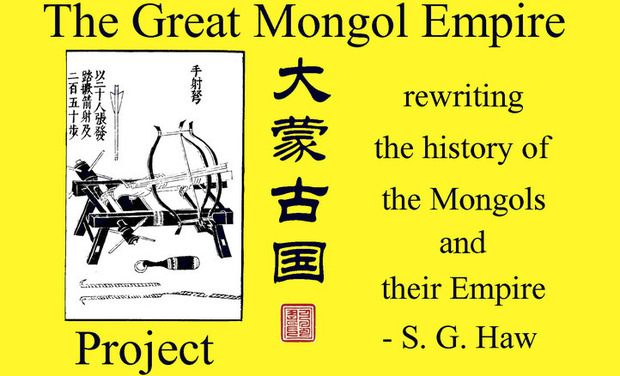 <p> <img alt="Arbalest1" src="https://kkbb-production.s3.amazonaws.com/uploads/project_image/image/9224/Arbalest1.jpg"></p> <p>  </p> <p> During the first sixty years of the thirteenth century, Chinggis Khan and his successors swept across Eurasia, creating the largest contiguous land empire that has ever existed. The entire history of the world was deeply affected by the Mongol conquests. Yet this period of history has been very poorly understood. Much that has been written about the Mongols, their conquests and their empire is seriously inaccurate, and quite often just plain wrong. A thorough reassessment of the history of the Great Mongol Empire – <em>Yeke Mongghol Ulus</em>- is needed. This project aims to produce a much more accurate account of the history of Eurasia at the time of the Mongol conquests.</p> <p>  </p> <p> The project is already well under way, and has already produced important results. Half a dozen articles have been written; four will be published during the next few months. They include complete reassessments of the role of gunpowder weapons in the Mongol conquests, of the reasons for the Mongol withdrawal from Europe in 1241, and of the Mongol conquest of Tibet. These articles have been accepted for publication in major academic journals such as the <em>Journal of the Royal Asiatic Society</em>, the <em>Bulletin of the School of Oriental and African Studies</em>, and the <em>Journal of Chinese Military History</em>. But there is still much more to be done! Another article is already close to completion, and several more are planned.</p> <p>  </p> <p> Up to now, all the research and the work necessary to produce these writings has been entirely funded by myself personally. I have spent a substantial amount of money on acquiring books and periodicals needed for research. I have devoted hundreds of hours of time to research, and to writing up the results of the research. It has come to the point now where I cannot personally provide sufficient funding for all the necessary work, the travel to research libraries, the acquisition of research materials, the time spent writing, and so on. It is my plan now to found an institute to carry on my work and take it further – but this is very much for the future. What I need immediately, and am seeking now, is sufficient funding to allow me to research and write another article, without having to worry about where the funding will come from. I am an independent scholar, not attached to any university or other institution. There is no payment for articles published in academic journals.</p> <p>  </p> <p> I became deeply interested in the Mongols and their empire about ten years ago now, when I was working on my book about Marco Polo. This was published by Routledge in 2006 as <em>Marco Polo’s China: a Venetian in the realm of Khubilai Khan</em>, and was favourably reviewed in several academic journals. Professor Peter Jackson, author of <em>The Mongols and the West</em>, concluded that I had “produced an extremely valuable and ground-breaking work, which must surely now have settled the controversy surrounding the historicity of Polo's visit to China”. It is my aim to continue to produce more such ground-breaking work.</p> <p>  </p> <p> The funds I am now seeking will be used for the production of an article on the origins of the Mongols, and their activities, way of life, migrations and relations with other peoples, up to the time of Chinggis Khan. For all those who make any contribution, however small, I promise to use my best influence with Chinggis Khan and his successors, to ensure that no Mongol horde descends upon your neighbourhood, rapes your womenfolk, carries some of you off into slavery, and massacres the rest! For those contributing a small sum, there will be a signed letter of thanks, with a copy of the Project Information Sheet, giving details of work in progress and publications that have already appeared or are in press, with abstracts. For a slightly larger donation, the reward will be a copy of the Project Information Sheet, plus a printed copy of one of my articles, signed and with an inscription expressing gratitude (this may be any one of the articles that have already resulted, and in future may result, from this project. Academic publishing can be very slow – one of my articles was accepted for publication two years ago, and is now expected to be published in April this year – so, to prevent a long wait, you may receive an article that has already been written, rather than the one you help to fund). Those contributing more will receive copies of more than one article. All those who make a substantial contribution will be acknowledged in print when the work they have helped to fund is published, and will also, of course, receive a signed copy. Above all, all those who contribute will have the great satisfaction of knowing that they have helped to deepen the understanding of history and to widen our knowledge of our past.</p> <p>  </p> <p> <em>The illustration in the Project poster shows a Chinese arbalest, or great crossbow, of the kind used by Chinese troops fighting for the Mongols. These arbalests could fire rocket-assisted arrows, to a distance of about two miles. The arrows sometimes carried incendiary or explosive charges.</em></p>

<p> Articles published in academic journals do not produce any income. I am not affiliated to any institution. This gives me a great deal of freedom, to research what I like, and to write what I like, but it means that I have no salary. It takes a great deal of time to research and write articles. It can also cost a certain amount of money, for obtaining copies of articles and books, or for visits to research libraries. I have a large personal library, but it is not completely comprehensive! Whatever money I raise will be used to allow me to devote more time to research and writing in connection with this project, or to obtaining rresearch materials. If I raise more than the basic amount, all the money will be put to good use, in relation to the project.</p>