Let's Trade A Hand For A Heart ! - Invest in our project and get a unique piece of art in return. 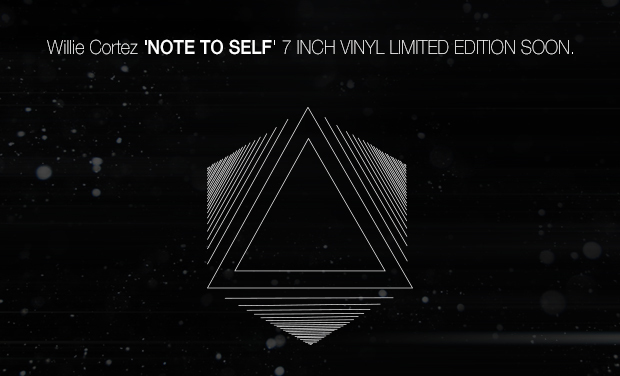 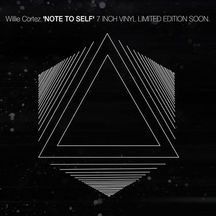 ★ WHO IS WILLIE CORTEZ ?

Willie is a Paris based singer / songwriter / producer and film score composer.

His debut album named FARSUCT (Delabel / EMI Music), which can be described as 'Future Funk', was released in january 2004 to critical acclaim. Things took a turn in 2006 when he founded 'Seppuku Paradigm'  with Alex Cortés. The pair went on to score four full feature films (Pascal Laugier's MARTYRS amongst others). In 2010 he won the 'best original soundtrack' award at Sitges International Fantastic Film Festival,  which he shared with his brother Alex, for their work on 'RED NIGHTS' a french / hong-kong production,  directed by Laurent Courtiaud & Julien Carbon.

Today, ten years after FARSUCT, Willie is back to his first love with a new set of songs he wrote, composed, produced and performed as a solo act. One of these new songs 'Note To Self' will be given as a reward to Kiss Bankers exclusively in the form of a 7 inch limited edition vinyl disc.

On stage he is joined by 'Babyshambles' original guitarist Patrick Walden and dancer Emilie Camacho  who has worked with artists such as 'Stromae' ('Papaoutai' music video).

For this very special occasion we are releasing the song 'NOTE TO SELF' on a 7 inch vinyl.

☛ The 150 record sleeves are all unique and different.Put together they form ONE complete piece of art (stylized stencil anatomical heart).

There will be no other release of this song digital or otherwise until the full OMNIA DIMITTENTUR record release.

★ THE LIVE BAND LINE-UP (click on name for bio):

★ WILLIE CORTEZ - OMNIA DIMITTENTUR - THE STORY BEHIND IT:

On the night of April 20, 2014, I stepped out the door of the red brick desacralized church known as Greenmount Recording Studios in Leeds, UK, carrying with me the definitive mixes of my newest and most personal work to date.

The carefully picked six songs I had been working on for a while, alone in my underground recording studio in the 20th arrondissement of Paris, turned into a full fledged record that week, with the help of Lee Smith and Jamie Lockhart, who poured their hearts into it and mixed until their 1970's MCI console literally caught fire. The NME journalist who was on the premises that day can testify to that.

We had a record... from feelings to thoughts to words to sound. Crystallized.

And now itʼs here... Master tapes on a table and Iʼm staring at them. Whatʼs next? Makes you want to stop and look back for a minute.

I have come a long way since my debut album got released ten years ago under the auspices of the late EMI Records.

It’s been a long and rough ride albeit interesting and mind-bending. I have learned... a lot. I have grown up. Both on a deep, personal level and musically. All of which is intertwined anyway. Ten years.

Three thousand six hundred and fifty two point forty two days of which there were good ones filled with laughter and hope... Life though, as we all should know, is like a roller coaster ride.

Fall of 2011. A bad week turned into a bad month, which grew into an even worse couple of years.

Shit really hit the fan and I found myself standing at the edge of the cliff. Dizzy from pain, feeling crazy, lost and abandoned.

Either you die inside or you wake up to whatever lays at the bottom of your soul to illuminate the path and slowly find your way back home.

So I started writing again, but in a different way this time. Not for anyone to hear. No message. No purpose. No plan. Just write. Do not think. Just listen to the music... and sing.

How these songs ended up track by track on Lee and Jamie’s mixing console in Leeds I am not even entirely sure of.

Time is a healer they say.

I carried my cross. I forgave myself for the things I did wrong. I turned negative into positive.

Writing, performing, recording and producing everything on my own, often using unconventional techniques, it was a sleep deprived and on the verge of a massive burnout, almost translucent shape that knocked on Lee Smith’s door in Armley, Leeds, that fateful day.

I introduced myself. We exchanged a few words about the songs to be mixed. Then just talked about Life.

I told him I wanted to name the record ‘OMNIA DIMITTENTUR’ which is Latin for ‘All Is Forgiven’.

★ Why we need your help:

This is a self funded project.Everything has been done through hard work and with passion.

We've already put a lot into recording and mixing the songs the proper analogue way...and it does sound like it. A 6 song EP is finished and music videos are on their way.The live show is 70% ready.

Our aim is to do it all the proper way, so we can deliver something that is of the greatest quality possible given our means.We have assembled a team of very skilled and professional people: graphic artists, mixing engineers, film directors, photographers, web masters etc...who all are willing to help us BECAUSE THEY BELIEVE IN THE PROJECT.And this is great.This is the beginning of a new story.We feel blessed.

But some things come at a cost.

We've managed so far by using our own savings and by getting help from talented friends and connections.But today we need to move swiftly and take the music on the road.We're almost there.

Now, if you enjoy our music and would like to hear / see some more...YOU can help us reach that point where we'll be playing gigs in your town...By investing some of your hard earned pennies you will do a great deal in advancing our project to the stage where it needs to be now.

As a bonus reward you will get the song 'NOTE TO SELF' on a 7 inch vinyl.

★ Your money will go into covering these costs:

➮ Vinyl mastering of 'Note To Self' at Stardelta Mastering.

Our Infinite Gratitude for contributing to the project.

Our infinite gratitude and we will give away a signed copy of Seppuku Paradigm's 'Unedited/Unreviewed' EP - CD Digipack - This is the very first and only non-film music record by Seppuku Paradigm, an ongoing side project I founded in 2005 with my brother Alex. The 6 song EP comes in a beautifully designed digipack. Actress / Director Asia Argento liked it so much she sent us a poem as a 'thank you'...

1x Limited Edition (150) 7 inch Vinyl (stencil painted cover artwork / signed / numbered by hand) of the song 'NOTE TO SELF'. The 150 vinyl sleeves are all unique and different.Put together they form ONE complete piece of art.

I will write a song about / for someone you love, record it and have it pressed on a single unique piece of vinyl for you.For this to be done the right way I will get in touch with you so we can discuss all details.