Contribute to the production of the 2nd album of Beat Bouet Trio. COMING OUT 1st APRIL 2017, BUT HERE, you'll have it especially for XMAS !!! 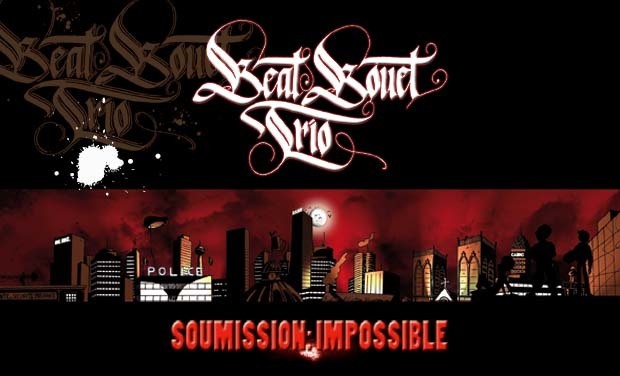 But what are these guys, who animate balls and fest-noz since a little more than three years? By far, that looks like rap or has ragga, in the style of what was done in the 90 ' S. And when we check it out, Hey! it is really rap and ragga… with people who swing on Breton dances and Bal Folk ones. Yeahh !

With Vanao on accordion, T-Burt on human beatbox and Faya Gur on voice. Born in Brittany in 2012, BBTeam made these first "weapons" in Festoù-noz of Brittany. They know themselves for a long time, being all originating in the same corner, in the countryside of Ploermel (Brittany). On several moments of their life, they had the occasion to play together, with groups like IMG or Shebeen but especially within the "Battle d'Avant-Deux" in Rennes. It is in one evening, at the time of an experiment between breton trad song and human beatbox that the idea to assemble a group of fest-noz/Hip-hop comes out (or the night rather).

From small evenings underground to large festivals, the Breton hip-hop style makes its way and quickly the diary fills and brings us to the four corners of Brittany.

In 2016, the things take another turning. Boombal festival, invites us in Belgium in August 2015. This weekend was marked by two important meetings : with the Portuguese female singer  Fabiola Augusta “Fabs”, and the other electric meeting was with the audience and dancers of Europeans Bal Folk.

With Fabs, after a featuring in free style at the Boombal, we decided to record a few pieces with her. These pieces are on the second album.

With the Bal Folk audience, the band starts to play on the 4 corners of Europe, Netherlands, Occitanie, Switzerland, Poland and soon Portugal and Italy. We love it !!!

THE OBJECT     This second album is the fruit of this meeting with audience, dancers and artists from Bals Folk, marked by the arrival of pieces like Polska, Mazurka. But be reassured, we don't give up our native Upper-Brittany, breton circles and avant-deux are always quite present.

We called it SOUMISSION IMPOSSIBLE (understand it as OBEDIENCE : IMPOSSIBLE, but with a french word game) in reference to the disturbed context of these times and like a challenge thrown to the face of the fascistic and imperialist reactionaries who lead us or seek to do it. The band is engaged and the production remains local and independent.

You will can safely appreciate 16 tracks with pieces expected like the mazurka “A l'armée”, the featuring with Fabs, “Ganjah Smokahs” or “ça Dégénère”. All the recordings are certified AB (Accordéon/Bouche) ((a word game again : AB means Organic Food, and correspond to Accordéon and Mouth (bouche) )) because we did not use any synthetic samples, as we are accustomed to doing it.     But there is not only Sound because we also like very much the Action Movies and Cartoons. Then we slipped, drawn inside the object, a short story in the Black&White Comics style. The malicious ones are the same one as those of our texts and the heroes win at the end (sorry we spoiled it !) ;)     So we are releasing at the same time a new album, and a mini comic inside.

Then it is very simple

The collection that we launch, corresponds very precisely to the amount of the estimate for the pressing of the album and the mastering : 2562€.

If we exceeds the amount envisaged of the collection,  that will be really really cool! As a result there will be a little margin to make our new videoclip. Because between us, 2000€ for the clip it is much money to come out .

The next videoclip will be a continuity of our work around the album (even universe).     If 3500€ were reached, that would be really well, one will be able to pay the commission of KKBB and to add a little margin to the financing of the clip.

The global budget arises as follows:

A big thank to you. The most important is a gift for free ;-)

The classic: the order of the album. 1 album delivered before Christmas

For you and a loved one, two albums. 2 album delivered before Christmas

And Grandma, you've thought about your grandma? And it's almost Christmas So for you + a loved one + your grandma pack 3 albums !!! Delivered before Christmas

That's for people who support the crew at 200% (or that have money). Two albums + two tikets for the Album' party+special dedication the day of party

An album + a particular workshop of half a day with the musician of your choice. You can choose the instrument: -Accordion -Sing -Human Beat Box -Guitar -Comics You may be more but not more than 4. Remember to specify in your order what you want as an instrument.

Ladies and Gentlemen. There will be only one of you who will be entitled to this special offer. 1ALBUM + 1 private gig at hom home. we bring the sound system, you plan Rum. Ideal for grandma's birthday. Contact us quickly to stall the date. It would be possible only in west of France (sorry for the others)