Help us finance the release of Balval's third album! 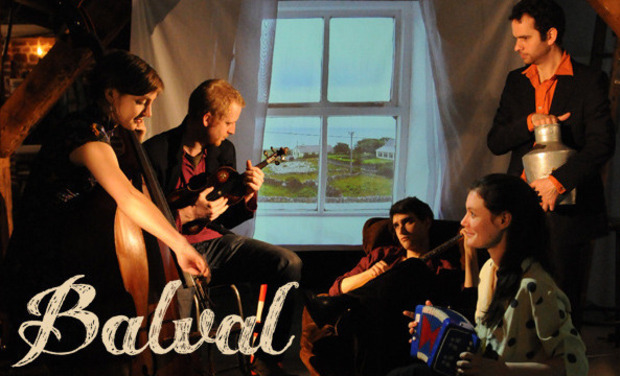 Balval’s adventures began a few years back, and have since spanned two albums, (Blizzard Bohème 2007, Le Ciel Tout Nu 2010), and several tours of France, Europe and the USA.

Balval’s musical journey has recently taken us furher away from our Eastern European Gypsy Roots, and towards what could only be defined as a Rock-Pop-Folk- World (try saying that fast..) kind of sound.

And we saw that it was good.

So, loading up on bare necessesities only, and accompanied by the incomparable Elise Boisseau (carrying ten mic stands under one arm and a recording console under the other) we headed towards the Bourgogne village of St. Brancher (pop. 60, including Roger whom we wish to thank heartily for the lawn mower and sugar).

There, during a week of summer 2012 we shook the ancient walls of an old farmhouse, recording 11 rockin’ new songs.

So here we are today, with a beautiful, organic , home baked new album, asking nothing more than to unleash our new music on the unsuspecting ears of the world, and we intend to do just that- With a little help from our friends, that is.

That’s where you come in.

The new album’s release is programmed for October 2013.

By pre-ordering our album in digital or physical format, or making a larger contribution, you will help us cover the remaining expenses ;

If our collection exceeds 3200€, the rest of the money will be used for the preparation and promotion of our album release party ! And, perhaps for pressing a few Vinyl copies… (all right !)

Dear friends of Balval around the world, we are counting on your support !

Thanks ! And we hope to see you soon

The album in digital format.

The album in physical format mailed to you.

The autographed album mailed to you.

Two autographed albums mailed to you.

The complete Balval discography (3 albums) mailed to you.

The complete Balval discography (3 albums) mailed to you + your name on the thank you list of the album.

The complete Balval discography (3 albums) mailed to you + your name on the thank you list of the album + a special thank you video from Balval...