Waterloo is not lost! France, England and Germany all make good sparkling wines in 2015. These are the weapons for this peaceful battle. 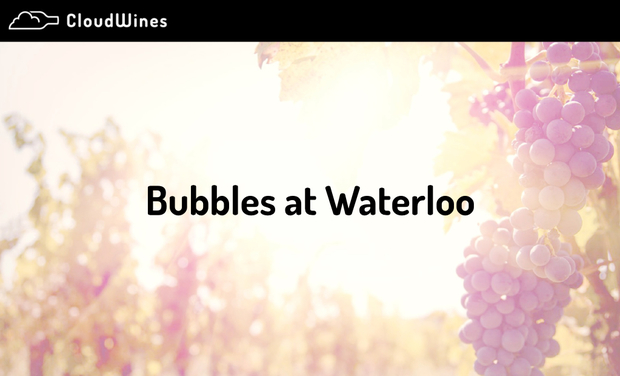 CloudWines, based in Paris, was founded by David Cobbold Alexander Keiller and Sébastien Durand-Viel. David and Sébastien have over 50 years of collective experience in the industry and are  tasters, broadcasters, consultants and WSET programme teachers. They have authored numerous books and articles on wine. www.cloudwines.fr

England saw the birth of sparkling wine from Champagne in the 17th century, some 50 years before France, due to a combination of social, economic and technical factors.

And Great Britain is still Champagne's no 1 export market. Germany, through its merchants, bankers and technicians, not to mention its cultural taste for anything containing bubbles, also played a major role in the development of Champagne and its sales. It would therefore be fair to say that

If Britain and various German states that existed at that time united their forces to finally defeat Napoleon at Waterloo, 200 years ago, I am quite certain that Champagne and other sparkling wines have done far more for humanity than any war.

And the love of sparkling wines is something that unites the three nations. So why not replay this battle, symbolically and peacefully, via a selection of the top sparklers from each country?

Not only would the event be fun, it would also highlight how climate change and modern viticultural techniques have impacted the quality of sparkling wines across these countries.

Firstly, there should be equal numbers on each side. We shall aim for 12 from each country, plus one from Belgium.

Given that sparkling Champagne existed and was widely renowned in 1815, as indeed were several Grandes Marques that still operate today, Champagne will defend the French colours with brands who have this historical status.

English sparkling wine is a more recent affair and the contenders are far less numerous. But their current impetus should enable them to field a decent team.

On the other side if the Rhine, Germany is now the biggest producer (and drinker) of sparkling wines in the world, even if its sparkling wines are hardly known outside of its borders. The rise in quality of the best "Deutsche Sekts" and "méthode traditionnel" should provide them with sufficient munitions however.

And we cannot forget Belgium, as this country supplied troops on each side of the battle! There will therefore also be a sparkling Belgian wine that will be playing at home.

We have the following sparkling wines confirmed (more to come):

The tasting will be conducted professionally and will be blind. Each country's wines will be tasted in separate flights. It will take place on the site of the battle, in November 2015, in a place that will remain secret until after the event. The Belgian wine magazine In Vino Veritas is associated with this event and will provide logistical backup.

to help us cover the following costs:

Travel for the judges to Waterloo from European destinations - 1,800 euros

A gala dinner where the results will be revealed - 2,100

In addition, we will be producing an e-book of the event. All the judges are also wine writers and each will be invited to write a chapter from the perspective of the country they are representing. The e-book will also contain a preface that will  provide the historical context of the battle itself. A unique and fascinating account!

We do need financial help to get this off the ground and make this work - this is where you come in...

Wine is about community, about mutual enjoyment, and we want to include you in enjoying the fruits of Bubbles at Waterloo (pun intended).

We have numerous perks that we are offering, some of which will allow you to judge for yourselves the qualities of sparkling wines from the represented countries. If you are at all interested in sparkling wines and would like to get an opportunity to taste wines side by side from England, France and Germany (and why not, Belgium?), this is for you!

And for a limited number of you, we have the "all in" perk where you get to meet the judges and discuss the event over a gourmet dinner accompanied by (of course!) sparkling wine. The perk includes travel to Waterloo (from a European destination), accomodation in a boutique hotel, as well as bottles of sparkling wine and other perks!

Please note that delivery is only to European destinations.

You can also help by spreading the word to like-minded friends and associates, or if you don't like wine at all, you could still offer it as a gift to someone who does!

Gushing thanks on Facebook with your name written in bubbles!

T-shirt Designed by the same team that designed our site, you're guaranteed to look good! Money back if you don't like the designs that we'll submit to you. + Facebook thanks.

Your name in the E-Book. All the judges are also wine writers and each will be invited to write a chapter from the perspective of the country they are representing. The e-book will also contain a preface that will provide the historical context of the battle itself. A unique and fascinating account! + Facebook thanks.

Sparkling wine tasting. Taking place in Paris, this tasting hosted by David Cobbold will allow you to savour the two best sparkling wines from each country. Full explanations about the event and the choice of the winners will be revealed by David. Not to be missed! + Facebook thanks and T-shirt.

The winning wine! A bottle of the winning wine selected by the judges. Will it be French, German or English? Or Belgian!? European delivery included. + Facebook thanks and E-Book.

The winning 3! Mixed case of 3 bottles of best wine from each country - one French, one German and one English. If the Belgians win, we'll throw in a 4th bottle! European delivery included. + Facebook thanks + E-Book and Bubble Cork

Doubling the 3! Doubling up on the previous perk. And again, if the Belgians manage to convince the judges, we'll throw in a couple of extra bottles! European delivery included. + Facebook thanks + E-Book + Bubble Cork and T-shirt

The All in! +Facebook thanks + T-shirt + E-Book + Bubble Cork + Double the 3! This is where it gets serious. An invitation for two to come and join us and meet the judges, discuss the event over a gourmet dinner accompanied by (of course!) sparkling wine. The perk includes travel to Waterloo (from a European destination), accomodation in a boutique hotel for one night and all the extra perks listed above. A once in a lifetime experience! +Facebook thanks + T-shirt + E-Book + Bubble Cork + Doubling the 3!