Contre-Attaque is a football board game played with cards in which you will take the place of a manager looking for victories and titles. 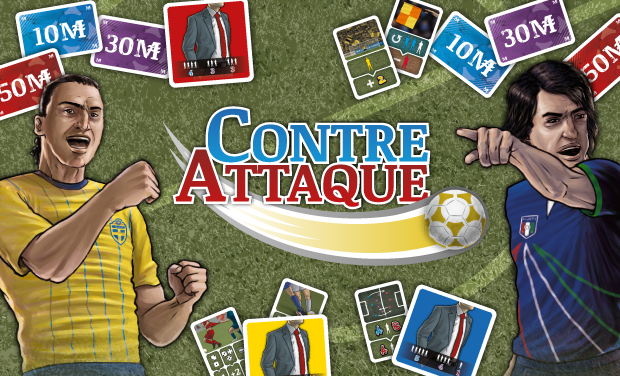 - Cédric is the experience: he is one of the authors of the game Jack Bananas, enjoyed by hundreds of people, and is an experimented player.

- Gregory is the artist: he’s in charge of the cards’ drawings and shares his ideas in terms of ergonomics.

- Loïc is the imagination: he rephrases the rules, finds new ones, and makes sure that everything stays coherent.

- Emilien is the organizer: he had the idea from the start and his main mission is to coordinate the different tasks.

If you want to contact us or if you have any questions, please write to contreattaquelejeu@gmail.com

If we don't reach the expected amount: your investment will of course be completely repaid with thanks to have believed in this project with us.

The game was selected amongst the 30 firsts of the Boulogne-Billancourt international challenge of boardgame creation.

Contre-Attaque is a deck of cards for 2 to 4 players where you play the role of a manager in search of victories and rewards. Buy football stars, choose the best training, manage your game and score goals in order to beat the other teams. A game lasts 30 to 45 minutes and is within the reach of 8 years old and more.

Contre-Attaque is a football team management game. Become a team manager, recruit stars during the mercato when the season begins. Be careful! Other managers may want the same stars as you do and try to ruin your purchase. Confront your opponents during thrilling games. Define a tactic that includes your stars, look for the strengths and weaknesses of your opponents and materialize your actions into goals. Be surprising thanks to actions performed during your training sessions, the cheering of your supporters or vicious low blows. Even if cunning managers are successful during the mercato, subtle tacticians may be the real winners during confrontations!

The cards "stars" are the main assets of your team. Each star has a talent (between 2 and 5) and a number of balls (that stands for its number of activation during a football match). During a scoring opportunity, the manager can activate his stars and then take profit of their talent. If a star doesn’t have any ball left when an opportunity comes up, that means that he is too exhausted to play.

Experimented free-kicks specialists are symbolised by a logo that can be seen near the drawing. When the referee awards a free-kick they can try to score.

Goal keepers are treated differently and are never tired. Of course, their talent is an asset for the defense but they are not always able to stop a shot.

At the start of the game, each manager receives 7 cards "Position" (1.2.3.3.4.4.5). They stand for the number of soccer players lined up on a row (defenders, midfields, forwards).

The cards "Opportunities" are both-sided cards. According to the result of the opportunity, the striker puts down either a card with a side “goal” or “missed chance”. That is also a reminder of the number of turns during a game, and the result at the end of it.

The cards "Millions" stand for the currency used in the game.

Each manager receives 4 cards "Highlights" of his colour. They symbolise the team’s supporters. He can then buy extra cards “Highlights” at the start of the season.

- 28 cards Position (that allow you to set your tactic)

Preview of the game

How the game works

For the sake of reducing our environmental footprint and use quality materials, our  game will be produced in Europe, at Ludofact, a german manufacturer. The deck will be delivered in a nice box of 189*136*65mm with nearly 200 cards, counters, wooden cubes and a dice. Manufacturing will start this summer in order to forward the game in October.

KissKissBankBank is a crowdfunding website but we would like to get more than the money: each contributor that will pay at least 10€ will gain the right to vote for soccer players that are not yet in the deck of cards.

If we overcome the expected amount:

If we don't reach the expected amount: your investment will of course be completely repaid with thanks to have believed in this project with us.