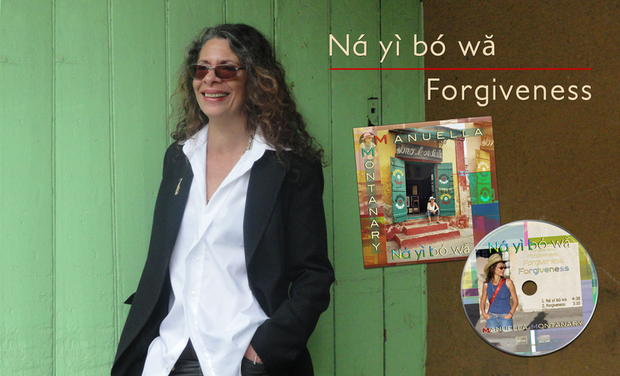 These two tracks are born from a desire of playing music again with my family. I wrote the lyrics on my cousin Alioune Agbo’s music, former guitarist of Miriam Makeba; we played on stage together in Abidjan… in the Eighties. Luc Montanary, also my cousin, played a clever and delicate bass. Dona Myrette, another cousin, and Julie Pierquet, my daughter, put their soft, sensitive and warm voices on the backing vocals.

The second, “Forgiveness”, is in English. In my quest for forgiveness, I have reached this conclusion: “Love is forgiveness”, and I have put it into words.

Recording was made at home and Alioune Agbo with his expert’s ear did wonders! Raoul Agbo, guitarist, singer and… of course cousin, realized the mastering.

A family venture, which I’m in a hurry to have discovered by as many people as possible, and promote among professionals to whom, obviously, I must send this beautiful project (sample CD) for free!

This sum is necessary in order to complement the financing of my first CD whose launch is scheduled in November 2014.

Why two tracks only? Because a smaller recording is most appropriate for the professionals prospecting.

Recording, mixe, mastering and design are already made.

If your generosity goes beyond, the money collected on top of this sum, it will finance a first clip and possibly allow the recording of other songs!

I trust you to make this project known and to spread the word around you.

Very big THANKS for YOUR support!

For this modest cost, you will receive the 2 songs (mp3) in your mailbox + a very big thanks!

You will receive the CD at home (shipping cost included in Europe) + the 2 songs (mp3) in your mailbox + a very big thanks!

You will receive the booklet with lyrics, photos, bio… + the CD at home (shipping cost included in Europe) + the 2 songs (mp3) in your mailbox + a very big thanks!

One invitation to the upcoming concert + all previous rewards + a very big thanks!

An invitation to the showcase (cocktail included) for the launch of the CD with all the musicians + all previous rewards + a very big thanks!