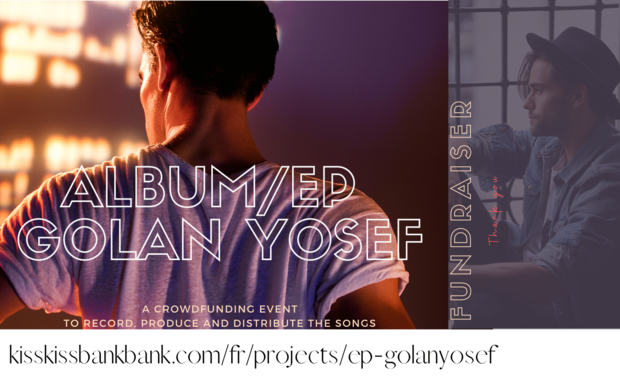 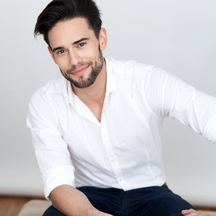 To support a part of the production of my first EP and the music video for Girl You’re Free, the single that was released on June 6th 2020. For these final steps and to get you an album you deserve I need your support.

“After many years performing in ballet companies around the world, singing in some of the biggest musical productions of France or known from his role Joaquin in Disney’s Cheetah Girls 2, now Golan Yosef brings out his first album." Patrick Jaquin, journalist at France 3 Televisions

With songs in English, French and Hebrew, it has a multi cultural “Folk-Pop sound”. I always try to create something positive, with hope, but sometimes there is some nostalgia as well.

Everything has been auto-produced; the production of the single, mastering, album design, co-writing process in two of the songs and the charity concert in Paris.

If you decide to be part of this and join our project, I believe together we can create something.

“Girl You’re Free” talks about a woman’s freedom; Freedom to love freely, to live her dreams and to say out loud what she feels or suddenly leave on that trip she always dreamed of.

A strong and important message to bring, cause there still are oppressed woman today, even right here in France. We live in a time, especially now, where we all need to feel free a little.

With this music video I want to reach as many people as possible and hopefully brighten their day, who knows even change something in their way of thinking about love and woman. The music video will be shot with local artists in Paris.

I was born in a mixed family with roots in Israel, Holland and Spain. With my family I grew up in a multi-cultural neighborhood in Amsterdam, where apart from from the modern music genres that I heard on the radio, there was a lot of alternative music around me; African music to European folklore, Israeli to Latin and even some Dutch songs.

At home while listening to my moms cd’s I discovered other bands; The Beatles, Paul Simon, Prince, Sting, Jacques Brel and The Rolling Stones etc yet I’ve listened to a lot of hip hop as well.

My first “musical obsession” was Michael Jackson and that’s also one of the reasons why I started dancing.

"Amsterdam in1994, at the National Ballet Academy"

When I still traveled the world as a dancer, my guitar always came along. At the age of 17 I moved to Barcelona to dance at my first professional dance company and would later live in Marseille and New York.

Every time I found myself in a new country, with a new language and a new culture. Though it could be lonely at times with often little to spend, it was an amazing experience in which I met wonderful people along the road.

I started writing down my happenings, then feelings, later poems, that became stories and finally songs.

The experience as a performing artist had been beautiful and enriching but I felt the need to say something and hopefully have a modest yet positive impact on the world.

It has now been five years that I’ve been working on this album, developing the melodies and the lyrics into songs. Everything has been auto financed and I’m lucky and very grateful, to have people around me that help me with this project and make it advance.

For a year I studied musical writing&composition at the musical department of l’AID in Paris, where I started writing some of the songs in this album.

At the studio des Variétés in Paris I met composer and songwriter Manuel Larrouy. Together we worked a lot on developing the melodies and the text, while I could further define my style and bring structure to the songs.

At the studio I’ve met a lot of other artists and professional people from the music industry, which has really helped me and enriched my experience there. “Girl You’re Free” is arranged by Manuel and I hope we'll be working together again soon. He has a band called “TömTom, the band", an indie/folk group. He has written songs/albums for many successful artists in the French music scene.

The next two songs will be arranged by Damien Silvert. We’ve worked together on several occasions and he knows me and my work very well. He has his own recording studio and has produced songs for several established artists and I know he can bring out the true nature of the songs. He is also vocal coach in The Voice France and has worked in musical productions all over the world.

A place dedicated to artists in the modern music scene, "le SDV" offers ways to perfect, further develop, to teach, to create and meet other professional artists.

Helping artists to produce their creative projects in a wide spectre of areas: writing, composition, interpretation, visual and audio production.

Thanks to everybody that supports me already. Anyone that believes in this project, likes the songs and decides to donate, thank you. I’m very grateful because without you this wouldn’t exist.

So thank you and I hope we can make those last steps together and bring the music to you.

Feel free to ask me any questions or details about the project.

What if we reach the goal? We will celebrate! I would like to invite all the participants and contributors to this project the next day, either in Paris or Paris region!

so keep your evening free, July 13th here we come

Keep believing because everything is possible

How will we use the budget?

The budget will be used for the music video of Girl You’re Free. The artists/actors, the editing, the camera and director.

The recording and arranging of the last two songs (out of five) that appear on the Ep. There’s a percentage that goes to KisskissBankbank and a part meant for shipping and promoting the EP.

WHAT IF WE COLLECT MORE THEN THE INITIAL BUDGET?

Today I'm already working on the second and even a third LP! It would then be possible to record more songs, which would be totally amazing, you never know, surprises actually happen!

After the first LP I'd love to organize a concert tour with a couple of musiciens. This would make it possible

Fingers crossed, let's ask the universe for some help

Thank you mention on Twitter to all the participants

Thank you note on Twitter that thanks all the participants, All the bits help also the small one's :-) Thank You!

A more personal signed photo to your name, thank you on your facebook wall :-)

A photo signed to you, with a little thought or text, & personal thank you on your facebook wall! :-) also the LP digital on your email

A personal signed photo and the LP by email!

A photo signed to you, with a little thought or text, & personal thank you on your facebook wall! :-)

personal video to you, just to thank you for your support and encouragement! :-)

Video message from me to you :-) and the LP digitally you your email!

The new cd of the single "Girl You're Free" by Golan Yosef, and the LP by email ❤️

T-Shirt "Girl You're Free by Golan Yosef" made of 100% organic cotton, a signed photo and video call on facebook messenger to thank you. the LP in your emailbox

2 acoustic songs on zoom just for you

I'll sing two of my songs, please do let me know if you have a favourite one! The LP in your emailbox!

Live zoom with 5 of my songs, T-shirt, and cd

Live on zoom I'll sing just for you, 5 of my songs on the guitar and you'll get a T-shirt and the CD! :-) also the LP in your email

Vinyl of "Girl You're Free", T-shirt and 3 songs on zoom just for you

The Vinyl of the single in it's pochette, the t-shirt and I'll sing three songs just for you on zoom. Can't wait to sing for you guys! LP in your email 🥳❤️

private concert for you and your friends (Paris Region)

private concert in or close to Paris in a hall, for you and your friends Covid restrictions have to be respected 🙃 LP by email 🥳🥳