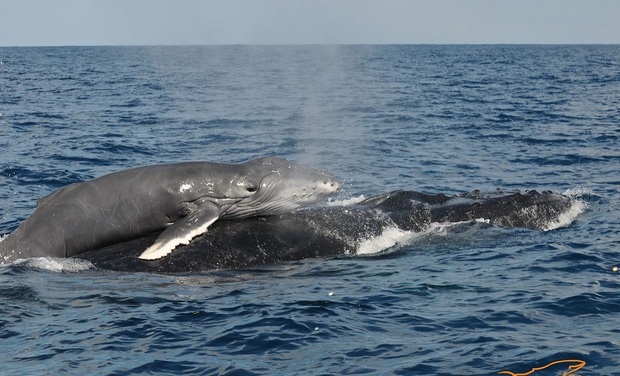 My name is Maevatiana Ratsimbazafindranahaka (Just Maeva!). Since I was a child, I have always been fascinated by the animal kingdom and especially the world of whales. Driven by passion, I oriented my studies towards the understanding of animal behavior and animal conservation.

Graduated from the University of Antananarivo, Madagascar, I hold a Bachelor's degree in Organism and Ecosystem Biology and a Master's degree in Animal Conservation Biology. During my Master's degree, my desire to work on whales was particularly reinforced as I had the opportunity to conduct my own study on humpback whale calf. This experience made me realize that although the humpback whale is a very popular species, very little is known about its life at birth and during the early stages of its life. In order to dig further in this direction, I started a research project focusing on mother-calf interactions in this species. This project is part of a joint thesis between the Paris-Saclay University and the University of Antananarivo. Motivated, I am convinced that this new adventure will allow me to bring new knowledge that can be used, among other things, to guide the implementation of conservation and protection measures for the species.

A project about humpback whales? Calves? Why?

The humpback whale is a mythical animal! It is a highly migratory marine species. It spends most of the summer in the polar areas to feed. In winter, it migrates to warm tropical waters to mate and give birth. During this period, it does not feed at all!

Being a very demonstrative animal, the humpback whale attracts many tourists through the flourishing activity of whale watching. Therefore, it plays an important role in ecotourism.

The spectacular acrobatics they perform are particularly appreciated!

But the role of the humpback whale does not stop there. It is a useful species in many ways. At different stages of its life, the humpback whale act as a nutrient pump. This contribution is essential for the proper functioning of the food chain and marine ecosystems. As they are found in all oceans, humpback whales are among the sentinels of the marine environments’ health. A decline or increase in their population often indicates a change in the marine ecosystem. Also, in the fight against climate change, its contribution is not negligible. Throughout its life, it sequesters tons and tons of carbon!

Although the species is now classified as Least Concern (LC) according to the International Union for Conservation of Nature (IUCN), careful attention must be paid to it. Indeed, with the increase of human activities along the coast and offshore, marine life is increasingly threatened by ship collisions, entanglement in fishing gear, noise pollution. In order to reduce these human impacts on them and ensure their conservation, in-depth studies of their communication, life history and habitats are necessary; the idea being to know them better in order to better protect them.

One of the key points in this framework is the young, i.e. the calves. This category is indeed one of the most sensitive and vulnerable to human disturbance. At birth, a calf is ONLY 4-m long for a weight of 700 kg! Fragile and vulnerable, its survival depends entirely on its mother during the first months of its life. Its protection, feeding, and learning are all provided by its mother. Due to these particular needs for its growth, even short-term disturbances, direct or indirect (disturbances of the mother), can have long-term effects and therefore strong consequences on its survival.

With this project, my goal is to unravel the mysteries of the close relationship between the calf and its mother, through the use of multi-sensor tags: cutting-edge tools that record the whale’s behaviors! Unlike male’s songs during the breeding season, the vocal productions between mother and calf have only recently been studied in humpback whales. Similarly, swimming, diving, and nursing behaviors have been under-investigated and especially not in a global way due to the lack of complete observations (surface observations only). Several questions remain unanswered: how does the calf communicate with its mother? To what extent is this social bond? when and how is nursing done? how does the pair organize their movements? how does learning take place during the first months of a whale's life?

But is it feasible?

I chose to collect data in the Sainte Marie channel, Madagascar because it is known as a hot spot for humpback whales (nearly 3,700 individuals are counted there every year). It is one of the most important humpback whale breeding areas in the western Indian Ocean. Its relatively calm and shallow waters are particularly appreciated by females for calving. It is an exceptional playground to study newborns. Every year, from July to September, newborn calves can be encountered there for sure.

Despite the alarming need, at present getting grants to carry out scientific studies with an environmental background become increasingly difficult. And the COVID-19 pandemic that has affected the world for more than a year now has not improved the situation. In order to ensure this year's data collection season and that my doctoral project runs smoothly, your contribution is priceless. Do you want to help me? You can participate by donating the amount you want!

What will your contribution be used for?

The total cost of one season of data collection in Sainte Marie is 6000 EUR (2 months), excluding scientific material (already acquired). This includes:

- The food and on-site travel expenses

- The allowances for research assistants

I have been able to obtain some financial contribution from CETAMADA association but I still need your contribution to target my goal! The 2500 EUR targeted in this crowdfunding will allow me to cover:

- The costs related to the crowdfunding (KissKissBankBank commission, etc. 200 EUR)

The ideal is to be able to start the fieldwork in early July for a period of 2 months. If the collected amount exceeds the targeted objective, the frequency of boat trips will be maximized because I can then afford to buy additional gas. This way, I will have even more data!