Help us realize a documentary and interactive device about the issue of rhino poaching in South Africa. 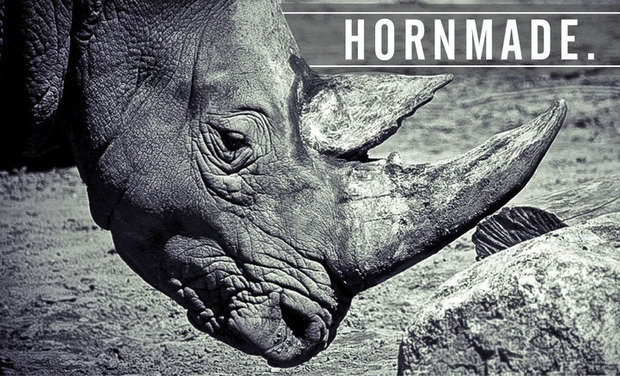 100% !!! Thanks to our 21 KissBankers, "Hornmade." has finally reached its initial objective of 1500€! Thanks to all of you for the support you have shown us and the trust you have placed in our project so far!

Though it is not finished yet, far from it! You still have until March 28 to support us in this very ambitious project.

Any additional contribution can help us : whether to extend the duration of our stay in South Africa, expand our work on the field and improve the overall quality of our report.

The cause : a growing demand in asiatic countries for products derived from rhino horns which traditional medicines pretend to have some therapeutical and aphrodisiac virtues.

The consequences : Nowadays on the black market, the course of rhino horn has become more valuable than the course of both gold and diamond. One kilo of rhino horn is worth approximately 65.000$ a kilo. This potential huge amount of money draws the attention of different criminal organizations and jeopardizes the species of both white and black rhinos living in South Africa. If it goes on like this, rhinoceros will have disappeared from the face of the Earth in a few years.

Despite the considerable resources implemented by the politics, why does the fight against rhino poaching get so few improvements ? How do South African national parks organize themselves against poachers ? What are the limits of those national parks when it comes to organize a fight against an issue which consists in a worldwide traffic.

All these questions catch our attention and we have decided to answer them through a documentary and interactive device. From a practical point of view, it won’t be a traditional report where you only get to be a spectator. In this case, you will get to be actor of our investigation! By using the mouse of your computer, you will be able to act as the main character of this inquiry, the journalist himself! You will be invited to navigate through an interactive scenario in which you will be the one making the decisions!

Through our interactive documentary, we want you to meet the different actors of the anti-poaching struggle, from the business districts of Johannesburg where policies are made to the plains of the Kruger National Park where the survival of South African rhinoceros is daily threatened.

This concept is a relatively new on the Internet, so we are still not able to define precisely how this interactive device will be structured and how the information will be distilled.

Initially, it is important that you remember that the keyword of our project is interactivity!

We have already launched a Facebook Page where we will keep you updated on a regular basis with all the information/documents which will help you to have a better understanding of rhino poaching and its issues. Do not hesitate to react to our project if you have any questions or if you want to share it with the world!

We have already gathered a large documentation but we still need your help to extend the field of our research, to investigate all the aspects of this struggle against poaching and its issues. We will translate all that into a interactive dispositive mixing information, conversations, and interactions with the web users. Our goal is to raise awareness among the public about the dramatic issue of rhino poaching in South Africa.

This project is part of our thesis as we are reaching the end of our five years long studies in journalism at IHECS (Institut des Hautes Etudes des Communications Sociales) in Brussels, Belgium. As students in journalism, it is also a good opportunity for us to do our first major project which will keep us busy on a long period of time and which can be used as a good business card for us when we enter the real professional world. Our motivation has never been bigger!

In addition to being both students in journalism at IHECS in Brussels, we have now been friends for a long time. The two of us share the same passion for investigation and the animal cause. But most of all, it is our will to share our enthusiasm which thrives us as team. We are used to work together. We believe to have developed a strong team spirit which will help us to contribute to the proper conduct of our project.

We are aware that this is an ambitious and really expensive project and it looks extremely expensive. The challenge is significant, unfortunately inversely proportional to the content of our wallet. That is why we need your help!

The first step of our adventure in South Africa will consist in the twelve hours of plane to travel 9000 kilometers which separate Brussels from Johannesburg. Whatever happens, we will go to South Africa, on the other side of the planet, to carry out this project. We believe this reflects our unwavering will to create a documentary and interactive web device about this important issue.

Your contribution is essential! This will hep us organize our logistic once we will be on location. After landing at Johannesburg airport, we will have to drive until the Kruger National Park (car rent + gas), live in the bushes during two weeks (housing + food) and live up with the costs associated with this type of investigation.

We will also need money when we are back in Belgium for the postproduction work and the realization itself of our documentary and interactive device. Although, it is currently impossible to estimate precisely what will be the amount of these future spendings.

The 1500 euros we want to raise will allow us to pay (this list is non-exhaustive and only represents a part of the costs we will have to face) :

- A shock resistant external hard drive to store our data : 110€

If by any chance your generosity was about to exceed our expectations and the 1500 euros expected, the additional funds will allow us to extend our stay in South Africa and deepen our investigation.

Robin Smit Vandenberg and Samuel are both students  in journalism in Brussels, Belgium. Passionate about the world around them and energetic, they hope that their project will also become yours!