An edited guide about the Tripple Dribble project

Tripple Dribble is a research based performance that is a collaboration between a basketball team and artists. The game of basketball is used as a template to explore a context of place, from the microcosm of the court to the vastness of a city. Tripple Dribble is a performance which meets the challenge of exploring a common space between sport and the visual art discipline. The project’s goal is to question the representation of pre-established social contexts within both these worlds.

After a few months of practice and experimentation we set the following rule :

=> see full description of the project below

INTENTIONS OF THE EDITION

Borrowing the vocabulary of art, game, transmission and sport, specific to the nature of the project, the edition is conceived as an instruction manual, a guide proposing the diffusion of this game system through the reappropriation of the reader/player. It is aimed at basketball players who want to modify their strategies, or any other person who wants to experience the game.

The preface of the edition is a text by Camille Paulhan, art critic, independent curator, spectator of the performance in Vitry-sur-Seine. This text offers an external vision of the game, that of the observer.

THE EDITION IN 4 CHAPTERS

Each chapter is accompanied by photographs, drawings and transcripts from training discussions and games in Montreal and the Val de Marne. These elements guide the viewer visually indicating ways of appropriating techniques.

About the artist Julia Borderie

Julia Borderie (born in 1989 in Paris) lives and works in Paris. She graduated from Ecole Nationale Supérieure d’Arts Paris-Cergy in France with honorable mentions. After she participated in a an exchange program in Concordia University, before finally transferring to Université du Québec in Montréal where she wrote a thesis about her work and was awarded her master’s diploma in visual arts. Traveling and immersive collaboration are the driving parameters of her work. Exploring the idea of an overlap as a creative zone, she is interested about how interactions can shape our previously held assumptions.

About the artist Cécile Bouffard, collaborator for Tripple Dribble's iterations in Val-de-Marne :

After graduating from École Nationale Supérieure des Beaux-Arts de Lyon in 2014, Cécile Bouffard will developed her work in residency at the Cité internationale des arts in Paris in 2015 and has been co-organising Pauline Perplexe’s artist run-space in Arcueil (94) since 2014. She participates in group exhibitions: Quart d'heure américain at Mains-d'Œuvres, Saint-Ouen, Suffis-toi d'un buis at the Ménagerie de verre, Paris, at the Galerie Art Concept, Paris, or at the Friche la Belle de Mai in Marseille in the exhibition Rhum Perrier Menthe Citron, at the CAC Bretigny in Sâr Dubnotal at the start of the 2020 academic year.

Tilting between the familiar and the strange, Cécile Bouffard's sculptures cultivate constant ambiguity in terms of category, uses and definitions of form. She creates paintings that have many attributes and instruments that suggest bodies and gestures, behaviours and feelings.

Mark Pezinger Books (Astrid Seme and Thomas Geiger) is platform for artist’s books ranging from one-offs to higher editions and from sound-works to normal books. A main focus of our program is the examination of documentation and the creation of a new presence within our publications. Our collaborations include both, institutional and self-initiated projects and are based on a strong exchange between artist, designer and editor.

The main interest of the publishing house lies around the documentation of performative projects maintaining the existence of the work through publication.

About The Black Forest library

The Black Forest's library linked with Mark Pezinger Books, focuses on the notion of the periphery of art: this is the case with Tripple Dribble, which mixes different

About the graphist : Astrid Seme

Astrid Seme is an independent graphic designer from Graz, Austria. She received her MA at Werkplaats Typografie, NL after graduating from University for Applied Arts, Vienna. Her studio works within the many versatile fields of graphic design: art direction, visual identities and editorial projects—in web, print and space.

DETAILS OF THE BOOK

The distribution of the edition is planned in bookstores and publishing fairs in France, and internationally starting with Canada, Austria and internationally. As an example, we have planned a diffusion in the Val de Marne where the project took place: In Vitry-sur-Seine: Mac-Val, Jean-Collet gallery, in sports centers and public libraries. In Ivry-sur-Seine: Fernand Léger gallery,  the sports centre, in  sports centers and public libraries. In Montreal: Darling Foundry, various art bookshops, museums, art centres, etc.

Tripple Dribble is a research based performance that is a collaboration between a basketball team and artists. The game of basketball is used as a template to explore a context of place, from the microcosm of the court to the vastness of a city.

Tripple Dribble is a performance which meets the challenge of exploring a common space between sport and the visual art discipline. The project’s goal is to question the representation of pre-established social contexts within both these worlds. This is a performance that works in close collaboration with a basketball team to explore forms of communication between the two disciplines. In a continuous gestural dialogue, this serves to destabilize and re-evaluate their respective functions. Thus transforming the game into a new model based on adaptation.The game’s structure is considered as a score, as for music or dance, the aspects of which are free to be altered, broken-down and modified each time it is played.

The purpose of this collaboration between artist and athlete is to define new gestures that will modify certain laws of the game. The aim is to shift basketballs inherent operating ideas/issues while nurturing the necessary tensions that provide the players with the motivation to win. In these new terms, strategy, collaboration and chance are the motivating factors in understanding other ways of considering success.

The first version of the game was initiated in collaboration with an intermediate basketball team from the Montreal area. After a few months of practice and experimentation we set the following rule :
In reaction to a scored basket by a player, the artist is to place a volume (object, sculpture) on the court from where the shot was taken.

Every week practicing in the gymnasium our knowledge and methodology were tested, changing established positions of a each participant. Every player, referee and myself constantly challenged each other’s roles in a non-hierarchical way. This established a heuristic learning method to which the game became a discussion and a negotiation space, everyone and everything on the court became actors and script writers, obliging the system of the game to change as it progresses using uncertainty as a springboard.
The final performance is presented as a basketball game commented and modified with these new rules. The project was first initiated in 2015 in Montreal at The Darling Foundry art center and developed in 2018 in the Val de Marne in Vitry-sur-Seine and Ivry-sur-Seine (Jean Collet Gallery and Fernand Léger Gallery) with the collaboration of Cécile Bouffard.

Developing this project is dependent on the hosting organization, city and largely the surrounding culture. It is is a project that I wish to present working with various cities confronting each culture according to their own rules of operation, reactions and interpretations of the game play. Each rendition will be unique. Each context of the game will reveal ways to adapt it through. In each new city visited the players will play the last model of the game established in the previous place, the different contexts giving rise to new rules.

2 ITERATIONS OF THE  PROJECT : MONTREAL + VAL-DE-MARNE

🏀  Ivry-sur-Seine  : In collaboration with the artist Cécile Bouffard

- to finance the production of the publication: remuneration of the graphic designer, the publishing house, etc.

- to print the book

- to distribute and widely promote the publication.

Your support is precious and allows this project Tripple Dribble to live on. Through the pages of this guide which present the fundamentals of the game, this edition will help to propagate the game into the hands and minds of others in research and on the court.


In Montreal and in the Val de Marne (just outside Paris), players and artists have been deeply impacted by this project developed in their contexts and through their daily basketball practice. Since the performances have already been played out, the existence of the edition is crucial for these people and those interested in the game who did not get a chance to see them. it constitutes three years of work transformed into an object, the trace of this collective creation that we will proudly disseminate through this guide.

Help us to highlight the dynamics of collaboration that this publication shows ! 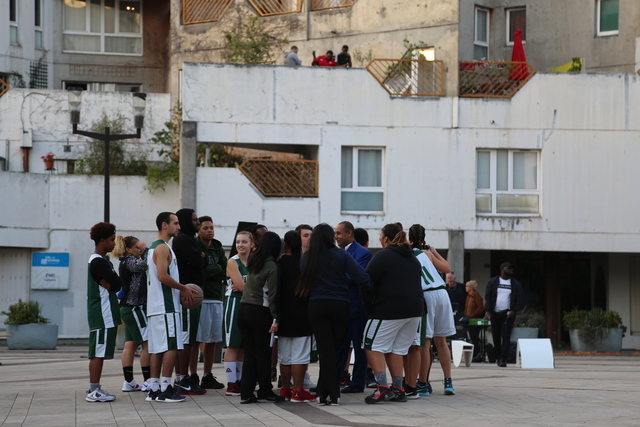 1 signed book incl. shipping, with a personal "thank you note" from the artist and her collaborators + your name printed in the donor list 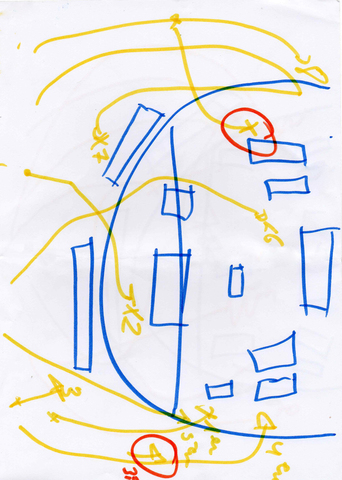 1 signed book incl. shipping, with a personal "thank-you note" from the artist and her collaborators + your name printed in the donor list + 1 original "tactis" drawing made by the players 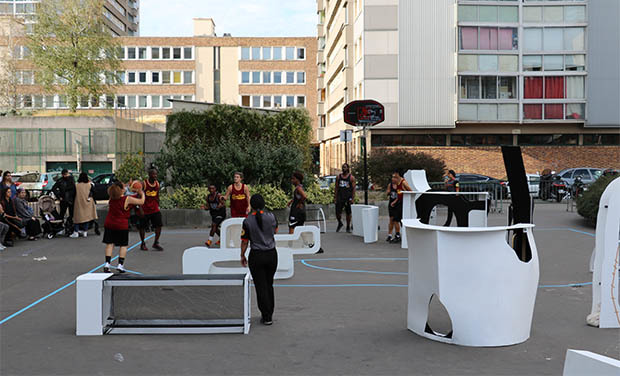 1 signed book incl. shipping, with a personal "thank-you note" from the artist and her collaborators + your name printed in the donor list + 1 original "tactis" drawing made by the players + 1 editioned photo print of the game in play