INSTANT MIX THEATER LAB! THEATER NOW! FOR EVERYONE! IN O.V!

KISSBANKERS ! Help us develop a truly European multicultural theater that may connect us to all languages and people in the world ! 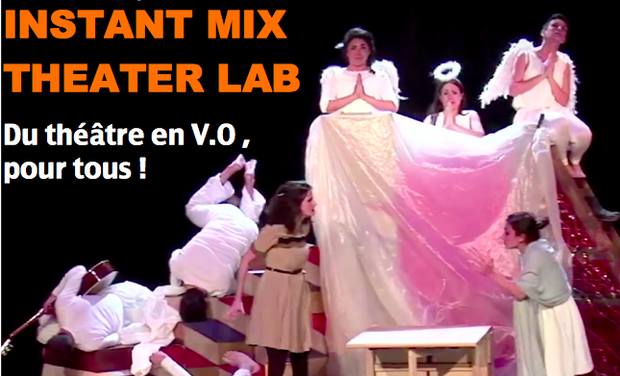 INSTANT MIX THEATER LAB! THEATER NOW! FOR EVERYONE! IN O.V!

In the current climate of ever increasing developments within the Internet and VOD, where virtual reality, subtitling and dubbing are being made easier and faster due to technical advancements, we believe that we need theater, and theater in its original language, more than ever!

Why and how we can make it accessible to all types of audiences, is what we want to share, but first, let us introduce ourselves...

Instant MIX is a European project that was launched three years ago by the French (Paris-based) theater company L'instant Même. Beyond that, we are an instrument in full development to bringing truly innovative quality theater that gives full space to a diversity of languages and cultures, to all European audiences, through artistic research, training, and creation.

WHERE IT ALL STARTED

After fifteen years, creating original plays with mixed casts (professional and amateur actors, of all ages) the L'instant même Company felt the need to expand beyond the narrow space of French theater, and began to develop partnerships with various European countries.

Very quickly, we discovered a new concept we wanted to develop: bilingual theater, translated through the acting itself, with a multilingual double cast, rather than through the form of multimedia/subtitles.

Like us, our partners in France, Great Britain, Italy, Serbia and Morocco, are convinced that it is extremely urgent to rebuild a cultural Europe that is truly open to all influences and languages, including those of immigrants. Offering workshops, seminars, and shows that truly encompass the linguistic diversity of our world.

Our achievements so far

- A bilingual version of De Flippo's Natale in Casa Cupiello, in collaboration with Teatro Bellini in Naples

- A 40 minute showcase entitled MiXanthrope!, adapted from Molière and Martin Crimp, presented at UCL (London) and ENS Ulm (Paris) in 2015, in collaboration with the Birmingham School of Acting

- The dramatization and translation of Hidden, by Miriam Halahmy, a novel for young readers about British teenagers who hide an asylum seeker in a beach hut on Hayling Island. This will be made into a full-scale show in English and Arabic, then French and Arabic, in collaboration with the Universitiy of Taza in Morocco

To develop our existing activities and initiate new projects and partnerships, we are counting on you !

- Workshops with and for professional actors, students, and high school children in Fès and Nador on multilingualism in Morocco. During these sessions we will trial passages in Arabic from the play 'Hidden', and a trilingual version (in French English and Amazighe) of 'Waiting for Godot', both of which will later be performed at the Fès theater festival.

- Two working sessions in Paris and Avignon / Naples on bilingual acting; its rules, desired impact, and possible developments. We will experiment with audio/ video versions of our multilingual plays, and see how they can evolve via an interactive web platform.

- A writing workshop in Novi-Sad (Serbia) where four emerging Serbian playwrights will supervise the translation and staging of bi/trilingual versions of their own plays.

- A session at Middlesex University where participants from all five countries will design a show in a minimum of five languages on how we collectively react to climate issues, entitled  "What do we think about when we (don't want to) think about global warming?"

- The first European Festival of bilingual theater, in the country that started this project, France (Paris region)

- A web platform with reserved access where you can watch videos of our shows, learn our methods, and create your own multilingual chamber theater.

In the meantime, we hope to raise enough money to take that festival to all our partner cities: Birmingham/London, Novi-Sad, Naples, and Nador/Oujda.

What about your money?

It will cover our travel expenses: for the organizers to meet before each activity. For all foreign participants to travel, we need at the very least 1200 euros per workshop, and 3000 for the festival. Which amounts to a total of 7800 euros. If we can raise more than this, we will be able to include more participants within the project and not just the minimum. This could also mean, YOU too!