CONTRIBUTE to the recording of JOSH HOUSEMAN'S next album: "BEFORE YOU WERE THINKING." Folk Music made in California! 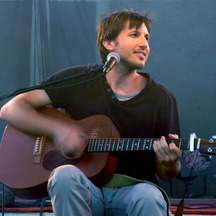 After several concerts in Australia and years of playing concerts in his native USA he has settled in France, where he lives and plays most of the year.

Throughout his travels the Californian singer songwriter has developed a style that is all his own, the guitar percussive and precise, the voice spiritual but aggressive, the text poetic and surreal, all combining to create a personal rhythmic journey. In France he continues to write and perform new songs all the while further developing his musical universe.

The next stage of the process is the recording of a professional album thanks to your contributions!

To discover Josh's universe, click on the video and "Enjoy."

The collection of 3500€ will be put towards the recording of an album at Malambo, a professional recording studio. The recording and mixing of the album " BEFORE YOU WERE THINKING " is planned for April 2013.

If we are able to attain 5500€, we'll be able to further the process by mastering and pressing 500 CDS!

To finish, if the collection reaches 6000€, we'll be able to organize a promotion concert in June 2013 in a special and intimate place, TAC (Territoire Art et Création) in Bois Colombes, France near Paris.

The Malambo recording studio has been following Josh's project and already has a plan in place to help diminish the expenses of recording, but we will still need your support to produce a high quality album. Josh's music already pleases a large number of people, but the recording of a professional album would allow him to develop his music and to catch the attention of professionals who could provide many interesting opportunities.