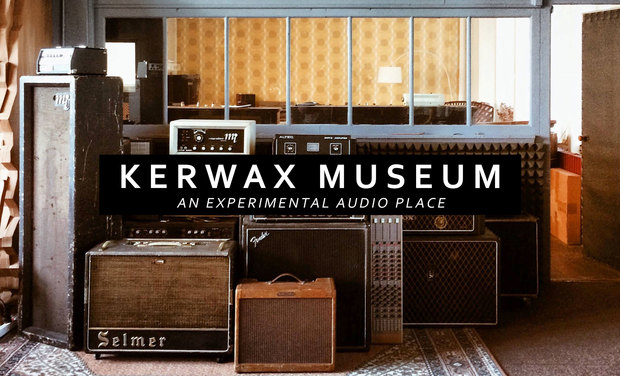 The Audio and Sound Museum

When the Studio meets the Museum

To launch the Kerwax Museum project, we are cooking something special for you...

Following the framework of Arte Concert TV "Live at Kerwax", we will invite musicians for an outstanding experience! Create or reinterpret their music using the various instruments available in the museum, with as a constraint, an aesthetic defined in advance: stereo or mono, electric or acoustic recording, 1 microphone for everyone or multi-microphones, raw sound or with effects...

100% analog sessions on magnetic tape and/or vinyl (direct to disc) with video capture!

A project in progress with members of Portishead, Massive Attack, Get The Blessing & Robert Plant

Gather a superband for a unique performance, and deliver 20 minutes of pure happiness, in vinyl version, picture disc Maxi 45T, on magnetic tape reel to reel and on cassette ...

(All good cooking takes time, time to organize, write, record, mix and press the records ! That's why the delivery is scheduled for July.)

Your patience will be rewarded ;-)

KERWAX is at first Marie and Christophe Chavanon, passionate about music and sound who spend their energy and time to keep  the old analog recording technology alive !

In 2012, we settled down in Loguivy-Plougras, a charming village in Brittanny, France.

On a shoestring budget and with some elbow grease, we turned the ancient boarding school into a residential analog recording studio.

[KER] : "the house" in brittany langage

So, KERWAX, the "house of analog"

On the way, we have been joined by two genious electronicians, Maël Bellec and Olivier Pailler, together we have conceived, designed and build custom tools for the studio, like our custom 24 channels tube mixing desk !

During the past 8 years, we have produced and recorded many artists, organised several "live sessions" for Arte concert with  Lou Doillon, Rover, Grand Blanc, Last Train or Radio Elvis,  welcome pupils, people with disabilities,  turned the studio into a film set for "Cosmic Trip"/"Space is the Place" a film by Christophe Conte et Gaëtan Chataigner....

Jean-Francois Vallée, from KEROUAC to KERWAX

And as incredible as it seems , Jean-François was a pupil of  our Saint-Joseph boarding school in the 1950's ! So when he came back from New-York for good  in 2018, we decided to collaborate to put his career path into light through Kerwax Museum thanks to the  numerous and rare testimonies he has been collecting. Back to the roots !

Artist, singer of the band MAGMA, MUSELEC founder, expert speaker, collectioneer, he has been collecting over 400 m3 of audio material over the last decades, at a time when the all-digital was making them obsolete. He founded Muselec, the sound and electricity museum, to save and preserve these historical audio items and is now transmitting the collection to Kerwax Museum.

Father & sons backline provider since 1956 in Gourin (56), he rents amplifiers, guitares, keyboards to most of the Brittany's venues. Kerwax Museum is the opportunity to preserve and still use legend instruments now too fragile to go out onstage.

Living in Loguivy-Plougras, this music lover but also vinyl collector has started to digitize all of his records to feed Brittany radios. He has been promoting free access to culture for all and has decided, for the development of our village, to bequeath his thousands of vinyl records to the association so that they can be listened to by the greatest number of people.

From these incredible encounters was born the idea of the project that we present to you today, with the active participation of:

Hundreds of guitars and bass.Mixing desks, like the ORTF or Olympia mixers from the Edith Piaf, Jacques Brel, Brassens era.

Hundred of microphones, keyboards, synths, tape recorders including the one used for The Beatles recording session in 1964 at EMI Pathé Marconi Studio.

This fundraising will enable the repatriation, inventory, restoration, and scenography of this collection.

If we manage to exceed the 40,000 target, we will be able to welcome people with disabilities by investing in an outdoor lift and create additional employment.

We will be able to produce the "Sessions d'Exception" by ourselves by investing in a vinyl recorder and video equipment.

Spread the word and share this project around you !