FINANCE our project "La Flèche d'Héron", a short film that will take you on an adventure at Auvers, where the painter Van Gogh lived. 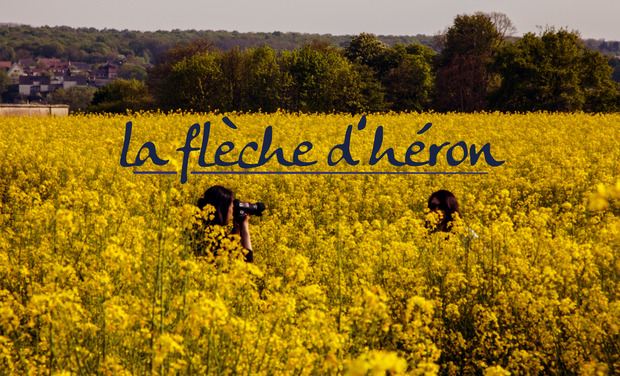 Yvan is well intent when he decides to spend a whole day to his girlfriend Manon at Auvers-sur-Oise. But if Manon thinks « men don’t understand anything » they should be excused, no ?

Yvan and Manon go hiking as a couple in Auvers-sur-Oise, where Van Gogh spent his last days. Very quickly while hiking the two characters realize they might not have as much in common.

Mélinée Boucheron, production director, scouting the location of Auvers in the wheat fields.

‘LA FLECHE D’HERON’ is a short fiction film that centers on Manon, a sensitive woman who is both free and awakened. We want to give the audience the possibility to access the world of Manon : her thoughts, her emotions, her reactions. Witnesses to tangible situations we soon distance ourselves from Yvan. Thus we are more at ease to smile at his clumsiness. His behavior doesn’t suit his intention to be close to Manon. We cannot help but find humor in his off-beat behavior.

The shooting dates are fixed to the 29th of July. The length of the film is estimated to 15 minutes.

The first images of the film. From the window of the train, we can already see the houses of Auvers-sur-Oise.

From the interior of the train we see the landscapes of nature, and villages passing by.

YVAN (Off-Screen) : Yes, I have been stressed. Yes, I worked too much. Yes, we didn’t see each other enough. Yes, but we’re going to remedy that. And right now.

The train comes to a stop.

YVAN : Without question. This day is yours, you see ?

MANON : You flatter me. I will be selfish then.

Sébastien Garcia, co-writer and co-director, and Norbert the boar, scouting the woods of Auvers.

« The idea for this film came to me after I went hiking at Auvers-sur-Oise with a friend. At first my friend and I wanted to recreate our shared experience in a docu-fiction film. But my friend had another  end in mind other than a simple return to Paris. She thought her character should escape into nature and never return. From this moment on I was conscious of the fact we were entering the world of pure fiction. What reasons could push the character of Manon to leave behind her companion ? The film had to speak of a separation. The setting of Auvers-sur-Oise was completely adequate for the unfolding of this story because it is where Van Gogh spent his last days. »

The director, Nicolas de Monès, goes for a swim in the river of the Oise to reassure his actors who will have to bathe when shooting begins.

Since I have finished my studies I have worked  on many films as a first assistant director, including a feature length ‘Naz + Maalik’, directed by Jay Dockendorf, selected in the official selection of the South by Southwest festival in 2015, and a short film, ‘Welcome’, directed by Serena Dykman, primed at the Cannes festival in 2015 at the American pavilion. Also, while at NYU Tisch School of the Arts, I directed many short films visible on my web site.

Sébastien and Nicolas are long time friends. When Nicolas returned to Paris, Sébastien contacted  him. They got along very well while collaborating on various scripts. Sébastien has a theater formation as an actor and is also a musician. He has a vast knowledge of cinema and literature. Also he knows very well how to direct actors, and loves to work on a team project.

After graduating from the Sorbonne and the Gobelins school I am working in the audiovisual production. Nicolas' family and mine possess two neigboring houses in a small village in the Cévennes, France, which allows us to see each other in summer. I joined this project with enthusiasm. Seb and Nicolas, they are my "boys" as I like to call them. After working for months in Seb's kitchen - one Macbook, 80 gallons of tea, and a feast of cigarettes -  I'm really looking forward to going on the field with a camera!

I just spent four years in North America where I worked as a DP. My various projects as a DP in fiction as well in TV allowed me to explore the multiple methods of shooting and lighting. I have accumulated a great deal of experience while setting up lights and the frame of the image. I always consider what the director has to say about  the spirit of his film. Also, I have had the opportunity to lead a dozen crew members while shooting short-films visible on my site.

I studied filmmaking at the Factory, a school in Lyon, in 2011. After I directed and wrote two short films, I familiarized myself with the mechanisms of the creative endeavor that is film by practicing the various jobs that constitute a team. I went to Paris in September of 2014 and I took up an internship in a production company. Today, I work as an assistant director and dedicate my time to my own projects.

Totie Herman, an American editor in paris France, has over 15 years of non-linear editorial experience across various domains and international projects. Some film credits include performance editor for the Jane’s Addiction cult-classic rockumentary ’Three Days’, Monteur d’image ‘Portraits de Maitresses’ by Rocco Labbe, special credit for ‘Judy Berlin’ by Eric Mendelsohn, and has also edited several documentaries as well as programming for TV and various internet channels.  He has also been creating and editing in-cinema projections for the European Independent Film Festival.

We can rent the equipment and shoot!

We can do color correction, sound mixing in post-production and pay a composer to add a soundtrack for the film. There will be music in any case!

We can rent the Red Epic Camera and rent some tracks for smooth camera movements.