Lucha is a photographic project made by three hands and six eyes! It lasted almost a year and now it aims to become an exhibition. Help us! 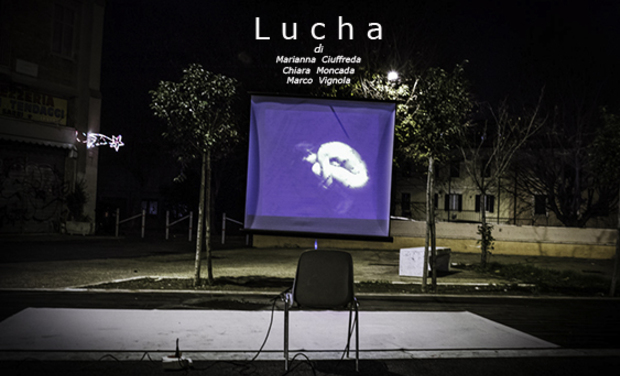 We are three photography lovers, who approached social reportage through a path of training and study. We decided to tell through our eyes a really difficult and complex reality, unique in Italy: The House for Women Lucha Y Siesta.

It is a place where silence and empty spaces maybe tell more than words the condition of women victims of violence.

Lucha Y Siesta was established in 2008 thanks to the will and the courage of a group of feminists who decided to occupy a building belonging to ATAC (the company of public transport of the city of Rome), that was abandoned and left to neglect and degradation, in order to transform it into a House for Women, a space conceived to give hospitality to women in need, coming from situations of violence and economic, social, psychological and physical difficulties.

Over the past six years, more than 70 women (Italian and foreigner, young and old, with or without children) have been welcomed and hosted; nearly 700 women have been helped through a counseling service giving a concrete answer to the hardship and abandonment condition in which, often, women who are victims of violence are left. This violence not necessarily being limited to physical one, but extended to all forms of it, perhaps less obvious but equally impactful and debilitating: psychological and domestic violence, such as stalking, threats and intimidation from family or friends; economic violence, that is, the inability to find a job, due to the imposition by family members or because of racism and discrimination in the workplace; religious violence, which leads to discrimination within the context of daily life, or to commitment to take roads against personal will.

Over the years Lucha Y Siesta has become an important reference point for women looking for shelter, for a place where taking back their lives, breaking the chains of violence from which they have fled. The duration of the stay at Lucha Y Siesta is not fixed and determined from the start, but fulfills the requirements of each woman, who can stay there as long as necessary to restore her personal balance. This period usually involves a few steps, never planned or structured from the outside, but rather spontaneous and common to all women: an initial adaptation to the house and to the coexistence with the other women, which also deals with the processing of the past and the condition they want to free from, and a second moment in which women actively strive, always accompanied and supported by the management group, to give a concrete answer to their own situations. The final step is the search for a house, a work, sometimes for a love relationship.

Lucha Y Siesta is a place of transition, a space suspended between the before and the after, including the rejection of the past and the construction of a new future. An all-female place in the heart of popular Rome where very different and distan stories and lives intertwine and become stronger, thanks to constant confrontation, dialogue and exchange, and, in the natural propulsion of life that flows and is given, they can finally restart, free from the past and from the bonds of violence.

Gender-based violence against women is a very important issue that affects a growing concern throughout the European Union. According to the latest statistical survey carried out in 28 EU countries there are 62 million European women aged 17 through 74 who have suffered some form of physical, sexual, psychological, economic violence, or stalking, up to threats and online intimidation suffered even before the age of 17. Only in 2012, 13 million women in the EU have been victims of physical violence, and 3.7 million of sexual violence. As for the cases of femicide, killed women represent the 30.9% of homicides.

According to the report published every March 8th by the House of Women in Bologna, in Italy the number of femicides continues to increase from year to year: 126 women killed in 2012, 134 in 2013, and from the beginning of 2014 over 100 cases have been already recorded. According to a survey conducted by the same House of Women in Bologna, in Italy there are currently more than 115 anti-violence centers, among these 93 are run by women's organizations and 56 have houses of hospitality. Only in the last decade public institutions (Regions, Provinces, Municipalities, Health companies, etc) have been active in preparing laws helping anti-violence centers, providing facilities to associations, activating agreements in order to manage the centers and, in some cases, sharing common goals and strategies.

The increasing visibility of political, institutional and cultural issues related to violence against women does not coincide to a real recognition of the gravity of this situation through, for example, the allocation of adequate funds for the development of projects led by the existing centers and possibly for the creation of new structures. The answer to the problem is due, to a greater extent, to the contrinbution and the commitment of volunteers and activists, mostly women, whose work is supported from below, and not by institutions.

Our work was born within a photographic reportage advanced class, organized by the cultural association WSP Photography in Rome,  held by Fausto Podavini, winner in the 2012 of the World Press Photo, Daily Life section, with the well-known and award-winning project MiRelLa.

The choice to tell the reality of Lucha Y Siesta has been strong from the very first moment. Through personal and different paths, the three of us have developed over the years a strong interest in the issue of gender. These curiosity and attention have led us, quite naturally, to identify Lucha Y Siesta as our photographic subject. We have shared a common determination to get in touch with a very complicated reality, both from an emotional and photographic point of view. We realized early that the silence and "dead" moments, the solitary steps that we often came across during our visits, the neon lights, the decaying structure, had a power and a life of their own that just emerged in that seeming inaction. The moment before leaving contains the energy of the journey that is going to be!

This is what we have seen and breathed in the walls of the House. A power that expresses itself in small things, in looks and gestures. We walked on tiptoe finding ourselves, after some time, greeted by women in their rooms, sharing their secrets, among their hugs, often invited to their tables, always full of mouth-watering dishes. Moved, we greeted some women who were leaving the House to embark on a new journey, to spread themselves on new roads. With the other women, we greeted and welcomed new guests, being able to grasp in their eyes shyness and bewilderment. Participating in meetings and events organized in the House, we were able to get to know not only individual women but also the spirit of the group, the complicity, not lacking sometimes of tension and debate, which is the bond of this wonderful experience.

Lucha Y Siesta in an option for many women, existing thanks to the determination of other women who have defied the law and who struggle every day against a system that does not give priority to the dignity of women, to their right of freely choosing their life, their future. Our work tries to tell the life in the House as a transition moment towards a new future, free from the constraints of violence and from the difficulties that have permeated the past from which each of them, without exception, is fleeing from. The rarefied atmosphere, the empty spaces, the shadows, the eyes sometimes absent and sometimes full of determination, are the pieces of a work that attempts to discover the tremendous dignity of these women, and perhaps of all women. The work we have done has allowed us to challenge and deal from both a photographic and human point of view, giving us the opportunity to understand the importance of such an experience that we will try by all means to disseminate and let others know.

To date, our work has received two honorable mentions: the first at Perugia Social Photo Fest and the second at the FIAF Festival in Nettuno (Rome) during which the guys of the webzine Discorsi Fotografici wanted us to tell about our experience in a brief interview (from 13').

Born in 1981 in Manfredonia (Puglia), I have been living in Rome since 2000. In 2008 I graduated in Pharmaceutical Chemistry and Technology, the same year starting to get interested in old analog cameras and attending a dark room course with the teacher Samantha Marenzi. In 2011 I began my training in digital photography and attended several classes organized by WSP Photography in Rome, and deepening social reportage and photography with various workshops in Italy and Ethiopia with photographer Fausto Podavini. In 2013 I attended a one-year reportage class with Fausto Podavini. I worked with the coworking agency YEA-contest, I realized various photographic exhibitions in Rome and had my work published by several photography publications as Private Magazine, Black Box Gallery in Portland (Oregon), Up! Urban Photography Magazine. Photography is for me a journey through the others' lives and through lived places. It gives me the opportunity to come into realities hitherto unknown, absorbing a small part of them.

After graduating in International and Diplomatic Relations, I embarked on the road of editing, writing for two years in a monthly publication specialized in the service industry. I have been living in Rome since 2008, and here I worked for several years at CAE (Città dell'Altra Economia). I always kept alive my need to write and tell, following some Roman experiences related to social movements and spaces, publishing several articles mainly for online publications, and sometimes for one of the main national newspapers. In 2009 I began studying photography at WSP Photography. My field of interest is the social reportage and what always attracts my attention is people. My work has been published by several online publications, by La Repubblica, and I took part to a group exhibition presented in three different places in Paris.

Born in 1978, I am proudly Lucanian but, happily, Roman by adoption. I approached photography thanks to the courses and the activities held by the cultural association WSP Photography. I'm passionate about social and "intimate" photography and I consider it as a means to know and meet, a personal tool for looking at the world and to myself through an eyepiece and "see" what reality sometimes hides: between a photograph that says and not touches, and one that touches and not tells, I will always prefer the second one!

The collection will help the realization of the show based on the photographic project made at Lucha y Siesta: 26 photos, constituting the whole project, will be printed in A3+ format and will be set up with white passepartout and black wood frames. Also, an ebook will be made, containing the photographic work as well as interventions and writings by the women of Lucha Y Siesta and the management group, by Fausto Podavini, our teacher and internationally known photographer, and by Sara Feola, photo editor and photography historian.

Once printed, the pictures will become a Lucha Y Siesta's owns, and the first exhibition will be held in its spaces. Our hope is to present the work in all those realities that might be interested in talking about the experience of Lucha Y Siesta and addressing the issue of gender. We will concentrate our efforts in disseminating the project as far as we can get.

The extra-budget money raised will be used to pay part of the costs for the renewal of the roof's building (the total amount required being about 20,000 Euros, that women of Lucha Y Siesta are collecting through the activities organized by the House).