Create long-lasting bonds; bridge the gap; get on board and Let’s Trample Prejudices to change perceptions related to disabled people. 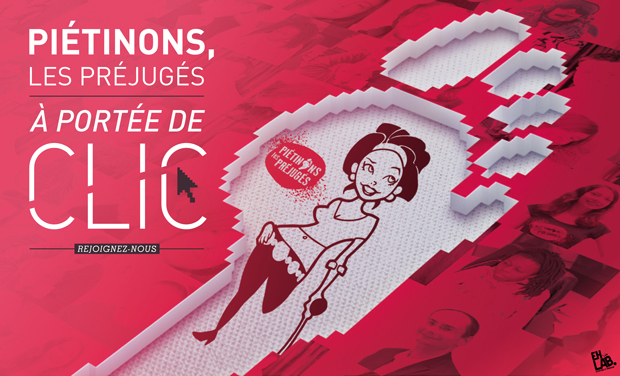 VIDEO OF THE CAMPAIGN WITH ENGLISH SUBTITLES

Launched in November 2014 in the forecourt of Paris city hall, Let’s Trample Prejudices is an awareness campaign based on innovation, interaction and educational methods.

The concept comes from a simple idea: give people who are not directly concerned or affected by disability issues the chance to get involved in the fight against discriminations of disabled people through spontaneous, tangible, bonding and effective actions.

Because the issue related to disabled people should not only be limited to: governments through legislation and the necessary resources to put in place, private companies through different actions organized in agreement with their Corporate Social Responsibility; and families and NGOs which stand up for disabled people… NO, this issue should definitely concern everyone. And each citizen can, at his or her own level, daily help make the change for a more inclusive society.

We have decided to give the audience an active role through the awareness campaign Let’s Trample Prejudices; not only for a day or a special week for disabled people, but nearly for a whole year from March to November in order to have the chance to leave a real impact on our targets in places where the revolution starts: in the street and the Internet. The more you’ll support this project, by a simple supportive click – LIKE – the better for us in terms of opportunities to bring a real impact on society.

Following the example of ads that has the power to alter our perceptions and behaviors, we expect Let’s Trample Prejudices to print new images of people with special needs in our subconscious with a message in sync with the diversity of our society; and to enable disabled children and adults to refer to highly positive images in their personal development.

Our campaign targets uppermost the young generation that will pave the way for a change in social awareness and built a new society. A society in which disabled people are no longer seen as a flaw but considered as any other citizen.

We need all of you to take action right now: join us and let’s build together the society we want to leave to our children. Everyone can bring a stone to this edifice. Even with a modest contribution of 5€, each one could be an important part of this project which cares about human beings and its diversity by giving opportunities to different groups of people to meet and get to know each other.

GET ON BOARD AND LET'S TOGETHER BUILD THIS INCLUSIVE SOCIETY

The awareness campaign Let's Trample Prejudices has been launched on March 18th 2015 in the subway corridors (southern area) and in the platforms of the main stations in Paris and its suburbs with 140 billboards.

TO STOP preconceived ideas and definitely break social and professional barriers of inclusion not only need that we meet and get to know each other, but also a good information on disabled people’s experiences; and the design of a new collection of dynamic and highly positive images to replace the pathetic and human misery images that go along with people with special needs. From March to November 2015, Let’s Trample Prejudices plans to mob billboards to pass on a new message every month with a powerful social impact. This will only be possible thanks in part to you through this fundraising campaign.

Despite its status as a general interest campaign, the billposting budget of this program is 160 098 €. As already mentioned above, it started March 18th in the subway corridors and platforms in Paris and its suburbs to show where will go the money raised.

We have set a minimum goal of 40 000 € in this platform which will enable us to finish the first stage of the program and cover all the 6 zones of Paris’ subway. The poster campaign lasts 2 weeks in each zone. Also, we’ll organize informal meeting spaces to allow people to speak openly about different subjects related to disabled people such as parenthood, sexuality, mobility and accessibility.

If we reach this first goal then, we could go further and bring our program from the subway to the street to meet car drivers and passers-by. We could install our bubble in some districts to meet neighbors, create long-lasting bonds and break preconceived ideas. To reach this step, we’ll need raised a total amount of 100 000 €.

Let’s Trample Prejudices would like to reach also opinion leaders as well as travelers and tourists with its ambitious program at Charles de Gaulle airport. Its positive images aim at enabling disabled employees to speak openly to their singularity without being discriminated; and showing that disability is not a curse that happens to some families because of their sin…

A last step that would only be possible if we succeed and raise another 60 000 €.

Let’s Trample Prejudices: an audacious art campaign that needs your support to go on in bringing some changes in the social and professional perceptions.

Let’s Trample Prejudices is a complete set of drawings inspired by preconceived ideas which tells about people with special needs’ experiences, but also their dreams and wishes to give opportunities to disabled children to develop with positive images.

Let’s Trample Prejudices is designed by E&H LAB agency and sponsored some private companies among others Orange, Malakoff Médéric, Transdev, ZenithOptimedia and Alcatel-Lucent groups; as well as media such as France Télévisions group, L’Humanité, L’Express and Slate. Sir Jean-Louis Garcia, President of the APAJH federation is its Godfather.

APJH is a NGO dedicated to young and adults with special needs. It has strongs roots in France.

Our awareness campaign is also supported by other entrepreneurs and citizens…