Support Shaï and Adrien to make their first CD a real story !! 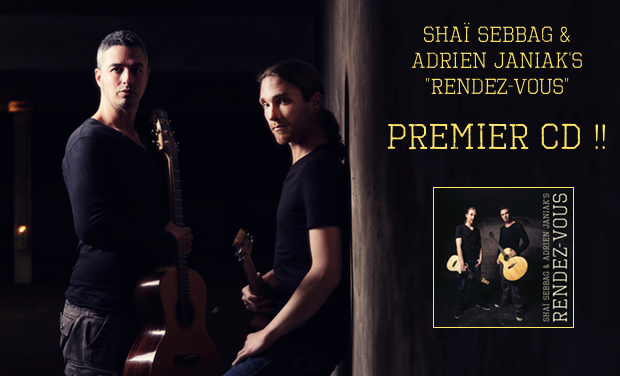 Adrien Janiak et Shaï Sebbag : The unexpected fusion of a ukulele and a fingerstyle guitar. Adrien and Shaï met in November 2013 during a famous guitar festival and only three months later their music took them on a tour in U.S.A, from Los Angeles to San Francisco via Santa Monica, Santa Cruz, and Los Gatos.

Adrien and Shai's show is inspired by the famous "round robin", sailing from one's universe to the other's, mixing solo pieces and unique duets.

Since 2012, he's been captivating the public of the most prestigious Ukulele festivals, in Hawai'i, France, Quebec, Italy or Belgium.

In 2014, Shai successfully performed at the All Star Guitar Night, hosted by Muriel Anderson, like many guitar legends before, as Mike Stern, Tommy Emmanuel, Steve Lukather, Lee Ritenour..

This Foundraising will help to make it real 500 Cds.The price for these are 500euros and around 50euros

Thank you so much for your support ;-)