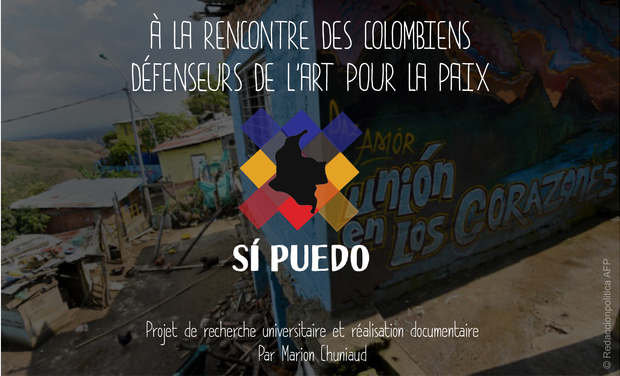 " The profusion of images, artistic performances, development discourse of violence, reflects a malaise that has been raised for many years, prompted by the need to understand the incomprehensible, to testify actions and situations where the inhumanity of the world is revealed "

Forced displacement within or outside the country, encouraged by armed political conflicts or natural disasters are increasing.

Appear as a result of these tragic and inhuman events, all the physical and psychological harm to the most vulnerable populations and living together is a more sensitive and central issue. In this global context, we should be concerned about the issue of harmonization and identity reconstruction both individual and collective.

And in more details?   The trip to Colombia is scheduled from 15 January to May 2017. Based on an idealistic-humanist approach of international and intercultural communication sciences and recent reports of the UNESCO Culture of Peace (2015).  My goal is to understand and analyze how the creative diversity can be part of an emancipatory and peaceful approach to encourage local dialogue and peace.

- From 1960 to 2005, Colombia went through an armed conflict of extreme violence: the "civil war" is one of the oldest in the world with the one in Burma according to the 2015 report of the European Commission Humanitarian Aid and civil protection in Colombia. It would have made almost 8 million victims (among which 81.5% civilians) 15,000 missing person, between 1958 and 2012 and 220 000 deaths. (2nd country behind Syria in terms of internally displaced people in the country (IDP)).

- Colombia was historically influenced by strong migration and many political conflicts, and continues to suffer political violence, social and racial discrimination at various levels.

- Yet Colombia is a country full of resources, where creativity and joy are also deeply rooted. The Colombians who are acting  for peace are examples of resilience to the world.

1. Understand the multidimensional context of Colombia.

2. Describe the purpose of art in the Colombian context and see how it can help the reconstruction strategy of the country.

3. Study with a research approach the emancipatory and lasting benefits of the artistic process at individual and collective levels.

1. I will publish a thesis containing the result of my research (+ articles or scientific papers : publications and conferences))[1]

2. The production of a video report to represent the social and cultural reality of the country as i would see it on the field. This would countain mini-portraits of the people I interview and would be realized in collaboration with students and local associations.

3. A feedback event in Paris in late 2017 with the film viewing and discussions.

[1] To date, several conferences have already been held in Montreal to present the project:

Why the name Sí puedo?

Anthropologist Caroline Moser has focused on community participation and the empowerment process (power to act by ourself) in Latin America and particularly the participation of women in the peace process in Colombia. She interviewed a group of 27 participants to identify which indicator seemed to be the most significant to represent their commitment to peace in Colombia. The expression Sí puedo (Yes I can) was noted almost unanimously during interviews. This expression, with a strong meaning, is a common symbol to the commitment of all those Colombian women acting for peace in their country.

WHERE THAT MONEY IS GOING ?

€ 1,500 for participation in financing the video equipment (hire) and donation to different people contributing to the project (editing, translation, etc.)

€ 380 to create a wonderful event feedback.

< 110%  After Paris, I organize an event feedback to Montreal!

< 120%  Donation for associations with whom I worked.

< 130% The possibility to go back to Colombia ? More time and more resources = a movie going further in research and realization.

< 200% I export my project to Brazil, Mexico and other latin american countries