Radio “Reaction” is a Bulgarian online radio station created by students. A place where students fall in love with radio journalism. 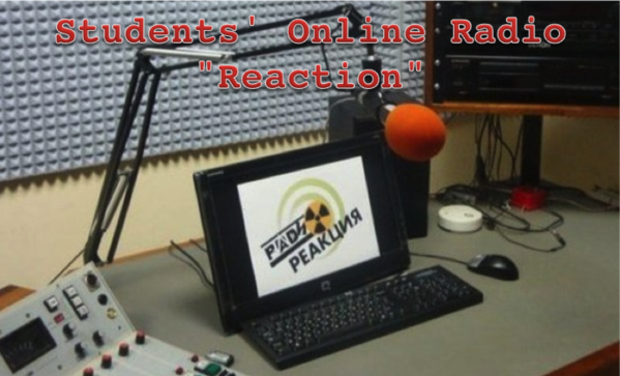 DESCRIPTION: 2010 was a significant year for the Faculty of Journalism and Mass Communication of Sofia University – this is when the radio journalism students finally had the opportunity to have their own students' radio . The five students who started the whole idea received some help from some of their lecturers and thus created the cozy studio on the last floor of the building.

The founders of the radio gathered different people around the initiative and soon radio “Reaction” started to work. In 2011 the founders graduated and left the radio to other students, who continue to develop it nowadays. That legacy is of great importance because the students who work in radio “Reaction” now will pass the project to the younger students.

The creation of radio “Reaction” was an answer against the policy of Sofia University according to which the first students’ radio “Alma Mater” no longer needed students to actually function. This is how radio “Reaction” became a rebellion against mainstream media. Now the radio is one of the two working students’ media in the Faculty of Journalism and Mass Communication and one of the most well-spread online radios in Bulgaria. “Reaction” provides a place where young journalists can practice as well as  supports the freedom of speech with all means – it was one of the main sources of information during the anti-ACTA national protests and the protests in support of the preservation the natural heritage.

We made a lot of partnerships during these 3 years of existence – we are working with many organizations, young artists, music and art festivals etc. We need your help to maintain the legacy of radio “Reaction” and let our future colleagues continue to actively support important cаuses like the freedom of speech and independent journalism.

THE CREW:  The crew of radio “Reaction” consists of talented young people, who work as a team. This team works in small groups, which create the abundant program with various shows for the radio station. The radio is managed by a Board consisting of 5 members who are elected by the members of the previous Board.

Here we will provide you with some materials that will give you the opportunity to “hear” our work and  most importantly - to enjoy it.  First in our list is a show that was created by a part of our crew for broadcasting in both radio “Reakcia” in Bulgaria and  Radio R in Brno, the Czech Republic. The show is called – ‘Radio Shower’. You can check it out here:

Among the interesting things we've made in Studio 69 are different interviews with some famous and some not that famous people. To give you a taste of that you can check out our interview with the British radio DJ Bobby Martin - one of the people who started the pirate radio stations in the UK in the 60s:

Interview with Bobby Martin by Radioreakcia on Mixcloud

Among the people who inspire is also the famous singer Nneka. Here's an interview we did with her:

Another show we created is “Friday Chopsticks”. The program is a combination of music and talk show and its focus is the culture of East Asia. You may ask “What is so cool about it?”. Well the thing is this radio program represents to the Bulgarian public an undiscovered part of the world. In the recent years the entertainment industry in Korea, Japan and China started to produce a lot of high quality music, films and TV series. This is the thing that nowadays catches the attention of many young people around the world, including in Bulgaria. Here are some of the best shots of “Friday Chopsticks”:

Do you know that in fact in South Korea also listens to radio “Reakca”, especially the show  “Friday Chopsticks”?

More interviews, photos and information about our work - COMING SOON! :)

We are asking you to support our project because the life of our beloved radio is in your hands. Unfortunately for now our attempts to find finding on our own remain fruitless. This is why YOUR support is vital for us. The money we try to collect are needed for new equipment - headphones, recorders - and to pay our music copyrights fee. Radio "Reakcia" has a very important mission – it gives young people a platform where they can speak about their interests and problems. It gives them a chance to discuss the possible solutions of a huge array of problems - educational, political, cultural. Apart from that radio “Reaction “ is the only students' media in Bulgaria providing journalism students with the opportunity to study and practice at the same time.