Over the course of a weekend, have a meet-and-greet with the actors from the epic series in one of the most beautiful castles in the wor… 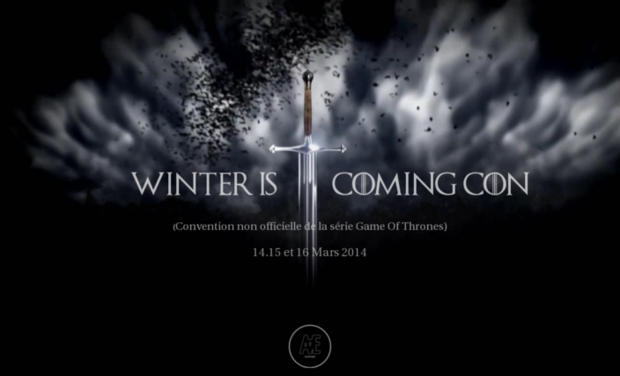 Over the course of a weekend, have a meet-and-greet with the actors from the epic series in one of the most beautiful castles in the world…

Because we’re tired of seeing every fan convention taking place in dull locations such as depots and warehouses, and because every major convention is taking place outside of Europe, we’re bringing you WIC CON, the first ever European Game of Thrones convention, set to take place in an exceptional venue.

With 14 million viewers every week and more than 5 million downloads, this is the show to end all shows…

Being part of a Game of Thrones convention just a few days before the launch of season 4 is a once-in-a-lifetime opportunity for any self-respecting fan !

How would you like to spend 3 days in the castle of Carcassonne, going from one conference to the next with actors from the show, having autographs signed, and having some medieval roleplaying fun on the way ?

Our idea ? During the convention you’ll have to defend your house’s colors (Stark, Lannister, Baratheon or Targaryen) which you’ll choose on arrival through a series of games. Over the course of the weekend, GOT-related activities will allow you to cumulate points. At the end of the convention, the family with the most points will go home win the golden crown.

We thought it wouldn’t make sense to organize such an event in a warehouse, we wanted a venue that would fit the grandeur of the show:

JASON MOMOA is poised as one of Hollywood’s upcoming leading male action stars. He will next be seen in David Hayter’s feature Wolves for EOne and Crystal Sky.  In addition, he has just landed one of the lead roles in the new Sundance Channel series, The Red Road. Last year, he was seen starring opposite Sylvester Stallone in Bullet to the Head, directed by Walter Hill for Warner Brothers and Joel Silver. JASON has finished production on Road to Paloma, a road-tale, revenge thriller which he wrote, is acting in and also directing. He was tenacious in getting this project funded. Making his big screen debut in the summer of 2011, Jason took on the iconic character of ‘Conan,’ garnering positive reviews in the Lionsgate/Millennium franchise reboot of Conan the Barbarian. Jason also played an integral role in the success of the critically acclaimed and Emmy-nominated first season of the HBO series Game of Thrones (There was such an overwhelming response to his role of ‘Khal Drogo’ that they wrote his character back into the second season.) He also established a large genre fan base from his portrayal of ‘Ronan Dex’ in the SyFy series Stargate: Atlantis (2005-2009) and was a Series Regular on North Shore for FBC.

- We already have letters of intent from a dozen actors from the show, but we can’t communicate any names until the first threshold is reached. As thresholds are reached we will update the list of actors coming to our convention.

The venue: the castle of Carcassonne

Activities, medieval banquets and scenery, for three days you will be part of the Night’s Watch.

FRIDAY: Participants will join the convention between 10am and 6pm. Convention passes will be waiting for them at the hotel.

7pm: first meet-and-greet with a VIP section for the lucky few.

SATURDAY: Conferences and autograph sessions will take place all day with photo sessions in the afternoon. In the evening, join us for a medieval banquet where participants will be able to dance, play music, and even test themselves in sword fighting jousts!

For all your series-related needs, sales booths will offer dvds, blurays and merchandise from the Game of Thrones universe. In addition, a treasure hunt will take place over the course of the day to give each house an opportunity to cumulate even more points in their name.

SUNDAY: Conferences, autographs and photos are in order again, as well as another treasure hunt in two parts. In the afternoon, we’ll wrap things up with the results of the tournament and the crowning of the best house.

So why wait ? Join us on this adventure, and come live this once-in-a-lifetime opportunity !

Hurry up ! Brace yourselves, Winter is coming…

Learning from other people’s mistakes, As an Event chooses crow-based financing to fund the first ever convention in Europe entirely dedicated to Game of Thrones.

In terms of budget, ensuring this first threshold allows us to guarantee the presence of two actors, rent the castle for the duration of the convention, and book activities for the whole weekend.

If we go beyond this first goal, it will become easier for us to add to the list of actors coming to be part of this event, and offer a truly unforgettable experience.

Actor fees represent 70% of the costs for the organization of such an operation, so the more money we gather, the more actors we can bring to you ! Sky’s the limit, it’s up to you to make this event what it can be !

If our first goal is not met by the end of the countdown, everyone gets their money back, no matter how much they gave to support us in the first place. So you can fully trust us with your support in making this a success.