Help the production of my new solo CD that will be released by Brilliant Classics worldwide. Join me in this new adventure ! 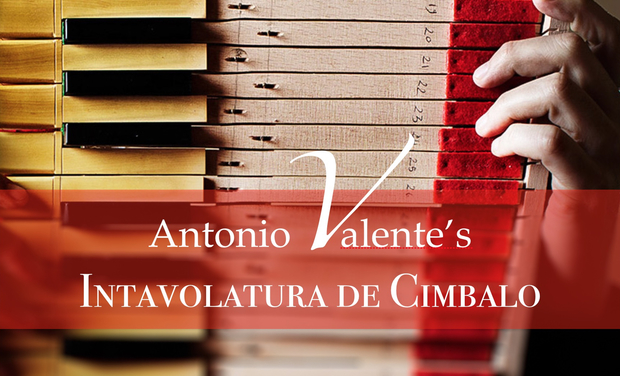 Just a few years after the release of my first solo album on the musicians of the Gesualdo’s court, here I am with a second project entirely dedicated to the late sixteenth century Neapolitan keyboard music. In December 2014 Brilliant Classics published in fact my CD entitled "Giovanni de Macque, The keyboard school at Gesualdo's court", devoted to the complete performance of the so-called "Manuscript Rossi" preserved in the British Library in London (call-number Ms. Add. 30491). The recording of the project Valente’s "Intavolatura de Cimbalo" thus fits in my artistic and musical journey of rediscovery of the Neapolitan repertoire of the late Renaissance. Already several years ago my interest had been caught by this collection for the freshness of his style and the directness of his musical language which, unlike the more artful and sophisticated "Manuscript Rossi" does not seem to offer any resistance to the meeting with modern audiences. Following my previous record work I decided to devote myself to the study and recording of this wonderful musical work.

NAPLES In the late sixteenth century, the Kingdom of Naples was undergoing a deep transformation. The vigorous growth of the city’s population, which had exceeded 200,000 inhabitants, resulted in the city becoming the largest in Europe. The population growth was coupled with strong economic expansion, thanks to the export of agricultural goods. It therefore seemed the right time for the development of a ‘national’ bourgeoisie in southern Italy, right in the urban area of Naples. However, the Spanish viceroys who ruled Naples at that time were not able to reduce the privileges of aristocratic families or impact their large estate incomes – nor did they want to – and during the second half of the 16th century the aristocracy only strengthened, something that had far-reaching consequences for Italy’s subsequent history. The enduring popularity of the madrigal in Naples while it was waning in importance elsewhere in Italy was a direct consequence of this phenomenon, and it is precisely in this context that we find Valente.

VALENTE'S INTAVOLATURA DE CIMBALO In the book entitled "Della Pratica Musica", the music theorist and composer Scipione Cerreto implies that Valente was not born in Naples, listing him as being “per Antichità napoletano”. In this sense Cerreto let us think that he was Neapolitan by residence rather than by birth. Valente was organist at the church of St Angelo a Nilo in Naples from 1565 to 1580. During this time he published two music books, the surviving Intavolatura de Cimbalo in 1576 and Versi Spirituali in 1580.

It is fascinating that the "Intavolatura de Cimbalo" might be one of the first examples of printed music exclusively dedicated to a plucked string keyboard instrument, and resembles an opera omnia collecta because of the extraordinary variety of types of music it contains. In short, it seems that Valente incorporated all keyboard music genres of his time, such as plainsong elaborations, vocal transcriptions, stylised dances, variations on a bass and abstract pieces like ricercari and fantasias. In this recording I find it appropriate to add the original vocal model to the diminished chansons contained in the collection. Singers and instrument players of L'Amorosa Caccia, Renaissance ensemble that I founded in 2015, will perform them.This project to explore Valente’s style is even more poignant knowing that the collection of Valente was among the first publications of the renowned school for keyboard that flourished in Naples at the end of the sixteenth century.  In a few years the school would become a bustling coterie of fine composers, including Ascanio Maione, Giovanni Maria Trabaci and Giovanni de Macque, intimately gathered around the most enigmatic figure of Prince Gesualdo. It should be noted that the notation used by Valente, perhaps one of the first musicians to make a clear distinction between organ and harpsichord, is notated in a variant of Spanish keyboard tablature, similar to that of Cabezon or Bermudo.  This notation is a unique in the history of Western music.  The Intavolatura  is deeply idiomatic for cembalo: free-voiced polyphony, brilliant passage work, elaborate ornamentation, an avoidance of long notes, ringing chords for the left hand.

HARPSICHORD AND VIRGINAL The instruments I will for this recording are an Italian harpsichord after Alessandro Trasuntino (Venezia 1531) and a polygonal virginal after Domenico da Pesaro (ca.1550), both built by Roberto Livi. The harpsichord is inspired after the original instrument of Alessandro Trasuntino preserved in the Royal College of Music of London. The instrument is a true inner-outer with sides and soundboard in cypress and goose quills-plectra with a typical deep and transparent sound. The virginal, inspired after an original by Domenico da Pesaro preserved in Berlin, is a typical Italian 16th-century polygonal virginal, with sides, soundboard, and bridges in cypress, with gull quills-plectra. The extreme lightness of the structure and the total absence of ribs on the soundboard contributes to a round sonority over the whole compass.

THE RECORDING The recording will take place in the  church of Avusy (Switzerland) in the last week of June 2017 and the post-production (editing, mastering, liner notes, publicity) will last longer until the releasing of the CD, which is expected in 2018 on the Dutch label Brilliant Classics.

I think that recording Valente’s collection illuminates a significant repertoire for Renaissance keyboard, giving it back to the modern listener with passion and enthusiasm.

Recording a CD requires large financial investments and equipment. The collection of funds will be used to pay only part of the following:

- rental of equipment for recording and sound engineer 3200 €

- renting a place to make the recording, travel expenses, displacements of the harpsichord and virginal, accomodation  1000 €

Of course, this budget does not cover all costs of a recording project. Still, it has to be covered the costs of post-production especially  the mixing and mastering of the recording.

Thank you very much for making possible this recording!

All my gratitude, a personalized Thank You email; PLUS a signed copy of my first solo CD "Giovanni de Macque: the keyboard school at Gesualdo's court" Brilliant Classics 94998, shipping cost included.