▲ I am making a new record this summer in New York city with Roger Greenawalt, help me share it with you! ▲ 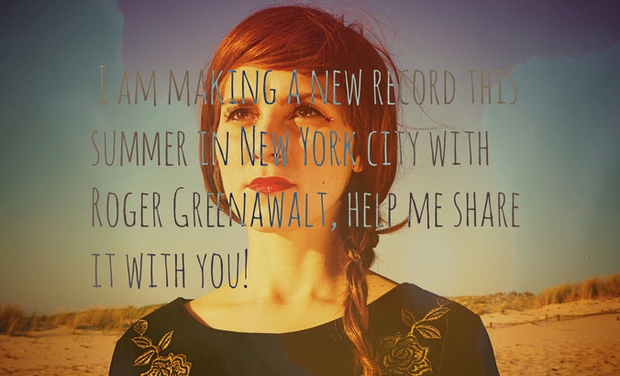 Ayla is the prism through which Millepied's organic flow of encounters with all kinds of artists and creative individuals is catalysed and crystallised into an ongoing series of autonomous projects. Her recent move to the city of Toronto, Canada results of Millepied's aspiration to ever enrich her already broad and eclectic musical background with new sensibilities.   Ayla Millepied's influences range from Chico Buarque to Lizzy Mercier-Descloux, Laurie Anderson or even the proto-Gregorian polyphonic chants of Perotinus. The rhythmic colours of Afro-Caribbean music could not be less strange to her, as she spent most of her childhood on the island of Mayotte, this before moving back to France, where she has been touring with Metal band Lyre for a couple of years until she co-founded, in 2009, the French World-Pop band April Shower.

Ayla is currently working new songs, written and composed between Southwestern France and Dominican Republic. With lyrics in French,English and Japanese.

This first project will give rise to Millepied's favourite and prime instrument, her voice, in a way that characterises her idiosyncratic relationship with the World

I am making a new record this summer in New York city with Roger Greenawalt, help me share it with you!  (>‿◠)✌

With this Kisskissbank i want to record  new  songs i've been working on in Dominican Republic .

After quiting my former band I stopped making music for about a year and a half and I totally lost my North.

There's a wonderful expression in French that, in translation, best describes what ensued:

When you suppress what comes naturally to you, it comes back galloping.

My recent move to the American continent, results of my aspiration to ever enrich my already broad and eclectic musical background with new sensibilities

Now, i am  ready to get into the studio and LAY IT DOOOWN.

I will have the chance to work with a producer by the name of Roger Greenawalt who has worked with Iggy Pop, Allen Ginsburg, Rufus Wainwright, Nils Lofgren, Albert Hammond Jr, Ben Kweller, The Pierce's, Nellie McKay, Adam Green, Philip Glass, Rick Ocasek, Sophie B. Hawkins, Ashley MacIsaac, Eve's Plum, Branford Marsalis and many others....

It has been a DREAM for years!

I've been hoping I'd get to work with him and now it's finally happening!!

I really can't tell you how much i will  appreciate your support.

Backing doesn't just make you a backer it makes you a part of the project WE ARE ONE.

If I could put a gif in here it'd be the scene in Lion King where Rafiki holds Simba up for the whole kingdom to see. You are Rafiki and i am Simba.

It is entirely up to you. But i'd prefer the former !!

In return for your love and awesomeness   I'll give you very fun/cool/totally unique gifts in return such as:

-I’ll send you  of the songs before it’s released

-You can come PERFORM with me  on a song during a  live performance,it's a fun trade!

I will be personally putting together all the packages, writing the thank you notes and keeping all my backers updated along the way.

Anyways, you get the idea.

I had a BALL coming up with ideas for gifts and I'm SO excited about them, I hope you will be too.

I appreciate any donation you can give and please SPREAD the word.

Thank you so much in advance for your support. It means the world to me.

▲Les contreparties précédentes Je vous appelle(Skype) vous ou un de vos proches pour vous souhaitez un joyeux anniversaire en chanson. + Une vidéo dédicace ▲All prizes listed above Play/sing HAPPY BIRTHDAY to you or whoever you want to give the present to on the phone on their special day. +A special video for you

▲▲▲▲ ▲▲▲▲ ▲Prizes listed Above ▲You can come PERFORM with me on a song during a live performance. ▲ Special Thanks added on the EP ▲▲▲▲ ▲▲▲▲ ▲Les contreparties précédentes Tu peux venir t'inviter avec moi sur scène ▲Remerciments sur l'EP.